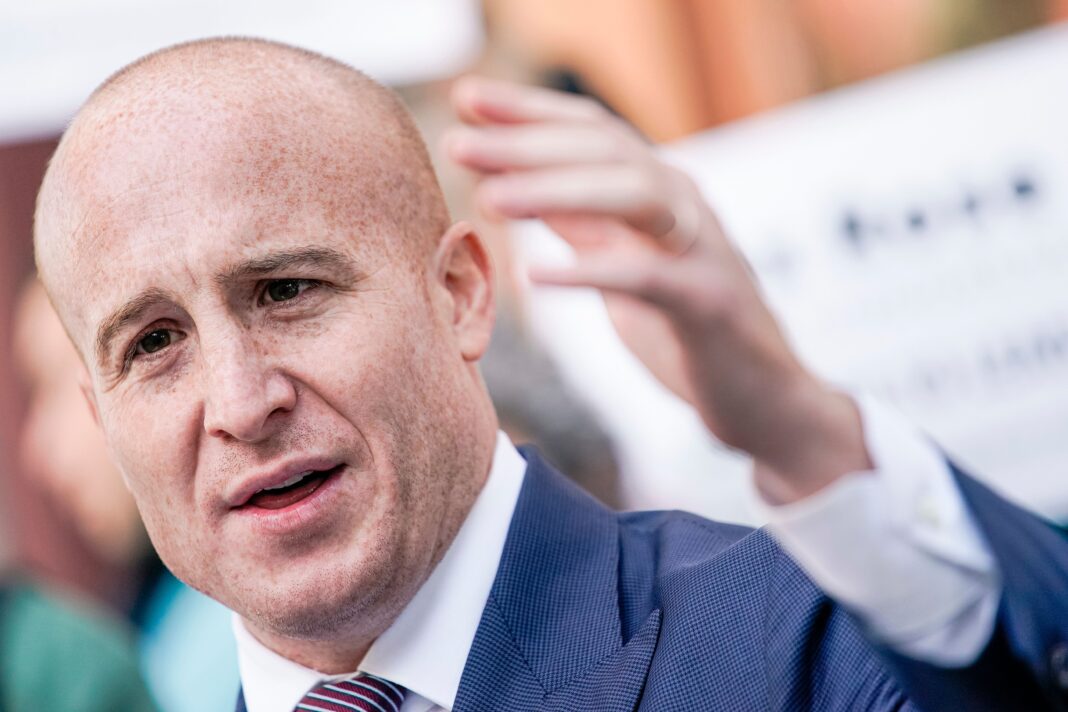 Former Rep. Max Rose (D-N.Y.) has made support for abortion rights a central part of his campaign to retake New York’s 11th Congressional District from Rep. Nicole Malliotakis (R-N.Y.), who unseated him in 2020.

But on Tuesday, Rose’s campaign is due to take its attacks on Malliotakis’ abortion rights record to a new level with a simple, hard-hitting television advertisement accusing Malliotakis of endangering pregnant women.

Rose’s 30-second spot, “Coming Home,” opens with a black screen as the narrator says, “I’m sorry there’s nothing we can do for her.” We then see the back of a man’s head, sitting in the driver’s seat of a car, overlaid with the sustained beep of a heartbeat flatlining. The man’s wife, we are led to believe, died in childbirth because she could not receive an abortion for health reasons.

After the widower returns home, he sits on his bed with his back to the camera. Text appears on screen saying, “Nicole Malliotakis voted to let states ban abortions with no exceptions.”

Then, as the man turns off the light in his room, a second line of text pops up beneath the first: “Even if it means the mother will die.”

Rose is also due to release a second TV ad on Tuesday, “No Way,” which offers a more conventional pro-choice message. The spot features testimony from a Staten Island woman named Kathy who informs viewers she is not “pro-abortion,” but wants her daughters and granddaughter to have the choice of abortion legally available to them.

“Nicole Malliotakis voted to let states ban abortion ― no exceptions for rape, incest or even when the life of the mother’s at risk,” she says.

Following the Supreme Court’s decision in June that there is no constitutional right to abortion, states are free to restrict abortion as they see fit ― even if it means endangering a mother’s life.

Malliotakis has said that she personally supports allowing abortions in cases of rape, incest or where a mother’s life is in danger.

But her legislative career offers no evidence to counter the claim that she would allow states to ban abortion in all cases.

As a member of Congress, Malliotakis did not vote for a Democratic bill enshrining abortion rights in federal law, and has not said how she would vote on a 15-week abortion ban introduced by Sen. Lindsey Graham (R-S.C.). As a member of the New York state Assembly in 2019, Malliotakis also voted against a bill to codify abortion rights in state law, citing, among other objections, a clause permitting non-doctors to perform abortions, and claiming it went beyond codifying Roe v. Wade.

“Plain and simple, in the absence of codifying Roe v. Wade into federal statute, you are letting states ― this is a reality ― enact abortion bans with no exceptions,” Rose told HuffPost in an interview. “The facts are on our side here.”

“This isn’t hard-hitting. It’s just quite frankly a statement of reality,” he added. “It’s a matter of freedom that every woman is deserving of to make her own reproductive health care decisions.”

On paper, even Oklahoma, which has adopted the strictest abortion ban in the country, provides an exception for the life of the mother.

But abortion rights advocates warn that forcing women to prove that they are medically eligible for such an abortion risks denying them access to a lifesaving termination of their pregnancy, or even other medical remedies.

Already some health care providers in conservative states have made it harder to obtain certain kinds of treatments for miscarriages, ectopic pregnancies and postpartum issues as they seek to avoid running afoul of new abortion restrictions.

Rose faces an uphill road to retaking New York’s 11th, which includes all of Staten Island ― the only GOP stronghold in New York City ― and a relatively conservative sliver of southwest Brooklyn.

He lost to Malliotakis by 6 percentage points in 2020, outperforming Joe Biden, who lost to then-President Donald Trump in the district by more than 10 points.

This year is expected to be an even more favorable election cycle for Republicans, who are in a strong position to take control of the House. Historically, the party in the White House loses seats during midterm elections, and Republicans need to flip just five seats to gain the majority.

But Rose is one of several Democratic candidates betting that the Supreme Court’s Dobbs decision in June, which overturned Roe v. Wade, has turned the tide in Democrats’ favor.

At least one Staten Islander who passed by Rose distributing campaign literature at the ferry terminal on the morning of Sept. 23 told HuffPost that concern for abortion rights could convince him to vote for Rose.

Glenn Griffin, a retired firefighter from the St. George neighborhood, described himself as an independent centrist and said that the Dobbs decision was “wrong.” He voted for Malliotakis in 2020, but is now reconsidering, partly out of concern for abortion rights.

“It’s [women’s] bodies,” he concluded. “They should decide on what they would look to do with their bodies.”