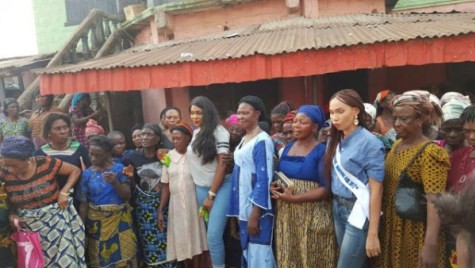 Ex-Most Beautiful Girl in Nigeria Isabella Agbor Ayuk, has come to the aid of a certain widow who was thrown out of her home by the children of her late husband.

The 2102 beauty MBGN winner came to the aid of one Mrs. Rose Leku Asigbe who had to fend for, and take care of her six children at one of the most feared flood torn area in Bendeghe-Afi community of Cross River State.

Ayuk and her Isabella Ayuk Foundation, IAF team were out at the beginning of the year on a five day charity outreach on indigent widows and Cameroonian refugees displaced by crisis in southern Cameroon. During the outreach which began last Thursday, the team came face to face with Asigbe and her children’s untold condition.

Accessing Bendeghe-Afi community where the widow resides was not a thoroughfare for the IAF team as they had to traverse three communities of 24km of poor road access and were ferried on canoe across Bendeghe-Afi river to be able to reach Asigbe.

The widow, who originally hails from Obudu, did not have a choice but to give out her children as house helps and according to her, she does not even know their location.

Asigbe said she did it all for the survival of her remaining three kids, who are still tender in her arms.

Ayuk and her team, apart from the fact that they renovated the home for the widow, they also went further to open a small scale business for her. She became overjoyed and thanked the beauty queen for her kind gesture.

After the meeting with Asigbe, Ayuk and her team also visited more than 200 widows at Bendeghe-Ekeim. They were gifted with food materials, clothing and other items and they all had a great time with the beauty queen as they merried off their sorrows.