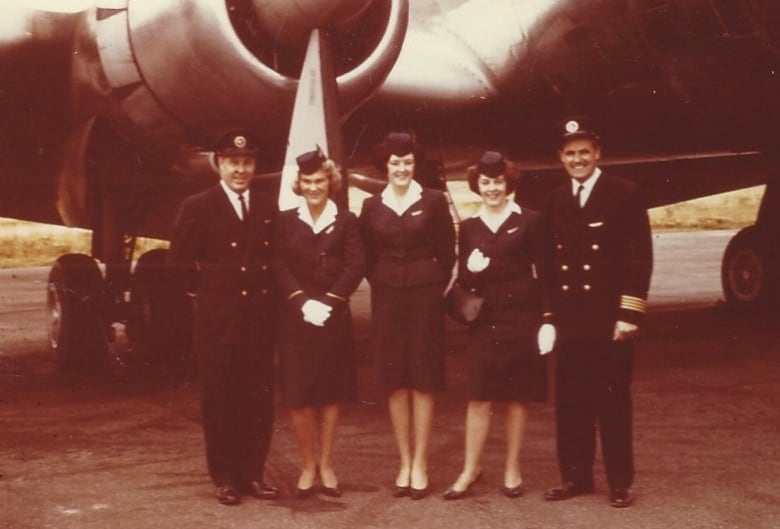 A former flight attendant who worked for an airline that flew Indigenous children to residential schools is sharing some dark memories.

Sharon Gray, who lives in Winnipeg, worked for Pacific Western Airlines for 14 years in the 1950s and ’60s. She said it was during that time she witnessed Indigenous children on flights destined for the schools.

Gray told CBC News that she flew on Douglas DC-3s in the N.W.T. on a few occasions, and one of the flights was full of Indigenous children.

“They [the flights] were all hard to work,” she said. “The emotions were just unreal.”

While there are few historical records documenting the role of the companies and planes in bringing Indigenous children to the schools, people studying the aviation industry’s involvement say they were an integral part of the system.

Gray originally shared her story with Niigaan Sinclair, a columnist for the Winnipeg Free Press.

She told CBC News that she wasn’t aware of the devastation that the residential school system caused Indigenous people until recently, when the remains of an estimated 215 children were found in unmarked graves on the site of the former Kamloops Indian Residential School in B.C.

After the discovery, Gray wrote to her member of Parliament, Marty Morantz, asking him to urge Prime Minister Justin Trudeau to obtain all residential school records kept by churches involved in operating the schools — including the Catholic Church, which has been hesitant to disclose documents.

‘They were in tears’

Gray’s letter recounts what it was like aboard a plane all those years ago. Despite being unaware of what waited for the children at school, she said it seemed “like there was more to the story.”

“Almost all of the children were sick,” she said, reading from the letter on CBC N.W.T.’s morning show, The Trailbreaker. “We ran out of sick bags and all were in tears. As I was walking up the aisle, a little boy in the aisle seat turned and vomited and I walked right through it. I was talking to two little girls near the back of the airplane. They were in tears.

“I am in tears writing this as the memory is still with me.”

While the Truth and Reconciliation Commission studied the aviation industry’s involvement in the residential school system, it encountered roadblocks, as few workers came forward to provide testimony.

Gray told CBC News that perhaps stories like hers can help.

“I wish the commission had contacted me because I would have done probably more work for them,” she said. “Maybe what they’re seeing now, too, is maybe this is going to come to light enough that something will be done.

The NWT Help Line offers free support to residents of the Northwest Territories, 24 hours a day, 7 days a week. It is 100% free and confidential. The NWT Help Line also has an option for follow-up calls. Residents can call the help line at 1-800-661-0844.

In Yukon, mental health services are available to those in both Whitehorse and in rural Yukon communities through Mental Wellness and Substance Use Services. Yukoners can schedule Rapid Access Counselling supports in Whitehorse and all MWSU community hubs by calling 1-867-456-3838.