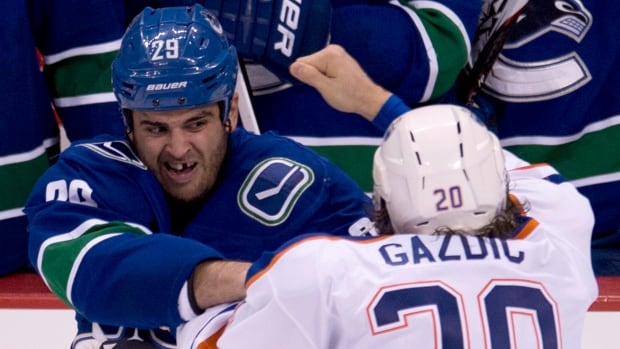 Former Vancouver Canucks enforcer Tom Sestito says the amount of Toradol and Ambien he was given during his NHL career was “insane.”

The now-retired player made the comments on Twitter in response to Vegas Golden Knights’ goalie Robin Lehner tweeting that “many other teams” give out benzodiazepines and Ambien — medications typically used to treat insomnia — to players without prescriptions.

“Good for @RobinLehner standing up for the greater good, I can only speak for myself, the amount of vitamin T (Toradol) and Ambien I was given is insane. As the NHL is getting a lot younger these kids should know what they are walking into,” said Sestito.

Sestito played 154 games in the NHL, including 103 games with Vancouver where he led the league in penalty minutes during his first Canucks season in 2013-14.

He also spent time with the Columbus Blue Jackets, Philadelphia Flyers and the Pittsburgh Penguins.

Through his agent, Sestito declined an interview request.

Good for <a href=”https://twitter.com/RobinLehner?ref_src=twsrc%5Etfw”>@RobinLehner</a> standing up for the greater good, I can only speak for myself, the amount of vitamin T (Toradol) and Ambien I was given is insane. As the NHL is getting a lot younger these kids should know what they are walking into.

In a follow up tweet he talked about how, as a fringe NHL player, he was once given a bottle of Toradol. He did not specify where he was playing at the time.

…”after taking them I felt amazing. Not a pain in my body, you’re taught to believe that the doctors have your best interest where that’s not always the case. And no they don’t explain all the drugs they provide.”

Overuse of Toradol has been reported across a number of professional sports.

Sestito said it took him close to a year of being off Ambien “to learn how to sleep again.”

He gave credit to the Pittsburgh Penguins, the final NHL team he played on, for helping wean him off the drugs.

“…there are great organizations in the NHL, @penguins  team of doctors were the ones to get me off all that shit, and were dumbfounded as to why I had all of it to begin with,” he tweeted.