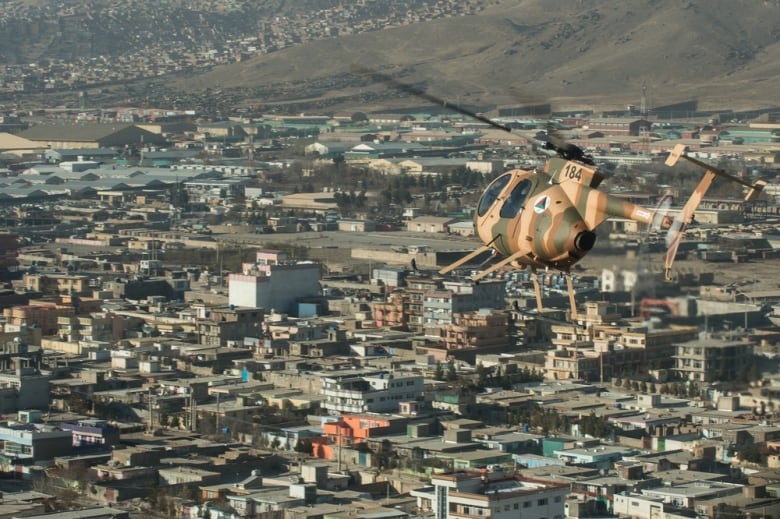 As darkness fell a week ago Sunday, the Taliban had them totally surrounded.

There was no way out of the Kabul airport the night the Afghan government fell. For a dozen military pilots, there was only one thing left to do — fly.

In the weeks leading up to the government’s capitulation, the Taliban had carried out a brutal assassination campaign that killed several of the pilots’ comrades.

“They will kill us,” one of the NATO-trained pilots, now in hiding in Tajikistan, told CBC News. “We are sure they will kill us because we are fighter pilots.”

Twelve pilots and one aircrew chief tumbled into one of the Afghan Air Force’s single-engine AC-208 Eliminators, known by their crews as a ‘Cessna with Hellfire,’ a reference to its air-to-surface missile.

The plane taxied for takeoff just as the first desperate wave of Afghan civilians fleeing the Taliban reached the edges of the runway — “a lot of people who were just running to the aircraft,” said the pilot.

Roaring into the night sky, they left behind them a dark, chaotic city where sporadic gunfights and tracer fire marked the last gasps of the democratically-elected government they had sworn to defend.

CBC News interviewed three of the pilots via cell phone from Dushanbe, the capital of Tajikistan. Their identities have been verified through military records, but their names are being withheld to protect their lives and the lives of the families they left behind in Afghanistan.

The group of pilots includes those who have flown AC-208s, MD-530 attack helicopters and the UH-60 Blackhawk.

They are still wearing the flight suits they escaped in and say they have no access to the Internet to contact their families.

Authorities in Tajikistan, which shares a 1,350-kilometre border with Afghanistan, said that several Afghan military planes carrying more than 100 aircrew and soldiers have landed at various airports. Separately, a week ago, another Afghan military plane crashed in Uzbekistan. It’s not clear whether it was shot down.

Although they’re not under guard and are free to move around in Dushanbe, the aircrew who spoke to CBC News said they are afraid the authorities in Tajikistan will hand them back to the new Taliban regime — either at the behest of the Russians, who made it clear this weekend they want no part of a refugee crisis, or as a goodwill gesture to the new government in Kabul.

‘They would take their revenge’

One pilot, who was a small boy when the Taliban were last in power, said he remembers their brutal ways and has no illusions about the fate that would await him in Afghanistan.

“I killed them,” he said. “I rocketed them. I shot them. I am sure if I killed someone they would take their revenge and kill us.”

All 13 aircrew are asking for asylum in Canada and the federal government’s help with rescuing their wives, parents and children from the grip of the Taliban regime.

“All of us here … we want to exit to Canada,” said the first pilot, who had flown the AC-208 in combat since 2017. “We need help. We request the Canadian government to help us and to take us out from here.”

Even though some of them trained in the United States, none of the pilots expressed interest in immigrating there after U.S. President Joe Biden claimed that “the Afghan military gave up, sometimes without trying to fight.”

It’s hard to fight when you have no ammunition. All three pilots said their stock of missiles and other munitions ran out weeks ago and they had been reduced to flying intelligence, reconnaissance and surveillance (ISR) missions, watching in horror from the air as the Taliban advanced.

One pilot, who also flew the light AC-208, said that as the end approached and the Taliban prepared to storm the airport, he and his comrades had to make a choice: wait to be captured and die a futile, meaningless death, or flee in hopes of surviving and eventually seeing their families.

“We didn’t want to die in Kabul,” said the pilot, a five-year air force veteran. “We left our families behind and we are sick about it.”

He said their families do not know whether they are dead or alive.

‘We didn’t have any chance to fight’

There was bitterness in the voice of a third pilot who spoke to CBC News. He said they were helpless in the final days of the fight, as the Taliban encircled Kabul and moved in to finish off the western-backed government.

“We didn’t have any chance to fight with them because there was no rockets,” said the pilot, who flew MD 530 Defender helicopter gunship.

The Afghan Air Force, once the crown jewel of the U.S.-led NATO training mission, was supposed to be the trump card over the Taliban, supporting troops on the ground holding back the militants.

As the U.S. withdrawal accelerated last spring, the Afghan forces’ reliance on American and foreign contractors — to repair, maintain and fuel their aircraft — led to confusion and crippling shortages. It was a void the Pentagon was scrambling to fill as late as June.

The absence of airpower left Afghan troops on the ground alone to face the Taliban.

American and Canadian forces, along with the other western armies that fought in Afghanistan, relied heavily on missile-armed fighters, helicopter gunships and unmanned Predator drones to beat back insurgent attacks.

Handicapped by shortages, the Afghan Air Force sustained a final blow in early summer: a Taliban campaign to assassinate pilots which spread terror and confusion within the ranks.

“I believe the Taliban were going after anyone who had a higher military education,” said retired Canadian major-general Denis Thompson. “That resulted in a number of targeted assassinations.”

The Taliban had no airpower, so “if they could neuter the airpower of the Afghan National Security Forces by taking out their pilots, that would be a legitimate — from their perspective — military aim,” Thompson added.

The federal government has announced that — in addition to a special immigration program for former interpreters who worked for the Canadian military and diplomats, along with their families — there would be a targeted refugee program for vulnerable Afghans who face reprisals under the Taliban.

Getting Canadian consular help will prove to be difficult. Canada has no embassy in Tajikistan and all cases are funnelled through the mission in Kazakhstan.