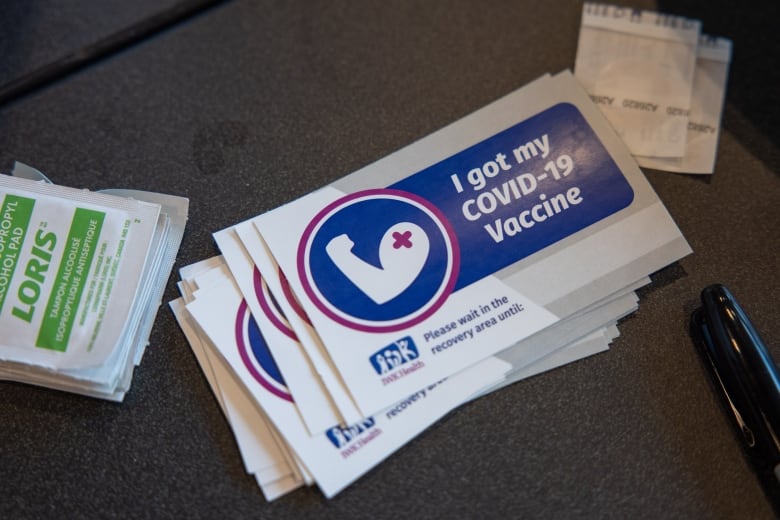 Some Nova Scotians who received a COVID-19 vaccine outside the province say they’re having trouble getting their health record updated to reflect their true vaccination status.

They also say they’re worried that the province’s official vaccination tallies are not accurate.

Scott McKellar, who lives in Dartmouth, said he received his first vaccine dose in early June when he was passing through Florida on his way back from the Bahamas, where he spent the winter.

About a month later, he got his second shot in Nova Scotia.

“When we got our second jab, we were informed that we would not officially be recognized as being fully vaccinated.”

McKellar said he has a card from the U.S. Centers for Disease Control and Prevention stating that he received a vaccine there.

He’s been told that while he will receive a letter from the Nova Scotia Health Department indicating that he’s fully vaccinated, his personal health record will not be updated. However, a note on his file will prevent him from getting another COVID-19 vaccine in Nova Scotia.

Records can’t be issued for those vaccinated elsewhere

Kristen Lipscombe, a spokesperson for the provincial Health Department, said COVID-19 immunization records can only be issued to Nova Scotians who received their doses in the province, but the department is exploring ways to produce records for Nova Scotians who got vaccinated elsewhere.

McKellar said he’s concerned that his documentation could impede his freedom to travel or access other services if a vaccine passport doesn’t show him as being fully vaccinated.

“If I was boarding a plane from Halifax to Tampa, for example. I don’t have the same record as everybody else in Nova Scotia. … Inevitably, somebody is going to show up [and say] … ‘We don’t know if we can let you on the plane because your record is different than everybody else’s record.’ You know, I mean, that type of snafu is just waiting to occur.”

McKellar said there could be hundreds or even thousands of other Nova Scotians who have been vaccinated outside the province. If they’re not included in the official vaccination rates, he worries it could be preventing the province from moving ahead with its reopening plan.

Nova Scotia is currently in Phase 4 of its five-phase reopening plan. Premier-designate Tim Houston announced Monday the province is targeting Sept. 15 as the date to move to Phase 5, which would see most public health restrictions lifted.

Darcy Hoover, a rotational worker who works in the travel industry, received his first shot in Nova Scotia in May and his second shot in Nunavut in June, but he’s still getting emails telling him to re-book his second shot, which is scheduled for early September.

He said he’s tried contacting Public Health multiple times to update his record but has had a hard time getting through on phone lines.

“It’s impossible. There’s no easy way to say, ‘Hey, I got vaccinated somewhere else,’ ” said Hoover, who lives in Fall River, about 23 kilometres north of Halifax.

Hoover said there are tens of thousands of rotational workers in Nova Scotia, and many of them may have received a vaccine dose in another province.

He said it’s possible that Nova Scotians have been living under restrictions that would have been lifted by now if people who were vaccinated elsewhere were included in official statistics.

“There’s a whole pile of us that are. But there’s no record of it in our system.”

Hoover said he eventually got an email back from Public Health saying they would update his record “at some point.”

Nova Scotia’s overall vaccination rate also does not include the 8,000 or so members of the Canadian Armed Forces stationed in Nova Scotia, Lipscombe said.