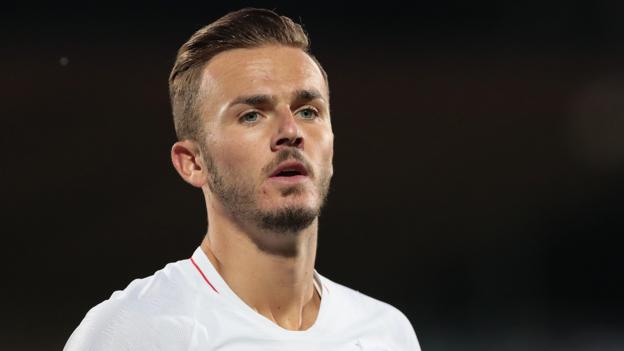 Football News : James Maddison has been named in England’s Euro 2020 qualifiers squad – despite the Leicester midfielder being pictured in a casino after pulling out of the last squad with illness.

England host Montenegro on 14 November and play in Kosovo on 17 November.

Gareth Southgate’s side are top of Group A and need one more point to secure their place at Euro 2020.

Southgate said the “squad is a little larger than normal” because there were a “couple of injury doubts”.

Maddison has been picked in the past three squads but is yet to make his debut for England.

“He’s only been in two squads,” said Southgate. “He had to go home ill last time. We sent him home – he was ill.

“Any suggestion he chose to go home because he wanted to go out is unfair. It’s not a great decision he took [to visit a casino].

“As an England player you have a different profile. Everyone has a camera-phone and wants to make money selling pictures.

“We are supporting him because we have picked him and he has to fight for his place like everybody else.”

“Grealish is a very good player – I’ve watched him closely this season,” he said.

“The reality is he’s up against Raheem Sterling, Marcus Rashford and Callum Hudson-Odoi.

“If we have any issues with the squad I wouldn’t hesitate to call him up. He was very close and just has to keep playing the way he is.”

We need to stop racism in society – Southgate

England’s 6-0 victory in Bulgaria last time out was overshadowed by fans’ racist abuse towards players, forcing the match to be stopped twice.

Bulgaria, who already had a partial stadium closure for that match, have been ordered to play two matches behind closed doors – one suspended for two years – and fined 75,000 euros (£65,000) by Uefa as punishment.

Southgate says the punishment for racism is “really difficult to pitch” and believes it is a wider problem in society.

“For me, the important thing was that the subject was highlighted to everybody, the importance of it, the fact that our players owned the moment, if you want,” he said.

“The people who were in the stadium in Sofia and then left before half-time were nothing to do with football – they saw an opportunity to make a political stand, for whatever reason. That is what happens in society.

“So until we have that situation in society sorted out, then it is going to spill into football grounds because people feel that’s an opportunity.

The England boss says his players want to continue to show the world that they “work as a team”.

“They can see how close the team are, they can see the diversity of the team, the different backgrounds and how they’re just a group of brothers who come together and want to play football and enjoy each other’s company,” added Southgate.

“That in itself is a hugely powerful message for everybody in society.”