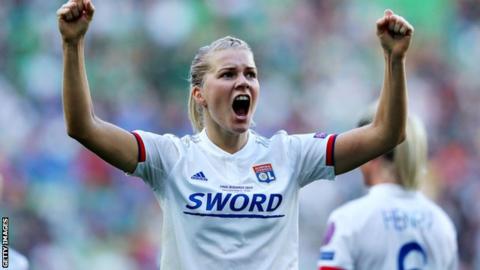 The Norwegian has surpassed the record held by German Anja Mittag (51) and now has 53 goals from 50 appearances in the Champions League.

So where does Hegerberg rank among the world’s best goalscorers?

Hegerberg, who played in Germany before moving to France, has a better goals-per-game ratio in Europe than Brazilian legend Marta.

A hat-trick in last year’s Champions League final moved Hegerberg into the top four of the all-time charts and she leapt above Marta with her treble against Ryazan in September.

The Norwegian is only the second player to score half a century of goals in Europe. Former Wolfsburg striker Conny Pohlers came close with 48 and did so in just 45 games – a record that Hegerberg also overtook.

Who are the top 10 UWCL scorers?

Should Hegerberg continue scoring at this rate, it might be a while before anyone catches her – the other two players still active in the top 10 are both over the age of 30 (France’s Eugenie Le Sommer and Marta).

Hegerberg is the fastest player of either sex to reach 50 European goals – former Manchester United striker Ruud van Nistelrooy did it in 62 games compared to the Lyon forward’s 49.

For comparison, Lionel Messi needed 66 games to score 50 Champions League goals and Cristiano Ronaldo did it in 91.

She also holds the record for most goals scored in a single Women’s Champions League campaign – netting 15 in 2017-18 as Lyon won their third of four successive titles.

That was the second time in four years Hegerberg finished the campaign as Europe’s top scorer, also doing so in 2015-16 with 13 goals.

What about other competitions?

Hegerberg dominates goalscoring in France, too.

The 24-year-old has eight goals in six league matches this season and finished the 2018-19 campaign with 20 goals in as many games – second only to Paris St-Germain forward Marie-Antoinette Katoto in the league.

She was the leading goalscorer for three successive seasons previously, netting over 30 goals in two of those campaigns. Only three other players have scored more in one season over the last two decades.

In total she has scored 218 goals in 217 domestic games, including cup competitions.

Internationally, Hegerberg has not added to her tally of 38 goals in 66 games for Norway since 2017 when she refused to play for them, taking a stand against what she describes as a “lack of respect” for female players in the country.

Hegerberg was a key player for Norway – netting in the quarter-finals of Euro 2013 at the age of 18 and scoring three goals in as many group games at the 2015 World Cup.

But despite missing out on this summer’s World Cup in France, she remains eighth in Norway’s all-time top scorers list – something she achieved by the age of 22.

‘One of Norway’s biggest stars’

Hegerberg’s a big name in Europe but back home she’s even bigger.

Norwegian press describe her as “one of Norway’s biggest stars”, with one reporter – Odd Inge Aas – telling BBC Sport “she has become an example to young girls on how to become something really great”.

It was in 2012 when she started to make people sit up, scoring a hat-trick in the Norwegian Cup final at the age of 17.

She became a household name in 2016, the year she was awarded European Player of the Year, when the photo of her posing with men’s winner Ronaldo made the front pages of the national newspapers.

Hegerberg then became the first recipient of the Women’s Ballon d’Or in 2018.

“People say she only scores against small teams,” added Aas. “But she has scored in three European finals, including a hat-trick last year. That’s not small.

“She has done so much for the women’s game.”