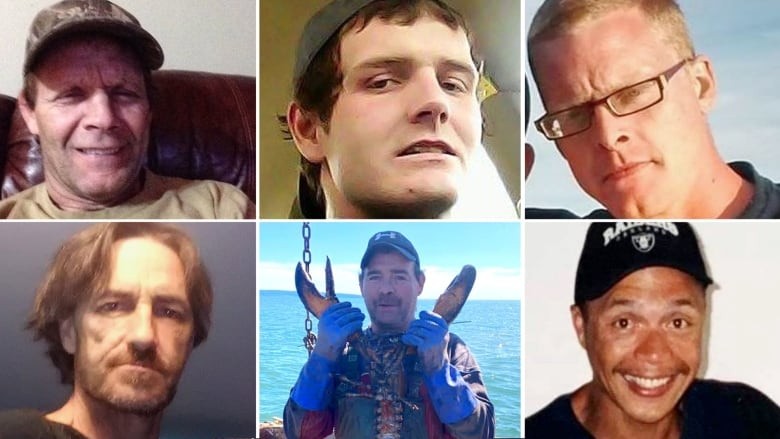 The fishing vessel that went missing off the coast of Delaps Cove in southwest Nova Scotia in December has been found. Five of the six crew members who were aboard the boat are still missing.

The Chief William Saulis, a scallop dragger that was based out of Yarmouth, was last heard from early on the morning of Dec. 15, when it was heading toward Digby after a week-long fishing expedition.

Nova Scotia and British Columbia RCMP underwater recovery teams, assisted by the Canadian Coast Guard and Transportation Safety Board, found the vessel upright 60 metres below the surface, more than two kilometres off the shore of Delaps Cove, on Saturday morning.

The team had targeted an area using side scan sonar and identified an anomaly, according to a news release from the Nova Scotia RCMP on Sunday morning.

A remote-operated underwater vehicle was then used to confirm it was the Chief William Saulis.

The RCMP said because of the depth of the vessel, it cannot be reached by recovery teams. They are determining the next steps to searching the inside of the vessel.

While five crew members are still missing, the body of one, Michael Drake, was recovered the same evening the ship went down.

The RCMP said the families of the five fishermen — Aaron Cogswell, Leonard Gabriel, Dan Forbes, Eugene Francis and the captain, Charles Roberts — have been notified that the vessel was found.

“We haven’t located any of the bodies outside of the water and the shoreline. So now, of course, everyone is hoping that the five missing men are still in the boat,” Nova Scotia RCMP Sgt. Andrew Joyce said Sunday.

A body was located along the shoreline in the area on Friday afternoon, but the person has not been identified. Joyce said Sunday the RCMP do not believe the body found is a missing crew member.

Stella McAuley, the girlfriend of Leonard Gabriel, said she was contacted by police when the boat was found.

“I just wondered if he was in the bunk, you know, because he was going to go to bed. He called me at 12:22 a.m. I was on the phone with him only a few hours before it happened,” she said.

McAuley said she’s hopeful that Gabriel and the other fishermen are still on the boat.

“It doesn’t seem real. I keep expecting him to come home,” she said.

Lori Cogswell, the mother of Aaron Cogswell, said her “heart stopped” when she got the call.

“It’s almost like hearing about the accident all over again. It’s almost as bad as the first day I heard about it,” she said.

Cogswell said she’s hoping the boat will be searched and the bodies of the missing fishermen will be recovered.

“You can only hope that they’re with the boat.”

‘Closure is so important’

Pam Mood, the mayor of Yarmouth, said she hopes the discovery of the fishing vessel can allow the families to start healing.

“They are still going through a great deal and they will for quite some time,” Mood said.

“You know, I’ve often said this, you don’t get over something like this. It just becomes a part of who you are as a person, as a family, as a community.”

This isn’t the first time the area has lost fishermen at sea.

In February 2013, five young Nova Scotian fishermen were killed when a wall of water crashed into the Miss Ally during a storm, capsizing the boat and rocking the small communities of Cape Sable Island and Woods Harbour.

The bodies of the five crew members were never recovered.

“The Atlantic is unforgiving. It’s heartless. It’s cruel. It’s all those things. And yet it provides us our economics and a living for so many people. The ability to find the vessel and the souls that were lost — I don’t think that’s an easy thing. It doesn’t happen often,” Mood said.

She added that when vessels and fishermen are recovered, it’s a blessing.

“Closure is so important to family members and the entire community, so we’re thankful that the search continued and that [the RCMP] will keep doing what they do.”