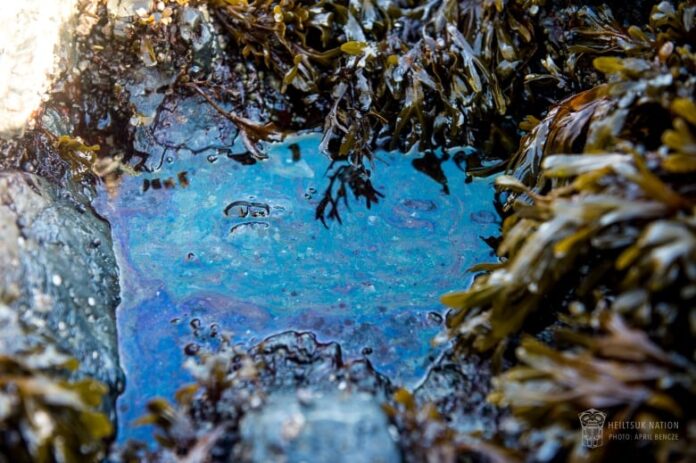 Six years after a devastating diesel spill underscored its dependency on fossil fuels, the Haíɫzaqv (Heiltsuk) Nation in western B.C. says it is moving towards energy sovereignty and decarbonization, introducing everything from heat pumps, solar panels and solar composting to its community.

On Oct. 13, 2016, the Kirby Corporation’s Nathan E. Stewart spilled an estimated 110,000 litres of diesel and another 2,000 litres of lubricants after it ran aground in the Seaforth Channel near Bella Bella, B.C., the largest community in the Heiltsuk Nation.

The nation went on to sue the multibillion-dollar corporation in 2018, but says federal and provincial assistance have been hard to come by in the years since the spill devastated clam beds in the nation’s traditional territory.

Q̓án̓ístisḷa (Michael Vegh), the energy implementation advisor for the Heiltsuk climate action team, says that was some of the motivation behind the nation’s subsequent clean energy projects.

“I think [the spill] brought into the community consciousness just how real the risk is when we are shipping in oil and diesel to heat our community,” he told CBC News.

“Today that’s simply not a risk that we have to take anymore and we can find alternatives to doing so … we’re not just stuck in our trauma from that event anymore. We’re taking action.”

The story of the Heiltsuk Nation, located relatively far from urban centres and therefore having to rely on imported energy, is not uncommon across Canada.

Vegh says one of the major priorities in the nation’s climate strategy was to address home heating, which constituted 60 per cent of the community’s greenhouse gas emissions, primarily due to heating diesel.

Now, around 75 per cent of Bella Bella’s homes have energy-efficient electric heat pumps installed — with Vegh estimating that the average household is saving $1,500 in heating costs and producing five fewer tons of greenhouse gas emissions per year.

“At a very household level, the heat pumps are creating a better source of heating in homes and creating a greater air quality which reduces respiratory issues,” he said. “It’s making having a home in the community that [much] more affordable.

“Our climate action goals … ensure that all the means of energy and transportation and resources in our community are sustainable and not going to cause harm to our way of life.”

She said the nation was in talks to buy the hydroelectric plant outright, as a part of solidifying Heiltsuk’s energy sovereignty.

“They’re trying to sell it to us for over $12 million,” she said. “It shows the financial inequalities that still exist between settler society and Indigenous societies, and also the value systems.”

Brown says the community still had backup diesel generators for when the power goes out, which she says is “quite often” in Bella Bella as the plant was at capacity.

Now, one of the buildings in the community, the Kunsoot Health and Wellness Centre, is powered entirely by solar panels, including its toilets — something Brown says is a marker of things to come.

The Heiltsuk First Nation Climate Action Plan has stood out federally for the scope and quantity of its proposed projects. It won Clean Energy B.C.’s Community of the Year award in May.

The nation is one of the participants in the federal Indigenous off-diesel initiative, which helped contribute $1.8 million to projects including the solar-powered community centre.

“When I think about the inequalities that exist within Canada, I know that this is a unique story and shouldn’t just be a beautiful, unique story,” Brown said. “It should be the standard, it should be the bare minimum for every First Nation.

“We are a small community of about 1,600 people. Our carbon footprint isn’t huge, but what we hope is that other communities, other municipalities can look at what we’re doing.”

According to Natural Resources Canada, there are 224 “remote” communities in Canada that are reliant on diesel. More than 70 per cent of those communities — 162 in total — are Indigenous communities.

“The long-term plan is to be able to support all communities to reduce their reliance on diesel wherever, whenever it’s possible,” said Éric Lévesque, a policy development manager at the department.

“Over the past years … we’ve supported over 130 communities.”

The Heiltsuk Nation is undertaking a plan to wean itself off fossel fuel.