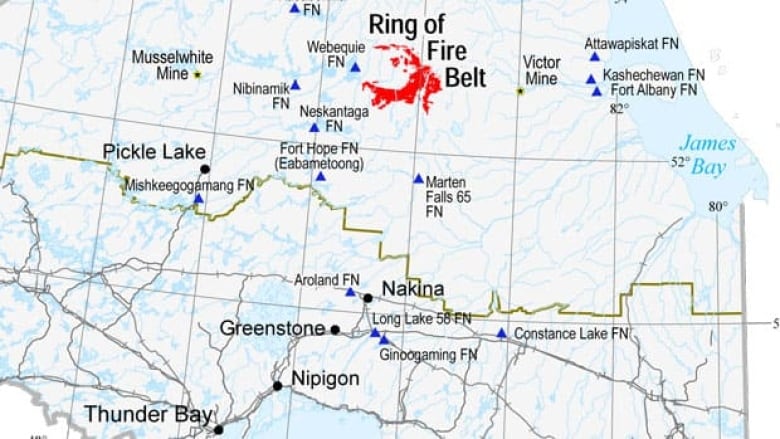 A Treaty 9 First Nation is calling on the province’s auditor general to investigate government spending on the development of a large mineral deposit in northern Ontario.

Neskantaga and a legal clinic with York University’s Osgoode Hall have requested a “value-for-money audit” into government spending on roads and development projects in the Ring of Fire area, located about 540 kilometres northeast of Thunder Bay.

The public should be made aware if their government is spending public money on precarious mining investments with dubious returns while other sectors, namely health and long-term care, remain chronically underfunded.– Dayna Scott, Osgoode Law School, author of auditor general request

The province considers the area “one of the most promising mineral development opportunities in Ontario in over a century,” yet key questions remain about the roads that must be built through the lands and water systems of several remote, fly-in First Nations.

The Ring of Fire area is roughly 100 kilometres in diameter, and 85 per cent of the mineral claims staked on the Crown land are held by Noront Resources, according to a brief on their website.

Yet questions remain about how much the roads will cost, who is going to pay for them, and who will own them and control access, said Dayna Scott, who wrote the request for the auditor general investigation.

“The public should be made aware if their government is spending public money on precarious mining investments with dubious returns while other sectors, namely health and long-term care, remain chronically underfunded,” wrote Scott, an associate professor and research chair in environmental law and justice with York University.

A spokesperson for Ontario’s auditor general confirmed to CBC News they have received and are assessing the request.

The Ring of Fire mineral area is in the heart of Treaty 9 and made up of chromite, nickel and copper deposits. There is currently no road or rail access to the deposits, so it’s been proposed that three all-season roads through the boreal forest and swampy peat lands of northern Ontario be built.

The 450 kilometres of new roads would connect several fly-in First Nations as well as the mining deposits to the provincial highway network.

Despite the global pandemic, several state of emergencies declared by First Nations in the area, and a moratorium declared earlier this year on all development in the Ring of Fire by three First Nations, the provincially mandated environmental assessments for each of the roads have moved forward in the last 18 months.

It’s estimated the environmental assessments will be complete by the end of 2023, according to project guidelines from Noront Resources, which is courting takeover offers by two Australian mining giants for the lion’s share of mineral claims in the area.

No firm word on cost, ownership of roads

According to the letter written by Scott, the cost of the roads to the Ring of Fire is estimated at $1.6 billion, yet there is “no firm public commitments to Ring of Fire infrastructure funding.”

Greg Rickford, provincial minister responsible for northern development, natural resources and forestry as well as Indigenous affairs, was unavailable for an interview, according to his press secretary.

CBC News asked the province to confirm the estimated $1.6-billion cost, as well as how it plans to pay for the construction of the roads and who will own them.

A statement from the province said the proposed road infrastructure “would be available for both public and private use,” but it did not answer questions about cost or ownership of the roads. Instead, the statement said timelines and cost estimates will only become available after their environmental assessment.

However, documents obtained by CBC News show the province has a cost estimate it’s working with, and it has already asked the federal government for financial support of between $557 million and $779 million.

Rickford sent a letter and business case for Ring of Fire development to Infrastructure Canada on July 18, 2019, according to an access to information request released in August. It was estimated the overall cost would range from $1.1 billion to $1.6 billion, including funding for road planning and construction costs, environmental assessments, support for participants, and funding for well-being initiatives in nearby First Nations.

The business case includes a preliminary estimate for road planning and construction costs coming in at an average of $2.69 million per kilometre, based on technical studies completed by Hatch and Morrison Hershfield.

Shortly after the Ring of Fire mineral deposits were discovered in the late 2000s, Scott said, the mining companies involved in the early rush had proposed to take responsibility for developing the transportation corridor to get to the deposits, development of the mine and completing required environmental assessments.

But in recent years, the burden of paying for construction of the roads and the environmental assessments seems to have shifted to government and taxpayers, she said.

“That’s the kind of issue we want to have clarity on.

“At what point did it become accepted that — instead of the mining companies that want to profit from the extraction of these minerals paying for the road to access them — that Ontarians would be paying for these roads?”

Scott said she hopes the auditor general, who reports to the Ontario Legislature, will allow for greater accountability and transparency on government spending.

“First Nations communities in Ontario’s Far North — who have been disproportionately burdened by the pandemic and are bearing the heaviest climate change burdens — deserve answers as to how and why Ontario is supporting contested mining developments in their homelands,” concluded Scott in her letter to the provincial auditor general.

This is just the latest effort by Osgoode Hall Law School’s Environmental Justice and Sustainability Clinic to get more information on activities in the Ring of Fire.

A group of organizations — including the legal clinic, Greenpeace Canada, the Council of Canadians and MiningWatch Canada — asked the Ontario Securities Commission in August 2021 to investigate whether the extent of Indigenous opposition to Ring of Fire development has been reported by Noront Resources.

The company has “ownership or a controlling interest of all the major discoveries in the Ring of Fire to date,” according to its website.

The coalition of organizations reviewed Noront’s disclosures from 2015 and onwards.

In their letter to the securities commission, they said “it appears that Noront has failed to provide a fulsome account of the vocal dissent voiced by various First Nations in the region in relation to its assets and projects … with the potential for misleading investors.”

The letter added it hopes an investigation will lead to more accurate reporting by Noront and other companies regarding their relationships with Indigenous communities affected by their business activities.

Noront’s chief executive officer, Alan Coutts, was not available for an interview.

A spokesperson for the Ontario Securities Commission said it could not confirm or comment on the existence, status or nature of any complaint, review or investigation, as a matter of policy.