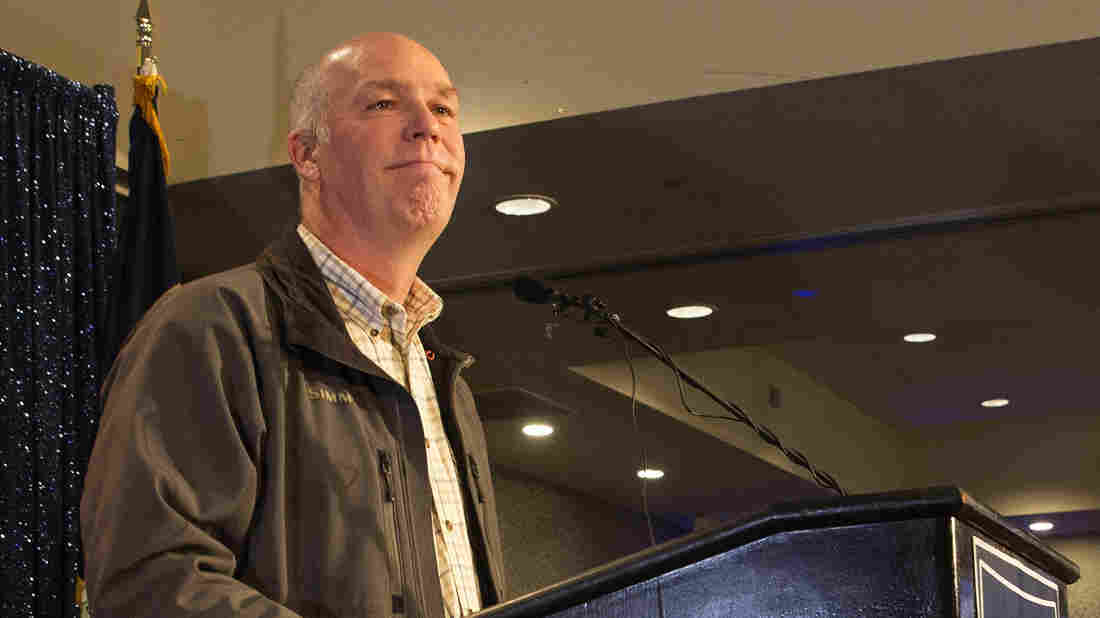 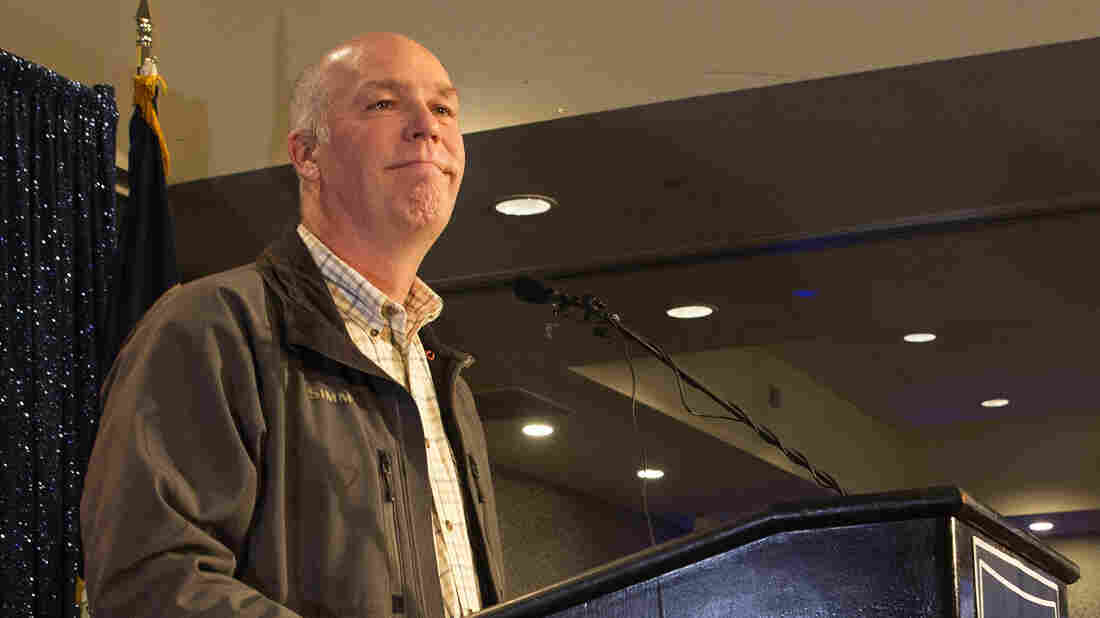 Republican Greg Gianforte speaks to supporters after being declared the winner of Montana’s special election. Was his assault on a journalist a turning point? Janie Osborne/Getty Images hide caption

Republican Greg Gianforte speaks to supporters after being declared the winner of Montana’s special election. Was his assault on a journalist a turning point?

This week’s physical assault by Montana’s new GOP Congressman, Greg Gianforte against The Guardian reporter, Ben Jacobs — who was asking a question about the budget — is the latest example of hostility toward journalists.

But, unlike those others, which only caused tiny blips on the radar of average media consumers, the Jacobs body slam appears to have hurled the American public into a new realm of incivility. The nine-second violent incident — that went viral instantly — has people wondering if an invisible line has been crossed.

Reaction in the social media world, from all sides, raised three questions.

The first: How did we get here?

It was just a matter of seconds after audio of the altercation made it onto the Internet that people began blaming reality TV and the anonymity of the Internet itself as the main culprits behind the erosion of civic discourse. But, for those who were appalled by Gianforte’s overreaction to a straight forward question, the lion’s share of the blame was placed on President Trump’s shoulders for deliberately stoking animosity against the press.

This comes at a time when Trump supporters cheer gleefully whenever the president points to reporters at his rallies and calls them “the enemy of the people” and White House Chief Strategist Steve Bannon refers to the press as the “opposition party.”

And, just two days after the Gianforte-Jacobs incident, Texas Gov. Greg Abbott held up a bullet-ridden target sheet and joked to a TV news crew and a group of photographers and journalists gathered around him, “I’m gonna carry this around in case I see any reporters.”

But, for those who study the influence and impact of rhetoric on the political sphere, a better explanation for how we find ourselves here is that the animosity in the political divide has been fomenting for a very long time.

Deborah Tannen traces the origins of this particular strain of hostility back more than two decades. She wrote about it in her book, The Argument Culture: Stopping America’s War of Words.

“I was making the point then that we are more and more approaching everything in an adversarial spirit,” she told NPR. That’s when we started to conceive of ideas as “warring camps.” That was when widespread use of the war metaphor began. “Think of the ‘war on cancer … war on drugs,’ ” she recalled.

Her approach is one of a linguistics professor and she argues that the use of the word “war” in this context planted a seed that’s in full bloom now: that there’s no middle ground and everything is a battlefield. A familiar sentiment was expressed by voters after the 2016 election.

The second big question: Where’s the ref in all of this?

In the political arena the referee never seems to step forward, although Republican House Speaker Paul Ryan came close this week when he called on Gianforte to apologize.

“There’s never a call for physical altercations,” Ryan said in a news conference. “There is no time where a physical altercation should occur with the press or just between human beings. That is wrong and should not have happened. Should the gentleman apologize? Yeah, I think he should apologize.”

But Ryan was roundly criticized for clarifying that neither he nor Congress could impose any sanctions on Gianforte, should he win. And there are no tangible repercussions for the Montana congressman now that he has won the special election.

Still, nonpolitical organizations have attempted to inject a degree of comity in political races. In 2000, the Interfaith Alliance, which is made up of a group religious leaders of different faiths, created the Covenant of Civility. They got all five of the presidential candidates to sign on — Gov. George W. Bush, Vice President Al Gore, Sen. John McCain, Sen. Orrin Hatch and Sen. Bill Bradley.

Rabbi Jack Moline, who is today president of the Interfaith Alliance, explained that it felt imperative to come up with this type of framework — a code of conduct — because the rancor of President Clinton’s impeachment trial still hung over the campaign.

Which made what happened all the more sad for Moline. Rather than elevate discourse, it triggered a widespread “gotcha” attitude in which each side was quick to rat out anyone who was perceived to have committed a transgression.

“Once it became public, we started getting calls from all over the country,” Moline said. “People were asking us to enforce, what people consider to be violations … and they demanded that Interfaith Alliance step in and call these people out publicly.”

In the end, the Alliance was inundated with complaints. They became overwhelmed and, Moline said, had to reluctantly admit that ultimately, it’s an individual choice whether or not to wade into toxic territory. It wasn’t their place to be the nation’s political hall monitor.

The final outcry: What good is your “sorry”?

Gianforte won the election over his Democrat challenger Rob Quist by about 6 points. The apology to Jacobs came wrapped up in his victory speech.

“When you make a mistake,” Gianforte said to his supporters, “you have to own up to it. That’s the Montana way.”

“Last night I made a mistake,” he added, before being interrupted by jeers and snickering from the crowd. “I took an action that I can’t take back and I’m not proud of what happened.”

Overall, it covered a lot of bases that a good apology should cover, according to Cynthia Frantz, a social and environmental psychologist who conducted a landmark study on apology timing.

But it also contained some flaws, she said. Primarily, the fact that it completely ignored the statement put out by Shane Scanlon, Gianforte’s spokesperson, the previous day in which he blamed Jacobs for the body slam because the reporter had been overly aggressive in asking his question.

“Jacobs entered the office and began asking badgering questions. Jacobs was asked to leave. After asking Jacobs to lower the recorder, Jacobs declined. Greg then attempted to grab the phone that was pushed in his face. Jacobs grabbed Greg’s wrist, and spun away from Greg, pushing them both to the ground. It’s unfortunate that this aggressive behavior from a liberal journalist created this scene at our campaign volunteer BBQ.”

That is a huge omission, leading to an apology fail, said Frantz (and nearly everybody else who heard Gianforte’s seemingly remorseful apology).

As it stands now, Gianforte is headed to Capitol Hill — but not before a court appearance. He’s been charged with misdemeanor assault and could face up to six months in jail. I’m sure Twitter will have plenty to say about that.