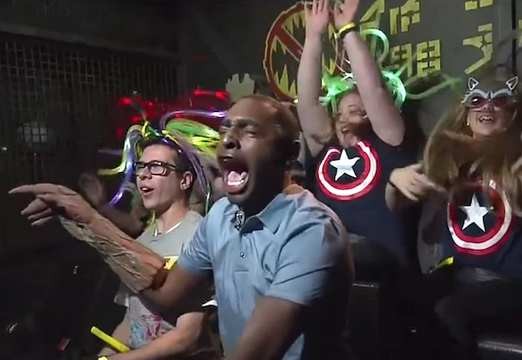 This reporter was not feeling the Disney magic.

Disneyland’s new Guardians of the Galaxy—MISSION: BREAKOUT! ride opened in place of popular drop ride the Twilight Zone Tower of Terror Saturday. Several reporters got a sneak peek of it. One of them, Cory James of ABC30 Action News in Fresno, California, found it particularly terrifying.

He was filmed riding the ride live on TV Friday and could not stop screaming. At one point, he looked like he was about to pass out.

James said on Good Morning America Saturday that he had never been to the theme park before, so he had no idea what to expect from the ride.

“I’m not from California, so this is my first time at Disneyland and in my mind, I always thought, you know, Disneyland is a place for kids under 10 years of age,” he said. “And I didn’t think they had rides of that magnitude there, so I certainly wasn’t expecting that, especially when…the doors were closing. I didn’t even know that we had been lifted on the actual ride, so it was quite a shock.”

“It was like an out of the body experience. I really was not expecting it. I thought that I would get on, Good Morning America – Web Player we would be lifted up and I would be talking all the way up and then would be able to talk while we were dropping. I didn’t know it would be going that fast. Once I felt it and my stomach collapsed, I just kind of lost my mind, as you saw.”

The ride is housed in a 183-foot structure and utilizes the same structure and ride system as the Twilight Zone Tower of Terror, which closed in January after almost 13 years.

The Twilight Zone Tower of Terror rides are also located at the Walt Disney World Resort in Florida, the Tokyo Disney Resort and Disneyland Paris and will not be replaced.