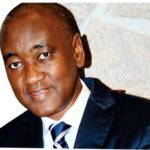 The Nigerian Bar Association (NBA) has faulted the current anti-corruption strategy of the Federal Government.

It suggested an urgent review, with attention directed at strengthening existing investigating and prosecuting agencies.

The group expressed worry that over eight months after some judges were suspended for misconduct, no major progress has been made by the investigating agency.

It called for the discontinuance of such investigations to enable the affected judge resume their official duties.

He said: “It is no longer news that there is endemic corruption in Nigeria. The issue is how we are fighting it.

“While the current efforts by anti-corruption agencies are commendable, it is important to note that the present framework, which is in place for anti-corruption crusade, is defective in structure and does not make for effectiveness of these agencies.

“The NBA still believes that a lot needs to be done in improving the general institutional framework for the fight against corruption.

“Though some successes have been recorded especially following the whistle blowing policy of the government, yet it must be remembered that reliance on this whistle blowing itself is a signal to the overall weakness of policing and anti-crime agencies.

“The NBA therefore calls for more investment in the development of the capacity of anti-corruption agencies. The NBA also calls for greater demonstration of commitment and synergy between the various branches of government.

“As it is, there is clear dissonance between the executive and legislative branches. A situation where the branches of government are unable to agree on the leadership of a key agency of government such as the EFCC is not only unfortunate but highly regrettable.

“This exposes our country to ridicule and questions the commitment of our leaders to the fight against corruption. We call on both the legislature and executive branches to as matter of urgency address the lingering issue of the leadership of the EFCC.

“The NBA also calls on all agencies of government involved in the criminal justice sector to demonstrate a greater level of cooperation and synergy.”