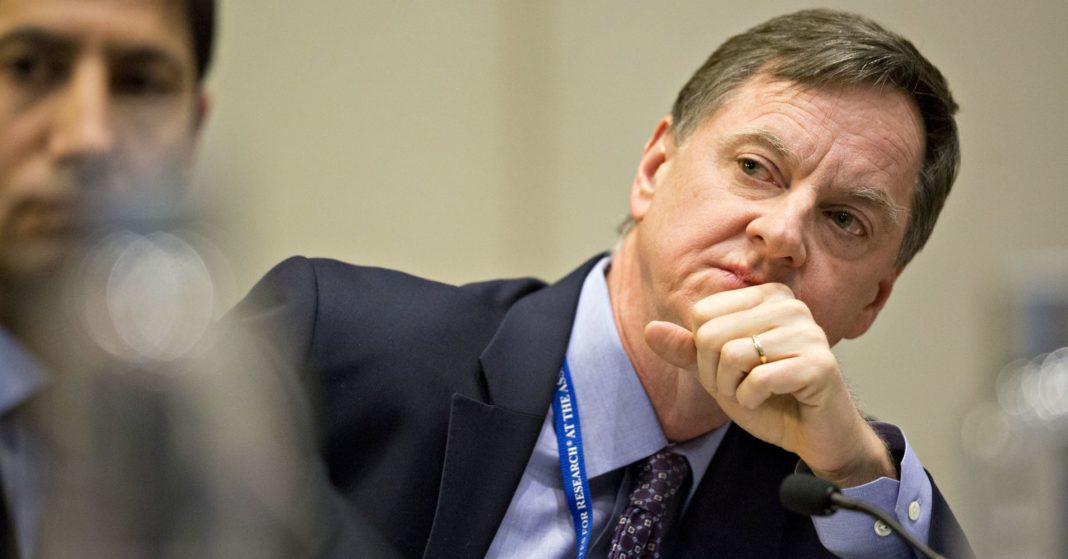 Addressing the markets’ reaction, Evans told CNBC at the Credit Suisse Asian Investment Conference: “I think we have to be a little bit nervous obviously.”

“Whenever the yield curve gets flat, we see growth decelerating and, like I say, I’m looking for almost 2 percent growth this year. That sounds kind of low but it’s actually relative to trend of one-and-three-quarters, it’s a good growth rate,” he told CNBC’s Nancy Hungerford and Emily Tan in Hong Kong on Monday.

“I think anytime the economy decelerates from 3.1 percent down to 2 percent, it takes a really sharp-minded focus to kind of go, ‘All right, it’s less than what we had but it’s still pretty good,'” he added.

Earlier, Evans told a panel at the conference that the world’s largest economy remains robust. “I look at the nature of the U.S economy, I look at the labor market, it’s strong, the consumer continues to be strong,” he said.

The Fed held interest rates steady in a unanimous decision last week, and indicated that no more increases will be coming this year. It was a sharp dovish turn from its policy projections in December.

In a post-meeting statement, the central bank indicated it would remain “patient” before adopting any further rate hikes. It also reduced expectations for GDP growth and inflation and slightly increased the unemployment rate outlook.

Evans said sees economic growth of between 1.75 percent to 2 percent this year. “But it is decelerating from stronger growth,” he said following last year’s 3.1 percent figure.

Still, he said he wasn’t very worried about inflationary pressures or recession — and models he’s seen indicate that the probability of a recession is no more than 25 percent.

“I think it’s a good time to stop, pause, look and see how things are going to progress and be cautious,” he said of the Fed’s monetary policy stance. Evans also added that the Fed is “mindful of financial market constraints” — a “good reason” to pause in raising rates, he said.

Speaking to reporters later, Evans said that the lack of strong inflationary pressures in the U.S. given the robust labor market, slowing foreign economic growth and “fiscal policy waning” in the U.S. are the three main factors backing a pause.

“You put all those things together and it says ‘let’s wait and see how long it takes to figure this out,'” he said.

He also reiterated that yield curve movements bear watching but are not a major concern.

The Fed had kept its benchmark rate near-zero for seven years as it looked to stimulate the housing market and overall economy. That period coincided with the longest bull market on record for stocks.

Fed Chairman Jerome Powell and his predecessor, Janet Yellen, have aimed to hike rates back to a point where policymakers would have leeway to reduce rates to battle any future downturn in the world’s largest economy.

Record low rates were accompanied by a massive bond buying program to ensure liquidity to financial markets. But that came at the cost of ballooning the Fed’s balance sheet to $4.5 trillion, which it has moved to reduce through a program that allowed proceeds from the bonds to roll off each month and that is set to conclude at the end of September.

The Fed came under intense pressure from financial markets at the end of last year to stop raising interest rates amid rising economic uncertainty including the outlook for China’s slowing economy and concerns over President Donald Trump’s trade war with the country.