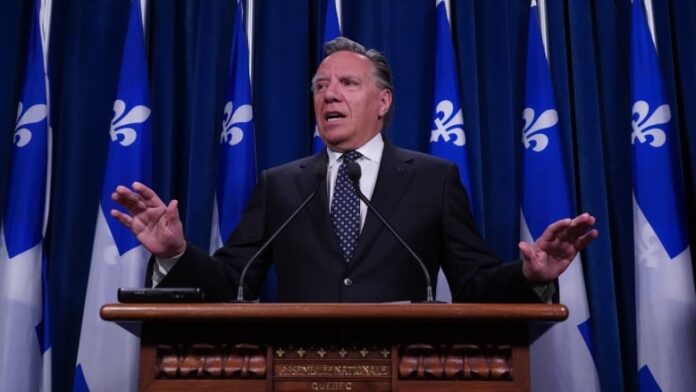 Speaking to reporters at a COVID-19 briefing, Duclos said he’s “very optimistic” that some sort of deal to boost the Canada Health Transfer (CHT) will materialize soon because “there’s been a change of tone, a change of direction in the last few weeks.”

“There’s been a great deal of progress. We need to secure investments so we can maintain the publicly funded and equitable and accessible health-care system,” he said.

CBC News first reported earlier this week that Duclos said a deal for new funding is taking shape and the two sides are “increasingly aligned.”

The premiers have demanded that Prime Minister Justin Trudeau meet with them, face-to-face, to hammer out the final details of an agreement.

There’s a sense of urgency because the premiers are eager to see any new money reflected in the upcoming spring federal budget.

Government sources told CBC News Trudeau likely won’t sit down with the premiers until a deal is almost finalized.

The premiers are looking at holding meetings in Ottawa in mid-February, sources said.

They hope enough progress can be made on a deal to convince Trudeau to join the meetings.

Some provinces, notably Quebec, have balked at the federal conditions.

But Quebec Premier François Legault signalled Wednesday he’s open to giving Ottawa more data about the state of health care in his province.

He said Quebec and Ontario — the other province that has been reluctant to hand over data — are ready to cut a deal.

The federal government wants this data so that it can better track health-care performance and outcomes. They also want data to shared more efficiently between primary doctors, pharmacists, specialists and the hospital system.

Duclos said Canada is “lagging behind” other jurisdictions on the data front.

With so little patient data being shared across the health-care system, Duclos said, some emergency room nurses are “scared” to treat patients without access to digital files.

“It puts enormous pressure on health-care workers,” Duclos said. “They don’t have access to recent tests, or drugs they may be taking.”

It’s not known at this point how much money Ottawa will send to the provinces to help stand up a system that has been hobbled by COVID-19 and the resulting labour shortage.

When asked if the federal government would agree to the provinces’ demand that Ottawa increase its share of all health-care spending from the current 22 per cent to 35 per cent, Duclos punted, saying only that there will be “additional amounts” to spur “additional results.”

If the federal government agrees to the provinces’ terms, that would increase the value of the CHT from $28 billion a year to $45.2 billion.

Duclos said he wouldn’t comment on exact dollar amounts because Ottawa is not interested in “negotiating in public.”

Any new money, he said, will not be used to address short-term issues. The federal government is intent on seeing its cash directed at long-term, structural changes to the system, he said.

Duclos said the sorry state of primary care — nearly 7 million Canadians do not have a family doctor — is an area of particular interest.

Canada’s population is booming, thanks in part to record levels of immigration. The country is also getting older. Those twin challenges, combined with COVID-related labour shortages, have strained the country’s publicly funded health-care system.

To help stabilize the system, the premiers have been asking Ottawa to dramatically increase how much it spends each year on the CHT — the block of money sent to the provinces and territories to fund health services.

The federal Liberal government has said the 22 per cent figure doesn’t reflect the whole funding picture.

In 1977, some tax points were transferred from Ottawa to the provinces, which allowed them to collect a larger share of all tax revenues to fund social programs like health care. Those tax points, Ottawa argues, should count for something.

The federal government also made a series of one-time top-ups to the CHT during the pandemic to help provinces deal with the health crisis.