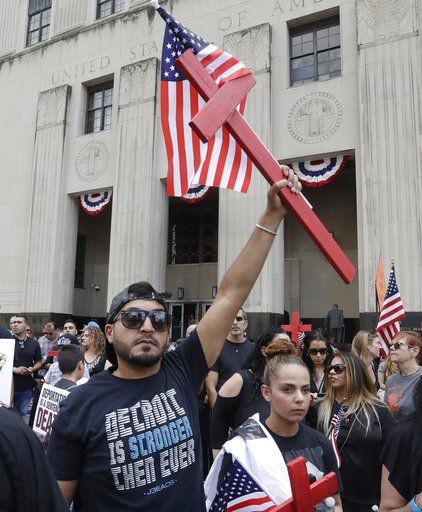 A federal judge in Michigan granted temporary reprieve from deportation on Thursday to more than 100 Iraqi nationals with criminal convictions who were living in the Detroit area. They had argued they could face persecution or torture in Iraq because of their status as religious minorities, The Associated Press reports.

The American Civil Liberties Union, which represented the Iraqis, says they include Christians and Muslims.

“We are thankful and relieved that our clients will not be immediately sent to Iraq, where they face grave danger of persecution, torture or death,” ACLU of Michigan Legal Director Michael Steinberg said in a statement. “It would be unconstitutional and unconscionable to deport these individuals without giving them an opportunity to demonstrate the harm that awaits them in Iraq.”

U.S. Immigration and Customs Enforcement arrested 114 Iraqis in the Detroit area who it says have criminal convictions, according to AP. Many have been in the U.S. for decades. Some came as children and committed their crimes decades ago, Reuters says.

Although the Iraqis had deportation orders, Reuters adds, they were allowed to stay in the U.S. because Iraq would not issue them travel documents. But that changed in March after Iraq agreed to accept deportees in exchange for being removed from the list of countries in President Trump’s revised travel ban.

The news service says the Michigan roundup was part of a broader sweep in which immigration authorities detained close to 200 Iraqi immigrants across the country.

The Justice Department had argued that immigration court is where the Iraqi nationals should make their case — not U.S. District Court. But U.S. District Judge Mark Goldsmith halted the deportations for 14 days while he decides if his court has jurisdiction.

Reuters says a Justice Department spokeswoman could not immediately be reached for comment on the ruling.

The news service reports that the arrests shocked Michigan’s close-knit Iraqi community. It says a half-dozen members of the state’s Congressional delegation urged that the Iraqis be allowed to stay until Congress receives assurances about their safety.

In the meantime, “the court’s action today was legally correct and may very well have saved numerous people from abuse and possible death,” ACLU attorney Lee Gelernt said, according to Reuters.

“The court took a life-saving action by blocking our clients from being immediately sent back to Iraq,” Gelernt said in the ACLU statement. “They should have a chance to show that their lives are in jeopardy if forced to return.”