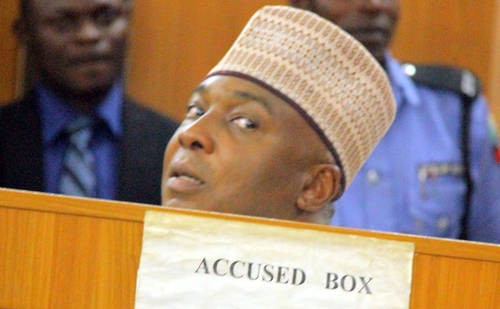 Special Assistant to the President on Prosecutions, Mr. Okoi Obono-Obla, said on Saturday that the Federal Government had finalised its decision to appeal  last Wednesday’s ruling of the Code of Conduct Tribunal discharging and acquitting the Senate President, Bukola Saraki, of charges of false asset declaration.

Obono-Obla, who vowed that no one would be allowed to get away with any act of corruption, said in a telephone interview with our correspondent that the government would file a notice of appeal against Saraki’s acquittal by Wednesday.

The presidential aide, who works in the office of the Attorney-General of the Federation, argued that the two-man panel of the CCT led by Danladi Umar, misapplied the law by adopting the wrong standard of proof in exonerating Saraki.

He said, “Definitely we are going to appeal against the ruling in Saraki’s case. One of our grounds of appeal is that the tribunal misapplied the law. For instance, the standard of proof that the tribunal used is not applicable to charges of false declaration of asset.

“It (charge of false asset declaration) is a strict liability offence, so you cannot apply the standard of proof that is applied in the regular criminal proceedings.

“Surely, we will file the appeal next (this) week Wednesday.”

Obono-Obla had earlier in an interview with The PUNCH, described the CCT ruling discharging Saraki as a travesty of justice, pedestrian and outrageous.

He said on Saturday that the government was resolute in its fight against corruption and would appeal against all the recent “nonsensical” rulings delivered in some high-profile corruption cases.

Obono-Obla said, “We are resolute. We are going to fight this war to the end. We must clean up Nigeria, otherwise the nation is doomed. We have gone back to the drawing board to change our tactics and strategies.

“Anybody who thinks he can get away with an act of corruption is dreaming. We are going to file an appeal against all the nonsensical rulings that we have got from our court in recent times.”

The Code of Conduct Tribunal in Abuja on Wednesday discharged and acquitted Saraki of all the 18 charges of false asset declaration and other related offences preferred against him.

The two-man panel of the CCT led by its Chairman, Umar, unanimously upheld the no-case submission which Saraki filed after the prosecution closed its case with the fourth and the last prosecution witness testifying on May 4, 2017.

There were 48 documentary exhibits said to have been tendered in the course of the trial.

Umar, in his lead ruling, exonerated Saraki of all the charges on, among other grounds, that failure of the prosecution to obtain Saraki’s statement and make it part of the proof of evidence was fatal to the case.

He agreed with the defence team led by Chief Kanu Agabi (SAN), that the prosecution’s evidence had been manifestly discredited during cross-examination by the defence.

He added that the evidence adduced by the prosecution led by Mr. Rotimi Jacobs (SAN) was “so unreliable that no reasonable tribunal could convict” based on it.

The tribunal chairman specifically noted that the third prosecution witness, Mr. Samuel Madojemu, who is Head, Intelligence Unit of the CCB, only gave hearsay evidence on the information the witness purportedly received from the EFCC.

Umar also noted that the evidence of the first prosecution witness, Mr. Michael Wetkas, an operative of the EFCC, was unreliable.

Concerning the evidence of second prosecution witness, Mr. Amazi Nwachuckwu, Head of Funds Transfer Unit of the Guaranty Trust Bank, Umar noted that witness had testified that documents relating to alleged foreign transfers by Saraki had been consumed in a fire incident so there was nothing to prove the charges that were based on the documents.

The tribunal chairman also noted none of the four witnesses, including Mr. Bayo Dauda, an official of Guaranty Trust Bank Plc, Ilorin branch in Kwara State, who testified as the fourth witness, gave evidence that could prove any of the ingredients of the alleged offences.

The charges instituted against Saraki before the CCT related to the alleged breaches of the code of conduct for public officers, acts which were said to be punishable under the Constitution and the CCB/CCT Act.

He allegedly committed the breaches by making false declaration of his assets while being governor of Kwara State between 2003 and 2007 for his first term and between 2007 and 2011 for his second term as governor and from 2011 to 2015 as senator.

Among the breaches were that he obtained N375m loan from Guaranty Trust Bank Plc in 2010, converted it to £1,515,194.53 and transferred to United Kingdom for full and final mortgage payment for a London property.

The prosecution accused him of abuse of office by paying back the loan with funds belonging to Kwara State Government.

Additional charges against him included allegation that he continued to receive salary and emoluments as Governor of Kwara State after the expiration of his tenure and at the same time, from the Federal Government as a senator between June 2011 and October 2013.

He was also said to have failed to declare to the Code of Conduct Bureau on assumption of office as governor of Kwara State in 2003, his leasehold interest in the property at 42, Remi Fani Kayode Street, Ikeja, Lagos.

The charges also included allegation that Saraki failed to make a written declaration of his “properties and assets”, that is, N77m made into his account with Guaranty Trust Bank, GRA, Ilorin branch on September 5, 2007.

The prosecution alleged that the sum of N77m was not fairly attributable to his “income, gifts or loan approved by the Code of Conduct for Public Officers”.

The prosecution also alleged that while being a public officer, he operated bank accounts outside Nigeria, and failed to declare the foreign accounts to the CCB while being governor and a senator during the period.