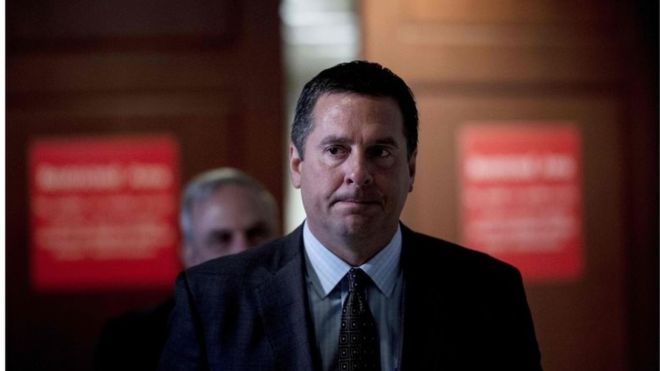 The FBI has publicly challenged a push by Republican lawmakers to release a controversial memo which purports to show anti-Trump bias at the agency.

“We have grave concerns about the material omissions of fact that fundamentally impact the memo’s accuracy,” the FBI said in a statement.

A top Trump aide said on Wednesday they would release the top secret document “pretty quick”, despite the objections.

Democrats claim the memo is an attempt to discredit the FBI-led Russia probe.

“It will be released here pretty quick, I think, and the whole world can see it,” White House chief of staff John Kelly said during an interview with Fox News Radio on Wednesday morning.

Hours later, the FBI issued a rare statement saying that it had had “limited opportunity” to review the document before the House Intelligence committee voted to release it on Monday.

“We are committed to working with the appropriate oversight entities to ensure the continuing integrity of the FISA (Foreign Intelligence Surveillance Act) process,” the FBI statement added.

What is the memo?

The four-page memo, which was compiled by staffers for the House Intelligence Committee Chairman Devin Nunes, claims that the Department of Justice abused the surveillance programme known as FISA to unfairly target a member of the Trump campaign.

According to lawmakers who have reviewed it, the document purports to show that the agency obtained a warrant to spy on a Trump campaign aide after submitting as evidence the unproven “Russian dossier”.

That dossier was compiled by former British intelligence agent Christopher Steele with money financed in part from the Hillary Clinton campaign.

The committee voted to release the memo earlier this week, and Mr Trump has until the weekend to decide whether to de-classify the information for public release.

Mr Trump was heard following his State of the Union speech on Tuesday night telling a Republican lawmaker that he is “100%” for releasing the document, but on Wednesday White House spokeswoman Sarah Sanders told CNN “there’s always a chance” that it will not be released.

But Mr Kelly was less equivocal, telling Fox News on Wednesday morning that Mr Trump “wants everything out so the American people can make up their own minds and if there’s people to be held accountable, then so be it”.

Why is it controversial?

Before the FBI statement on Wednesday, the Department of Justice had already said it would be “extraordinary reckless” to release the document.

Democrats, whose efforts to release a competing memo were blocked by the committee, claim that Mr Nunes cherry-picked highly classified information that they say could jeopardise national security.

They argue the memo is an effort to embarrass the FBI and discredit the investigation, led by special counsel Robert Mueller, into alleged Russian meddling and possible obstruction of justice by members of the Trump administration.

But Trump officials say the memo proves his claim that he has been treated unfairly by the FBI.

After firing FBI director James Comey, Mr Trump reportedly asked his temporary replacement Andrew McCabe how he had voted in the 2016 presidential election.

Mr McCabe, who briefly served as acting agency director, resigned amid public accusations of Democratic bias from Mr Trump. He was planning to retire in March.

What is the latest reaction?

Chairman Nunes, who served on the Trump team during his White House transition, said on Wednesday it was “no surprise” that the FBI has objected to the memo’s release.

“Having stonewalled Congress’ demands for information for nearly a year, it’s no surprise to see the FBI and DoJ issue spurious objections to allowing the American people to see information related to surveillance abuses at these agencies,” he said.

A top Democrat on the House committee, Adam Schiff, said that releasing the memo “increases the risk of a constitutional crisis by setting the stage for subsequent actions by the White House to fire [Special Counsel Robert] Mueller or, as now seems more likely, Deputy Attorney General Rod J Rosenstein”.

Democratic Senator Dianne Feinstein, who serves on the Senate Intelligence committee, said that the Republicans are clearly trying to “undermine the special counsel’s investigation”.