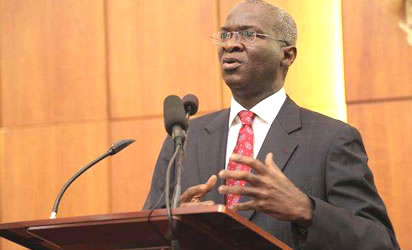 —As FG pledges to provide accurate demarcation of border lines

The minister of Works, housing and power, Babatunde Fashola has tasked professionals in the construction sector of the nation’s economy to strive and get international certification in order to be globally compive.

Fashola, who gave the charge in Abuja while declaring open the 7th Building and Construction Economic Roundtable BCERT 7, said the administration was determined to encourage professionals to take centre stage globally.
The event organised by the Quantity Surveyors Registration Board of Nigeria, QSRBN, had “Global Competitiveness of Nigeria’s Quantity Surveying in Driving National Development” as theme.
The minister, who was represented by Director, Quantity Surveying in the ministry, Dickson Onoja, noted that globalisation had enhanced mobility of labour, stressing that the administration was committed to ensuring that Nigerians got value for money in the sector.

In his remarks, President of QSRBN, Mallam Murtala Aliyu lamented that corruption had affected the nation’s economy with so much unearned incomes giving rise to low productivity. He described construction as a strategic sector to reflate any economy in recession as it is the case in Nigeria today.

“The capacity of the building and construction sector to generate employment on a massive scale, its multiplier effect in the overall economy and more importantly, its vital contribution to the country’s fixed capital formation and investment marks it out as an important sector,” Aliyu stated.

QSRBN President however, outlined that the global competitiveness of Nigeria’s quantity surveying will give due consideration to components of quality infrastructure such as standardisation; methodology, conformity assessment, certification and accreditation.

According to him, “Implicit in a globally competitive economy is the availability of massive employment opportunities especially for our youths and our very active population. It is our belief that no country can achieve sustainable economic growth and development without having its teeming youths employed and engaged in viable economic activities”, Aliyu stated.

Meanwhile, Surveyor-General of the Federation, Ebisintei Awudu, has assured Nigerians of the agency’s determination to contribute to sustainable national development through application of accurate demarcation of the border lines within and around the country.

Surv. Awudu, who stated this at the joint sensitization/enlightenment campaign of border communities of Itu/Odukpani local government areas of Akwa Ibom and Cross River States respectively, held at the bridge head linking the two regions, reiterated the commitment of the agency to provide technical and logistics to ensure boundary pillars are placed without bias.

He explained that the placement of pillars on ground to demarcate communities and states will enable government at all levels to know their limits so as to plan adequately for their areas of jurisdiction, adding that the place of unbiased boundary demarcation cannot be over-emphasized in ensuring informed decision making by the government.

Awudu also commended the Federal Government for this bold initiative, which has culminated in the flag off of the sensitization exercise, the first of its kind in the South-South geopolitical zone, stating that the Office on its part will provide all the technical logistics to ensure that the boundary pillars are placed without bias at the specific places soon.

Ebisintei, while commending the two states for their roles in ensuring the realization of the project, urged them to continue to keep up faith with the Federal Government so as the long awaited peace can be maintained in the communities.

Also speaking, the Director-General, National Boundary Commission NBC, Dr. Mohammed Ahmad stated that the basic problems of most of the nations in Africa are territory-associated, adding that it was better to dialogue than fight, calling therefore on governments of both states to key into the Federal Government’s initiative by making conscious effort in ensuring that their subjects live peacefully to forestall further loss of lives and properties in the area.