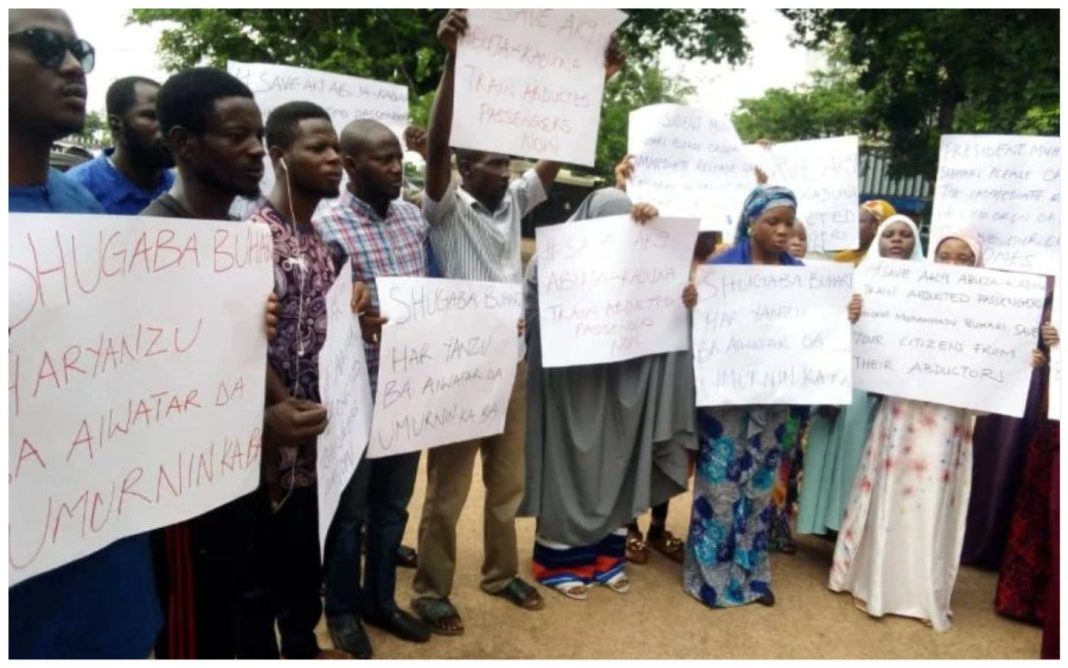 The relatives and friends of the remaining 50 abducted Abuja-Kaduna train passengers held a peaceful street protest in Kaduna to demand the immediate rescue of their loved ones held in captivity for 100days.

The protesters, who hit the street at 7:30 am, stormed the Nagwamatse House located along the busy Ali Akilu Road, Kaduna.

Hundreds of families and friends of the victims carried placards with different inscriptions to demand the release of their loved ones.

The protest leader, Dr Abdulfatai Jimoh, begged the Federal Government to do everything humanly possible to rescue their loved ones without delay

According to him, “today is exactly 100 days since our loved ones were abducted. It was meant to be a journey of two hours; however, it turned out to be 100 harrowing days. Since then things have not been the same with us.”

He said they have been appealing to the government in the last 100 days to rescue their loved ones, but so far they have not seen much, expressing appointment.

He said they are appealing again to the government to do all that is necessary to bring out their loved ones in the shortest time possible.

“If you remember, our loved ones spent their Easter in the bush, the Eid el-Fitr in the bush, and we are just three days away from Eid Kabir; we are praying they will spend the Eid Kabir with us,” he said

DAILY POST recalls that 63 Kaduna-Abuja train passengers were kidnapped on March 28, 2022, after wounding 26, and killing 16 others.

However, one was released based on the age and spirit of Sallah.

A few months after, six females and five males were also released after many negotiations with the federal government.

However, as bandits waited for implementation of their negotiations with the federal government, but to no avail, one of the victims was shot to serve as a warning, and for the Federal Government to hasten the implementation of their demands, among which was to release some of their comrades in various detention centres across the country.

A negotiator, who is also the Publisher of Desert Herald newspapers based in Kaduna, Mamu raised alarm over the safety of the victims who were reportedly bitten by snakes and other reptiles in the forest.

Videos of the cries of the victims surfaced on social media severally.
The bandits attacked Kuje prison, one of the facilities allegedly holding suspected bandits.