False Prophecy: Chief banishes prophet after his prophecy failed to come to pass 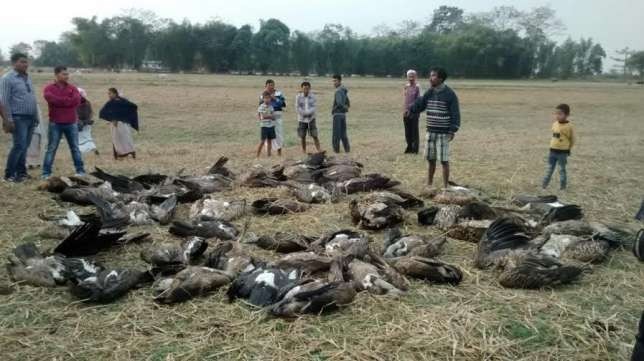 Head pastor of Devine Faith Prayer Ministry, Prophet Emmanuel Osei whose church hitherto was located in Bechem in the Brong Ahafo region has relocated to Kumasi in the Ashanti region following his banishment by the chief of the town, Nana Ofosu Gyeabour Akoto II.

Prophet Emmanuel Osei was accused of deliberately placing dead doves, crows and vultures with red bands around their necks at the main junction of the Bechem town to make people believe that his earlier prophecy claiming that witches would be holding a meeting in the town has come to pass.

It would be recalled that the man of God had said that the said meeting by witches who would appear in the form of bird was going to happen, but he would kill them.

When on Wednesday, May 9 the dead birds were found in the area, the youth reportedly petitioned the chief who then summoned the man of God for questioning.

Chief banishes prophet after his prophecy failed to come to pass

Adomonline.com reported Nana Ofosu Gyeabour Akoto II as saying Prophet Emmanuel Osei had admitted to intentionally throwing the dead birds at the said location to create a false impression that the witches had attempted the scheduled meeting, but he overpowered them.

The chief said he and his elders have banished the prophet from the town for causing fear and panic as well as bringing the name of the Bechem town into disrepute.

Nana Ofosu Gyeabour Akoto II further said that the prophet was also fined to pay 12 goats, an undisclosed amount of money and one box of schnapps to pacify the gods of the land.

He then delegated people to go and ensure that Prophet Emmanuel Osei moved out of the jurisdiction.

Chief banishes prophet after his prophecy failed to come to pass

However, speaking to local media, the prophet denied having admitted to the offence for which he was banished.

He is suspicious that a fellow man of God in the town had orchestrated the entire scheme just to destroy him.

Prophet Emmanuel Osei said: “I’m not surprised they are blaming me for this incident. It is true I prophesied about the incident but I did not put the birds there.  I know one pastor in this town is behind this.”

As to why he paid the fine slapped on him if he did not commit the said offence, the man of God said: “I did that out of respect for the chief of Bechem but for what they have done, anyone who spends that money will be cursed.”

He alleged that: “The youth stormed my church, assaulted by pastors, destroyed my instrument, chairs and stole my offering.  I have moved to Kumasi to save my life.”