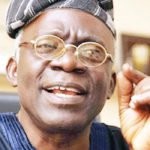 Rights activist and constitutional lawyer Femi Falana (SAN) said yesterday that the leader of the northern youth group that issued a three months ultimatum to the Igbo to vacate the North does not live in the North, but in Lagos.

Falana however said the restructuring and true federalism must be resolved now for Nigeria to make progress. He spoke at a news conference organised by organised labour in Abuja.

To Falana, it is laughable that certain individuals will sit down in the comfort of their homes to issue ultimatum to others to vacate their land.

He said: “The founding fathers of our country opted for federalism. Ours is not the only federation in the world. The United States that we copy almost recklessly is a federation of over 50 states. If you look at the motto of the United States, it is out of many, one nation has emerged.

“In the recently concluded elections in the United Kingdom, seven Nigerians emerged as legislators. Can we look at this challenge before us and stop fanning those things that can divide us. Information is very crucial to all of us and I want to say this publicly.

“When those students were killed by the police, he came out and said only four students were killed. That angered Nigerians, particularly Nigerian students, and there were protests. One of the universities where that protest was very successful was the University of Nigeria, Nsukka.

“The man who led that protest was the late Chima Ubani. The state did not like that there was a national protest against the killing of students. The government did not arrest people in the North; they did not arrest students who were demonstrating in the West.

“The Babangida regime went for Chima Ubani and arraigned him and eight of his colleagues under a military decree that required that they be sentenced to death. I left Lagos and went to Enugu to defend those young men and we got them freed. When they returned to campus, the Vice Chancellor expelled them. Again, I went to court and got them freed.

“This story is important because a Hausa Vice Chancellor invited police and they killed four young Hausa people. Nigerian students protested and an Igbo young man led that protest in the East against injustice. There are lawyers in the east, but a Yoruba lawyer from from the west went to free them.

“So, we must look at those things that tie us together and not those ones that the ruling class are using to divide our people. Poverty is the same all over the country; injustice is injustice all over. So, there is no nation without challenges and there is no nation without problems. It is the ability of a nation to rise to the challenge that matters.

“How can a serious nation be giving oil blocks to individuals when states are broke. You are not giving these oil blocks to states. States are not buying electricity companies. We have just been informed that what is owed to pensioners who have served our fatherland is N300 billion. Just this week, the Federal Government released N701 billion to those who bought our electricity companies. Initially, they were given N300 billion. That is over one trillion naira to manage darkness in our country. So, please, let us begin to ask relevant questions.

“On the national conference, don’t be carried away because power is not given without a fight. Those who want implementation of the recommendations of the conference should be prepared for a struggle with Labour and with progressive extraction of the civil society.

“You can’t be going to Abuja every month to take money and yet, you are talking of true federalism. True federalism means you must produce what you need in your area and then, we can ask everybody to pay tax.”

Falana went on: “There are two laws that have made education free and compulsory from primary t junior secondary school. The Child Rights Act and the Universal Basic Education Act. If we make those laws implementable, we are not going to have children who are hawking good on the street and many of the young people that are being recruited into terrorist groups and the rest of them.

“We must also insist in the National Health Act that provides that one percent of the national budget shall go towards servicing health. We only talk of the budget of the Federal Government whereas the money that goes out of the federation account is shared into three.