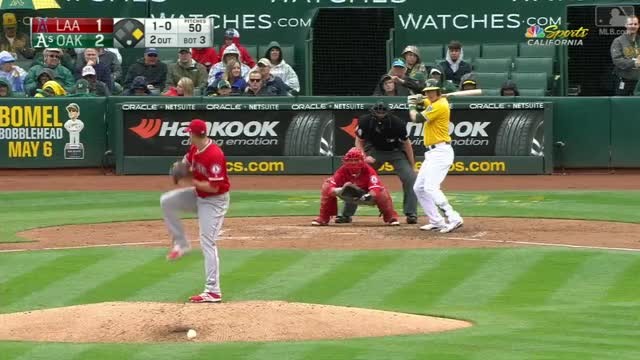 The Eyeball Scout is working at a slight disadvantage, having spent the last road trip on a road trip of his own, only able to follow the A’s on radio. So it was only the Eyeball Scout’s trusty sidekick, The Earball Scout, who caught Jaycob Brugman’s first few games and Daniel Gossett’s major league debut in Miami.

However, the Eyeball Scout is never daunted by the trivialities of Tiny Sample Theatre. It’s a more intimate venue and you can’t beat the low prices. (I’ll send you the bill.) So here are few observations and analyses at the cost of just your time!

Clearly, Daniel Gossett’s second start went better than his first and the Eyeball Scout found much to praise in last night’s effort — as well as a few concerns.

Where I thought Gossett excelled was in his assortment of off speed pitches, which included an effective curve, what I assume was his cutter, a pitch that had more downward action than lateral movement and reminded me a bit of the Michael Wuertz “splitter-like slider,” and a decent changeup. Gossett’s fastball velocity was also improved from his first start.

Another aspect I liked was that I had difficulty eyeballing what pitch was what because the movement and velocity seemed to vary. That’s actually a good thing, because it means batters cannot time or get used to a certain pitch acting a certain way. I don’t know that Gossett is another Sonny Gray, inventing new pitches and wrinkles on old pitches on the fly, but some variety within a pitch — whether it’s adding and subtracting, or just a slightly different finish to a pitch, is a good thing.

The final positive note is that Gossett appeared to me to have a good feel for pitching, not just in adding and subtracting but also in setting up and putting away hitters (except Jake Marisnick, grrr…) in a way that belied his lack of experience.

There is, however, a cautionary tale to last night’s excellent start. Gossett left an awful lot of curves, cutters, and changeups up in the zone, mostly getting away with them when they were taken, fouled off, or a couple times backed up and jammed batters. My guess is that Gossett left the same number of pitches up in Miami and just didn’t get away with them, because he really did get away with a lot of pitches left up last night.

Gossett is not a “stuff” guy and while his fastball is much better than those of Tommy Milone and Dillon Overton, he shares the quality that he can’t afford to make a lot of mistakes. If his fastball sits around 92MPH, he will have a lot more margin for error but his margin is still going to pale to that of a Sean Manaea, or even a Frankie Montas or Jharel Cotton — and we’ve seen how often and how far their mistakes can fly.

Overall, Gossett looked to me like he has a future as maybe a #4 SP, someone who can give you 6-7 IP, keep you in the game, and keep his ERA around 4.00, but whose upside may be limited to being a solid member in the back of the rotation. That’s not a bad thing, and it’s what the A’s hope another Daniel, Mr. Mengden, can be. Gossett, so far, has a chance to prove to be the “better Daniel”.

I have to say I have really liked Jaycob Brugman’s defense in CF. His first step, the angle he takes to the ball, his routes, and his consistency, all remind me of Mark Kotsay, even if Brugman’s defensive ceiling in CF is lower. He made one mistake, getting too close to Aaron Judge’s one-hopper to the wall when he had no chance to catch it, allowing it to bounce back over his head for a triple instead of a routine double. That’s really the only mistake I’ve seen, and otherwise Brugman has been extremely solid and reliable out there.

Brugman’s hitting? You can see the concerns, given that in 10 games Brugman still has yet to double, triple, or homer. He won’t make a big league career out of bouncing balls through the right side hole.

However, an apparent negative actually feels like a positive to the Eyeball Scout and that it that Brugman has swung and missed an awful lot of bad balls. Why is this good? It’s not good, but it’s also inconsistent with Brugman’s profile as a contact hitter who has a good eye and walks nearly as much as he strikes out.

So then why is Brugman chasing so many bad pitches? My guess is that it’s a combination of two factors that will naturally self correct. One is that Brugman is seeing nearly every pitcher for the very first time; the other is that he is probably a bit nervous and anxious in his first big league trial.

Once Brugman settles down and gains more familiarity with the league, hopefully his good eye and plate discipline will return and then we’ll see if he can drive the ball enough to make it in the show. I wonder if he can load up a bit in hitter’s counts and flash enough power to keep defenses honest, while hitting the ball hard enough to all fields to keep his batting average north of .250 and maybe slug north of .350. Getting in more hitter’s counts by laying off bad balls will help, and that’s in Brugman’s skill set throughout the minors.

Brugman actually reminds me a lot, in almost every way, of a former A’s player and that’s Ryan Sweeney. Sweeney didn’t have the speed of a CFer but used strong fundamentals and good routes to play an accomplished, if not spectacular CF. In RF, Sweeney was a plus defender thanks to having slightly less ground to cover and a good throwing arm. At the plate, Sweeney never flashed the power his build suggested he might but he drew walks and sprayed the ball to all fields. Ultimately, Sweeney was an ok starter but a very good 4th OFer who had a couple really good seasons in a somewhat undistinguished career.