Exclusive: Sister of Globacom staff killed by her “husband” in Bayelsa reveals she was three months pregnant 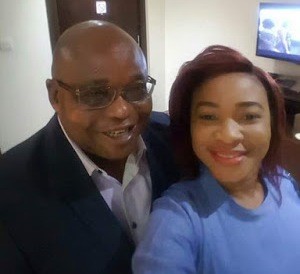 On Thursday, LIB shared the report of a 33-year-old staff of Globacom, Oyinye Faustina Eze, who was killed by her “husband” Stephen Ogho-Oghene Akpata, at their home in Kpansia area of Yenagoa, the Bayelsa state capital. The murder took place few weeks after their court wedding (Read here).

LIB reached out to the sister of the deceased, Clara Uche, who gave details of what transpired between the late Onyinye and her murderer. According to Mrs. Uche, Faustina and Stephen met in February this year when he came for his Sim card registration at their office. Faustina who was previously working at the Bonny Island branch of the company, was transferred to Yenogoa and so she had to relocate. When they met, he asked her out and she accepted his proposal.

The relationship was going smoothly until when he revealed his intention to marry her and take her to his base in Australia. He pressured her to resign from her work while he was reportedly working on her visa but Faustina refused because her sister whom she confides in, advised her not to resign from her work until she gets her visa. This did not go done well with Stephen who felt she was going against his will.

“He had been disturbing my sister to resign from Globacom and I was like why is he bent on you resigning. I told my sister that when the visa is ready, then you can resign your work. He wanted her to resign so that he can corner all her money and the benefits she would get when she resigns.

Sometime this year, she told him to follow her to see her people in Enugu so they can start off their wedding plans. Apparently not ready to tie the knot with her, feigned his kidnap. He called her on the phone few days to the day they were supposed to meet her family and informed her that he had been kidnapped by his daughter and her husband. When that day passed, he surfaced and apologised to her.

Stephen had always dodged her call for him to Enugu to see her parents for their introduction.

Early August, Faustina called her elder sister informing her that her fiance, Stephen, said they would be going for their court wedding on August 8th. Only one of her younger cousins was at the court wedding as her family members could not make it because the invitation was too sudden for them to travel down to her base. All this time, no member of her family had seen Stephen physically. So on August 8th, they went to the registry and got married legally.

Stephen continued to turn down her request for him to follow her to Enugu to see her people so they can begin their traditional marriage plans. This got Faustina worried so she traveled to Enugu to see her sister whom she bore her mind to and expressed all her fears. The sister advised her to back out of the marriage if she wasn’t certain about the man. Faustina also revealed to her sister that she was three months pregnant for the man. While she was in her sister’s house, Stephen called and even told the sister that Faustina was pregnant with his twins.

Faustina returned to Yenagoa and on August 15th, she told Stephen that she would walk out of their marriage if he doesn’t follow her to do their introduction. He asked her what becomes of their child and she lied to him that she had terminated the pregnancy. An argument ensued and in anger, Stephen picked up an iron and used it to hit her head. She collapsed and died. He fled from their home and ran to Lagos where he called his brother claiming he was kidnapped by some people and dropped off in Bayelsa. The elder brother of the suspect then called the sister of the deceased and they were able to track his phone to Badagry in Lagos state where he was arrested and then taken to Bayelsa state.

“On the day she was murdered, her phone rang, she didn’t pick it. My elder brother also called but she didn’t pick. At a stage, the phone was switched off. The man’s own was also switched off. On Wednesday, August 16th we were all panicking. We contacted her office and they told her she wasn’t at work and that they were also worried. We now gave them the go ahead to go to the police so they can go and check the house. When they got there, they found my sister dead. I went to Bayelsa with my brother to take the body. My sister had been getting threatening messages from the daughter of the man”.

Stephen initially denied knowledge of her murder but confessed after the family of the deceased told him they would not pursue the case against him.

Oyinye is the last child of her mother who is still alive and has been informed about the gruesome murder of her daughter.