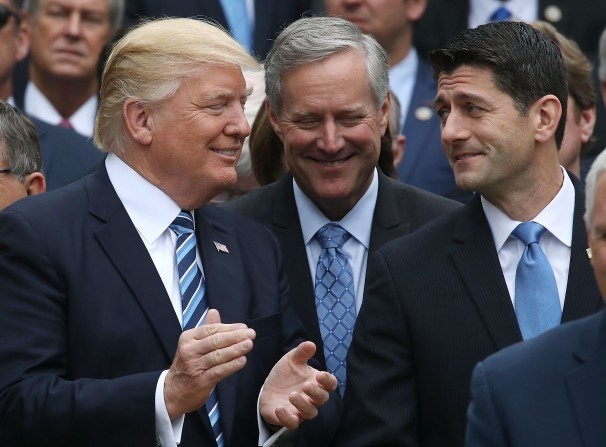 President Trump’s proposal to cut federal spending by more than $3.6 trillion over the next decade — including deep reductions for programs that help the poor — faced harsh criticism in Congress on Tuesday, where even many Republicans said the White House had gone too far.

While some fiscally conservative lawmakers, particularly in the House, found a lot to praise in Trump’s plan to balance the budget within 10 years, most Republicans flatly rejected the White House proposal. The divide sets up a clash between House conservatives and a growing number of Senate Republicans who would rather work with Democrats on a spending deal than entertain Trump’s deep cuts.

“This is kind of the game,” said Senate Majority Whip John Cornyn (R-Tex.). “We know that the president’s budget won’t pass as proposed.”

Instead, Cornyn said he believes conversations are already underway about how Republicans can negotiate with Democrats to avoid across-the-board spending cuts that are scheduled to go into effect in October. Those talks could include broad spending increases for domestic and military programs that break from Trump’s plan for deep cuts in education, housing, research and health care.

“I think that’s the only way,” Cornyn said of working with Democrats on spending. “It would be good to get that done so we can get the Appropriations Committee to get to work.”

What Trump’s budget cuts from the social safety net

“We’ll have to negotiate the top line with Senate Democrats, we know that,” McConnell told reporters Tuesday. “They will not be irrelevant in the process, and at some point, here in the near future, those discussions will begin.”

As Senate Republicans were discussing a bipartisan spending agreement, White House budget director Mick Mulvaney stood across town pitching Trump’s proposal to dramatically alter the role of government in society, shrinking the federal workforce, scaling back anti-poverty programs and cutting spending on things like disease research and job training. The $4.094 trillion proposal for fiscal 2018 includes $1 trillion in cuts over 10 years to anti-poverty programs including Medicaid, food assistance and health insurance for low-income children.

It would slightly increase spending on the military, immigration control and border security and provide an additional $200 billion for infrastructure projects over 10 years. It would also allocate $1.6 billion for the creation of a wall along the U.S. border with Mexico.

Budget experts questioned many of the economic assumptions that the White House put into its plan, saying it was preposterous to claim that massive tax cuts and spending reductions will lead to a surge in economic growth. The Committee for a Responsible Federal Budget, for example, said that using normal economic projections, the White House’s proposal would not eliminate the deficit and would allow U.S. debt to continue growing into the next decade.

“Rather than making unrealistic assumptions, the president must make the hard tax and spending choices needed to truly bring the national debt under control,” it said.

The White House proposals represent a defiant blueprint for a government realignment that closely follows proposals made in recent years by some of the most conservative members of the House, a group that once included Mulvaney himself. Trump has alleged that safety net programs create a welfare state that pull people out of the workforce, and his budget would cull these programs back.

Mulvaney pointed specifically to the Supplemental Nutrition Assistance Program (SNAP), the modern version of food stamps. The White House plans to propose forcing states to pay a portion of the benefits in the program, which reached more than 44 million beneficiaries in 2016.

“We are not kicking anybody off of any program who really needs it,” Mulvaney said. “We have plenty of money in this country to take care of the people who need help. . . . We don’t have enough money to take care of . . . everybody who doesn’t need help.”

Mulvaney, who served in the House from 2011 until earlier this year, is a co-founder of the House Freedom Caucus. Many of the provisions in Trump’s first budget reflect long-standing priorities of the Republican Party’s far right in cutting back federal spending to get the nation’s long-term fiscal picture under control — largely by cutting entitlement programs that mainly benefit the poor.

Republicans are keenly interested in passing a budget this year because they hope to use that legislation to lay the groundwork for a GOP-friendly rewrite of the tax code. Many GOP members hope to attach the tax reform to the budget process in order to advantage of special Senate rules that would allow both the budget and tax rewrite to pass with 51 votes, rather than the 60 that are needed to pass most other legislation. That special treatment could be critical to the success of the GOP tax effort in the Senate, where Republicans control a slim 52-to-48 majority.

White House officials knew their budget proposal would be jarring and launch a political fight, but they think it is a necessary debate given a wing of the Republican Party that wants the government to shrink.

But the cuts were met with intense criticism even among the majority of GOP members who hailed Trump’s desire to pare back spending, including many who worried about the size of some of the proposed cuts.

Rep. Mark Meadows (N.C.), chairman of the hard-line Freedom Caucus, said he was encouraged by early reports of new curbs on food stamps, family welfare and other spending. But he said he draws the line on cuts to Meals on Wheels, a charity that Mulvaney earlier this year suggested was ineffective.

“I’ve delivered meals to a lot of people that perhaps it’s their only hot meal of the day,” Meadows said. “And so I’m sure there’s going to be some give and take, but to throw out the entire budget just because you disagree with some of the principles would be inappropriate.”

Sen. Lindsey Graham (R-S.C.) said he backs Trump’s proposal for a temporary burst of new defense spending, which White House officials say would allow them to add 56,400 service members in 2018. But he worries that Trump would finance those increases by cutting critical programs like the National Institutes of Health.

“My number one goal is to have a more balanced budget,” said Graham, who also endorsed the idea of entering into spending talks with Democrats. “NIH is a national treasure, and it would be hurt, too.”

Graham is part of a long-standing alliance between defense hawks who want increased military spending and Democrats who are willing to back military programs in exchange for more spending on domestic priorities. The two sides have forged several past agreements, including a two-year plan for increased spending that is set to expire at the end of September.

Senate Minority Leader Charles E. Schumer (D-N.Y.) said that formal spending discussions have not yet begun but that he is prepared to work with GOP leaders when the time is right.

“The idea that we’ll work on a bipartisan budget independent from the president’s is ripe in the air,” Schumer said.

But such a deal is sure to anger conservatives in the House, where many of the most hard-line members staunchly defended aspects of Trump’s proposal.

Although Meadows said Meals on Wheels cuts might be “a bridge too far,” he praised much of the rest of the Trump budget. “It probably is the most conservative budget that we’ve had under Republican or Democrat administrations in decades,” he said.

Rep. Scott DesJarlais (Tenn.), a Freedom Caucus member, rejected the argument that Trump’s budget represented a betrayal of some of his populist campaign promises, notably to protect Medicaid spending.

“If we don’t do something to protect the program for the people who really need it, then they’re not going to have access to that, so I think we can’t continue to ignore these big-ticket items,” he said. “If we’re ever going to get our budget to balance and pay down our debt, we’re going to have to make these tough choices and have these tough votes.”