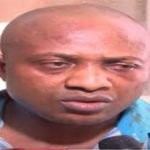 The police have urged Nigerians to not fret over the reported “vanishing” of suspected kidnap kingpin, Chukwudumeje George Onwuamadike alias Evans.
The appeal followed a report which alleged that Evans’ whereabouts was unknown and that the suspect had vanished.
According to the spokesman for the Force Headquarters, Jimoh Moshood, a Chief Superintendent of Police (CPS), Evans was safe and still in police custody.
Moshood said investigation was still ongoing, adding that the suspect would be charged to court as soon as all ends were tied.
He said: “The media need to avoid stories that could create fear, tension or misrepresentation among the masses. Where did Evans vanish to? That headline was misleading. The suspect and his accomplices are very much in our custody.
“We are working hard to ensure that justice is served at the end of the day. There are certain information that are not for public consumption to avoid jeopardising investigation or even national security.
“Evans is with the police. His whereabouts is known but cannot be made public. We are appealing to Nigerians to remain calm and support the police to conclude its investigation.”