Escaped prisoner back in police custody in Nova Scotia 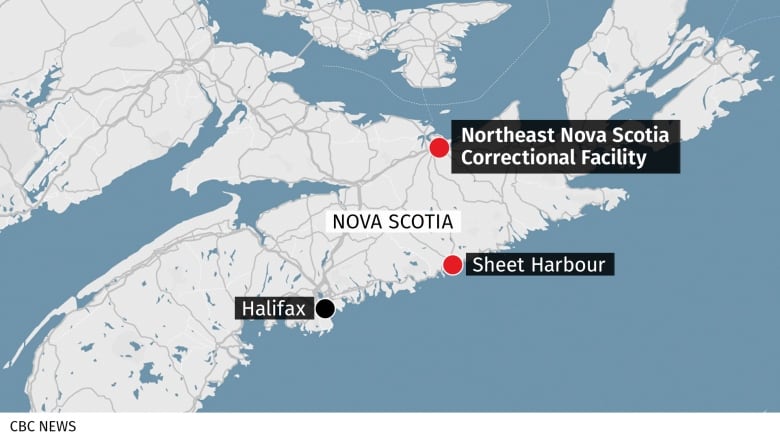 Police have recaptured the man who escaped from the Northeast Nova Scotia Correctional Facility in Pictou County.

Guysborough RCMP received a report of a suspicious campfire in a “remote” location just before  8:30 a.m. Saturday, Joyce said. A call came in a short time later about someone driving an ATV on a road near the fire.

A report of a stolen ATV in Guysborough County was also received, Joyce said.

He said the combination of all of those things, plus general information that Clarke-McNeil could be in Guysborough County, gave the RCMP “a good inkling” that he was the one involved in these incidents.

Joyce said police “closed the gap” on Clarke-McNeil by working alongside Halifax RCMP. After a short pursuit, he was arrested on the MacDonald Cove Road east of Sheet Harbour at about 9:45 a.m.

The area is about about 100 kilometres south of the jail.

The ATV went off the roadway at one point, Joyce said, but beyond that he had no details about how the arrest unfolded.

Clarke-McNeil suffered minor injuries in the incident including bruises and scrapes, Joyce said.

Since Joyce did not have details about when and how Clarke-McNeil was injured, he did not know if the case would be handed to the Serious Incident Response Team. The watchdog organization investigates all serious incidents which arise from the actions of police in Nova Scotia.

Many Nova Scotians received an emergency alert about the situation just before midnight on Friday. The alert included a description of Clarke-McNeil, his criminal charges, and asked people to call 911 if they saw him.

In a tweet Saturday, RCMP clarified the emergency alert was not issued by them, but instead on behalf of the Nova Scotia Department of Justice, which operates the correctional facility.

Police warned that Clarke-McNeil was incarcerated for serious criminal charges, including attempted murder, and should be considered dangerous.

RCMP took to Twitter to say the search for Clarke-McNeil continued overnight Friday with the help of police dogs as well as the New Glasgow Regional Police.

Just before 5:30 a.m. Saturday, RCMP tweeted the search was ongoing and that they had followed up on several tips during the night. All Nova Scotia police forces were notified.

In a news release, the department said Clarke-McNeil had been in custody at the provincial facility since December 2019.

Police urged people to stay away from the Coalburn and Priestville area in Pictou County on Friday after the escape.

According to the Justice Department, Clarke-McNeil is originally from Ontario and was on remand at the Northeast Nova Scotia Correctional Facility on several charges, including attempted murder, unlawful confinement, aggravated assault, assault with a weapon and resisting/obstructing a peace officer.

Clarke-McNeil is one of the 15 people charged in connection to a beating last December at the Central Nova Scotia Correctional Facility in the Burnside Industrial Park in Dartmouth.

A 46-year-old man suffered life-threatening injuries in that attack.

The head of the union representing correctional officers has said that up to five inmates attacked the man while as many as 30 prevented guards from helping the victim.

Correctional Services will conduct a full review of this escape, the Department of Justice said.