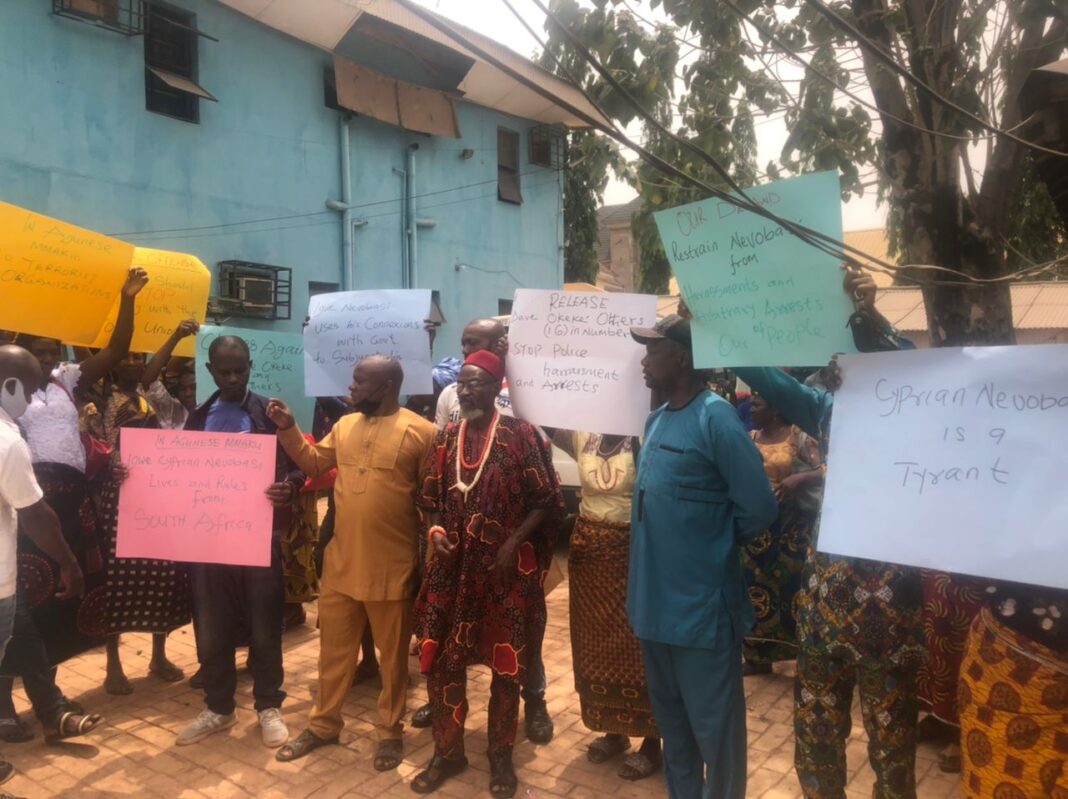 The indigenes of Agunese Mmaku Autonomous community, Awgu Local Government Area of Enugu State have asked the State Government to revoke the certificate of recognition issued to their Traditional Ruler, Igwe Cyprian Nevobasi.

They also demanded that the Staff of Office given to him should be collected, arguing that Igwe Nevobasi is not fit to occupy the office.

They made the demand on Thursday in Enugu when they staged a peaceful protest to register their grievances.

Speaking on behalf of the Community, Mr. Vincent Okafor said they were protesting the tyrannical leadership of the Igwe, as well as the unwarranted arrest and detention of one Mr. Dave Okeke under a trump-up charge.

”On 30th December 2021, our people schedule for an election of new executive members into our town Union because the tenure of the incumbent executive expired that day.

“We notified Enugu State commissioner for Local Government who supposed to observe the election, but they failed to attend.

“Unfortunately, Igwe Cyprian disrupted the process with the flimsy excuse that he got a call from the Commissioner instructing that election should not hold over the killing of someone in a similar exercise; which was false.

“But his primary reason for truncating the election is that he has seen he can no longer force his choice candidate on the people.

“He realized that we have through a 16-man committee requested the outgoing Town Union Executives to render a financial report, render the account of their stewardship; which up to this minute they have not done.

“Among the money squandered was the N5m given to communities by Governor Ifeanyi Ugwuanyi for community projects and up to this moment, no one has explained to Agnese Mmaku autonomous community what they used the money for.

“Not only that, there is much-unaccounted money that entered the community.

“For instance, Setraco paid the community for the site where they excavate sand for road construction. They paid Igwe and Town union, and we did not know how much they were paid or what they used the money to do up to date.

He asked the state government to dissolve the caretaker committee set up by the Traditional Ruler as he lacks the power to constitute such a committee and allow the community to elect their preferred leaders.

When contacted, the traditional ruler said that he does not want to join issues with anybody, adding that he remains the Igwe of the community and the people must respect that.