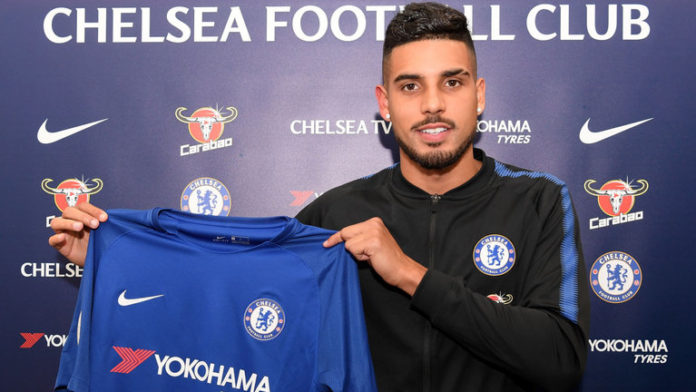 Chelsea have completed the signing of defender Emerson Palmieri from Roma.

Palmieri flew to the UK on Tuesday to undergo a medical at Chelsea’s Cobham training ground and signed a four-and-a-half-year-deal with the club.

Sky Sports News reported the clubs have agreed a deal of £17.6m plus £7m in add-ons for the left-back to move to Stamford Bridge.

The 23-year-old Brazilian – who switched his international allegiance to Italy – has been assigned the number 33 shirt at Chelsea.

He told Chelsea’s official website: “I came here because it’s a great team with a great history. Today I am realising one of my dreams to pull on the shirt of such a great club.

“English football is something I have been watching since I was 15 years old. It is a really beautiful game over here but it is going to be even more beautiful to play it.”

Palmieri began his career in his Brazil with Santos before joining Serie A side Palmero on loan in 2014 and Roma permanently the following season.

He is set to provide competition for Marcos Alonso in Conte’s squad following Baba Rahman’s loan move to Schalke.

Palmieri’s Roma team-mate Edin Dzeko will not be joining up with Antonio Conte because of the amount of money and length of contract being requested by the player, according to Sky sources.

The Bosnia international is asking for a three-and-half-year deal worth around £120,000 per week.

Chelsea, who were willing to pay a fee of up to £26m for the former Manchester City forward, are closely monitoring Olivier Giroud’s situation after Arsenal agreed a £60m deal for Pierre-Emerick Aubameyang.