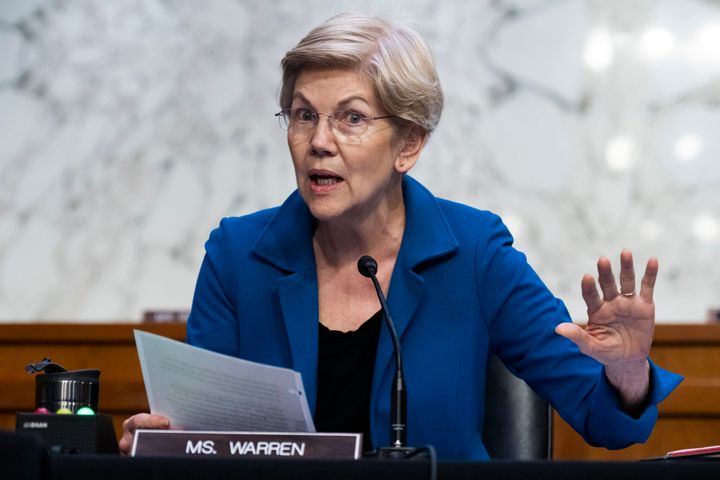 Sen. Elizabeth Warren (D) plans to reintroduce a bill on Thursday that would ban anti-union “right-to-work” laws that are now on the books in a majority of states.

Such laws forbid employers and unions from entering into agreements stipulating that every worker covered by the contract pay fees to the union. In doing so, they allow workers to opt-out of paying any dues while still enjoying the benefits of a union contract and representation.
Also read: A Complete Timeline Of Kim Kardashian And Pete Davidson’s Relationship

Warren and other Democrats have railed against the provisions for years, but that hasn’t stopped the laws from proliferating in Republican-led states hostile to organized labor. Twenty-seven states have now put right-to-work laws in place, with Kentucky being the most recent in 2017.

Warren said in a statement to HuffPost that Democrats were making clear they “stand in solidarity with workers everywhere.”

“Republicans and their corporate interest backers have imposed state laws with only one goal: destroy unions and discourage workers from organizing for higher wages, fair benefits, and safer working conditions,” she said.

The Massachusetts senator has rounded up 18 co-sponsors in her chamber ― all Democrats, plus the independent Sen. Bernie Sanders (Vt.) ― for what she’s calling the Nationwide Right to Unionize Act. She previously introduced similar versions of the bill in 2017 and 2020.

Rep. Brad Sherman (D-Calif.) has introduced a companion bill on the House side, where a dozen Democrats have co-sponsored it so far.

Despite Democrats currently holding threadbare majorities in the House and Senate, the odds of the legislation making it to President Joe Biden’s desk are slim to zero in the current Congress.

“Twenty-seven states have now put right-to-work laws in place, with Kentucky being the most recent.”

Even if Senate Democrats were willing to dispense with the filibuster that requires 60 votes to surmount, they could still struggle to get centrist colleagues in their caucus onboard with the plan. Two of those colleagues — Democratic Sens. Kyrsten Sinema and Mark Kelly — hail from the right-to-work state of Arizona and have a history of frustrating their party’s progressive wing.

Nonetheless, the right-to-work bill and other aggressive labor proposals like it can help unions gauge where Democrats stand on their priorities.

Unions have been fighting right-to-work measures on multiple fronts in recent years. In addition to the state laws that have been passed, the conservative majority of the Supreme Court ruled in 2018 that government workers could not be required to pay what is known as “fair share” fees to cover the cost of union representation. The decision, Janus v. AFSCME, effectively made the entire U.S. public sector right to work.

Missouri nearly became the latest state to implement such a law, but after the GOP-led state legislature passed one in 2017, voters promptly overturned it the following year by referendum.

Democrats have included a ban on right-to-work laws in their massive proposal to overhaul labor law known as the Protecting the Right to Organize Act. The bill would also significantly ramp up penalties against employers for illegal union-busting and make it easier for workers to secure a first collective bargaining agreement, among other significant legal changes.

Like Warren’s standalone proposal to unwind the right-to-work regime, the PRO Act faces an obstacle in the Senate filibuster. Progressives had hoped to include some measures of the PRO Act in their big party-line package that was passed in August, but none made it into the final law.

Also read: Progressives Are Starting To Freak Out About Dan Goldman In New York’s 10th District

Biden, who has fashioned himself the “most pro-union president” in history, has endorsed the PRO Act as well as the repeal of right-to-work laws.

“We should change the federal law [so] that there is no right-to-work allowed anywhere in the country,” Biden told a Teamsters conference in 2020. “For real. Not a joke.”