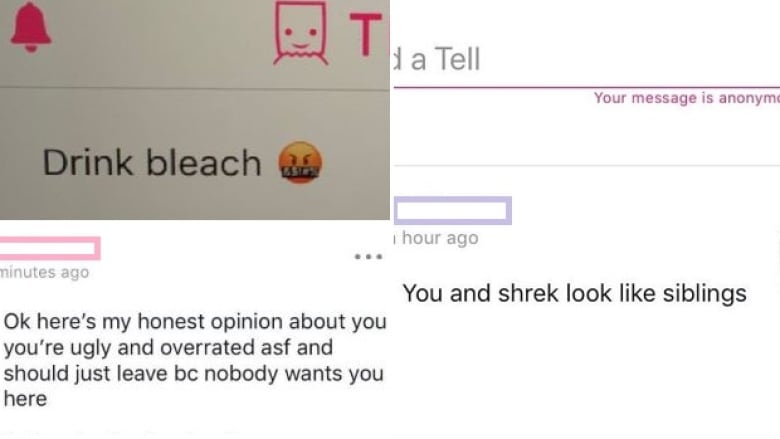 Natalie Boll told CBC News her daughter is no longer at the school.

“She went from this little girl who loves Harry Potter and who’s kind of quirky to absolutely broken and lost,” said Boll.

In a statement, Ena Harrop, head of Crofton House, said the school “does not agree with the characterizations of the events as portrayed in the lawsuit and will provide a robust legal defence of the allegations.”

The documents filed in B.C. Supreme Court allege a student at the school — identified as the “Crofton Student” — started making disparaging and racist remarks to the daughter when the girls were both in Grade 6, telling her things like she should get plastic surgery to look more white.

According to the claim, the Crofton Student had gained direct admission to the school without having to write the entrance exam and often bragged that her mother was friends with the school’s board of directors and attended exclusive donor events reserved for “rich” families.

The claim says the Crofton Student’s bullying escalated the next school year with the spreading of malicious gossip about the daughter, to the point that “a great proportion of the Grade 7 class became involved in propagating disparaging rumours…”

“In addition to racist remarks about [the daughter’s] mixed race heritage, Crofton House students spread homophobic rumours and hateful gossip about [her] sexuality,” reads the claim. “Crofton House did not intervene sufficiently, or at all, to cease the spiraling racism, bullying and homophobia…”

According the claim, Natalie Boll approached the school a number of times to express concern about her daughter’s treatment. One one occasion, a director allegedly said that her daughter was socially awkward and was, herself, to blame for the bullying and alienation she was experiencing at Crofton House.

In January 2019, abusive social media posts against the daughter began escalating with messages like “everyone at Crofton hates you,” “kill yourself” and “drink bleach,” according to the claim.

Some of the messages were sent on the app Tellonym, which was linked to the girl’s Instagram account. Tellonym is free to download and allows people to send anonymous messages to and about other people.

The claim says when the daughter started Grade 8 in September 2019, “the bullying continued frequently and unabated …  [The daughter] was being jeered at and called a ‘skid’ and a ‘lesbian,’ as she walked down the hallways.”

A Crofton adviser suggested that the daughter join extracurricular groups such as the debate club to fit in, according to the claim.

Around Sept. 30, 2019, an older student gave the daughter Xanax, advising it would help her not care about the bullying. The daughter passed out at school and was taken to UBC emergency where doctors administered Narcan. While there, previously undiscovered cut marks were found on her arms from where she had been cutting herself, according to the claim.

The daughter was put on suicide watch and sent to Children’s Hospital where a doctor advised that she not return to Crofton House.

The claim says that Crofton House “incubated an environment in which homophobia, racism, harassment, bullying and the recruitment of others to bully was commonplace.”

It says the school was negligent in maintaining sufficient student safety, “… resulting in the endangerment of [the daughter’s] life.”

None of the allegations have been tested in court.

Last week and completely separate from the lawsuit, Natalie Boll started an online petition calling for the banning of anonymous apps Tellonym and YOLO.

She said her daughter was bullied and harassed over both platforms and believes the apps are a breeding ground for hate and encouraging self harm and suicide.

Both are free to download from the Apple App Store and Google Play.

Sarahah, a hugely popular social media app that allows anonymous messaging, was dropped by Apple and Google after an Australian mother started a petition against it, alleging it facilitated cyberbullying and self harm.