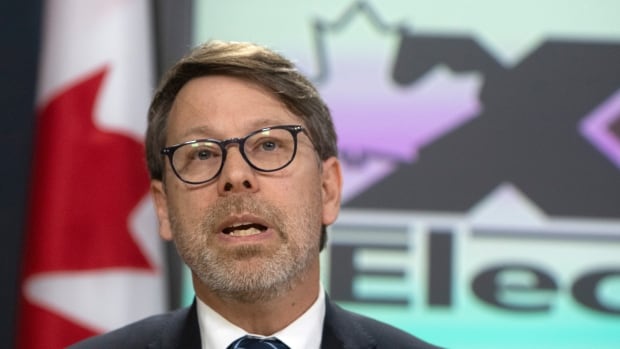 Canada’s Chief Electoral Officer Stephane Perrault is telling Canadians how the pandemic is changing the way his agency approaches the federal election.

Perrault will be speaking at 2 p.m. ET today. CBC.ca will be streaming the event live.

Earlier this month, Perrault warned Canadians that they might find themselves voting in unusual places or having to go a bit further afield to cast their ballots — part of changes the agency is implementing to ensure voting is conducted safely.

According to Elections Canada, up to five million Canadians are expected to vote by mail this time. Roughly 50,000 voters cast ballots by mail in 2019.

Perrault told the Canadian Press earlier this month that mail-in ballots will not be counted until the day after the election — to allow officials to receive them right up to the moment before polls close and to give election officials time to ensure no one voted twice.

In a worst-case scenario, he said, it might take two to five days to complete the mail-in ballot count.

That could mean the results of close races in some ridings won’t be known immediately.

The names of those issued mail-in ballots will be marked on voting lists as having already voted. Individuals who don’t receive their mail-in ballot by voting day may swear an oath to that effect and still vote in person. Mail-in ballots sent by anyone found to have voted in person will not be counted.

Chief Public Health Officer Dr. Theresa Tam said earlier this month that voting in a pandemic climate can be done safely, although she didn’t comment on the risks involved in parties conducting cross-country campaigns.