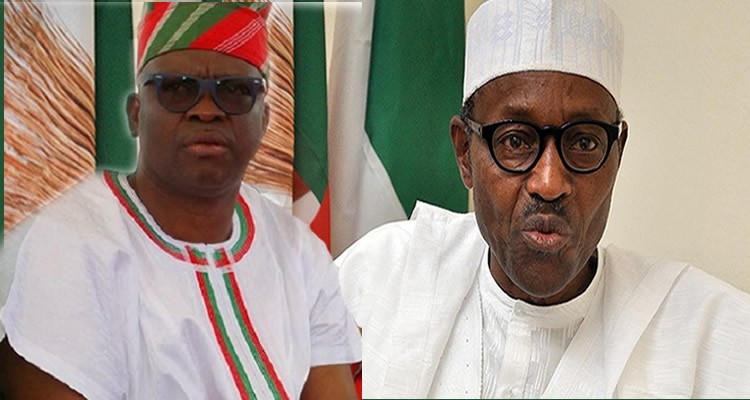 Kamarudeen Ogundele, Ado Ekiti
The Ekiti State Governor, Ayodele Fayose, has accused President Muhammadu Buhari of running a government of terror so as to cow the opposition.
Specifically, he accused the president of going after Igbo leaders in the opposition by desperately scheming to silent them through repeated harassment and intimidation.
The governor said the presidency in the efforts had turned the hitherto disciplined law enforcement agencies like the police and Department of State Services to agents of darkness that must muzzle the opposition at all cost.
He said this in reaction to the reported raiding of the home of the Deputy Senate President, Ike Ekweremadu, by security agencies.
Fayose said, “This is a calculated and sustained attempts to silent all the Igbo leaders that are not in the All Progressives Congress with Buhari ahead of the 2019 general elections because he knows it is a no go area for his party.
“They have gone from the leader of the Indigenous People of Biafra, Nnamdi Kalu, to the Chairman of Capital Oil, Ifeanyi Ubah and now the Deputy Senate President, Ike Ekweremadu. This is the muzzling of democracy and it is time we saved our nation beyond party line from the hands of the terrorists.
“Obviously it is too early to rate this government that has turned to government of terror using DSS and police as agents of terror. This certainly is not the change we bargained for.
“We have lost this democracy to military junta of the past masquerading as democrats and we must rise as a people to defend it.
“But I assure Nigerians that this period shall pass. Nigeria will once again be free from the hands of the agents of darkness and terror.”
Also speaking on the development, a former Minister of Aviation, Femi Fani-Kayode, who said he had confirmed from Ekweremadu that his home was raided by security forces, added that the action was “shameful and shocking.”
In a statement he issued on the incident, Fani-Kayode said, “Raiding the homes of our friends and leaders like Ekweremadu and harassing their children will not deter, stop or silence those of us that are in the opposition. It will only harden our hearts and strengthen our resolve.
“As each day goes by more and more people have come to accept the fact that the Buhari administration is a government of fascists and beasts.
“They are led and guided by dark and sinister forces whose sole agenda is to divide our people and destroy our country.
“It is about time that Nigerians woke up and stood up to their madness and tyranny. We must employ all lawful means to resist them and expose them for what they are. Not only are they incompetent but they are also sadistic and wicked.”
Share
Facebook
Twitter
WhatsApp
Pinterest
Linkedin
ReddIt
Email
Print
Tumblr
Telegram
Mix
VK
Digg
LINE
Viber
Naver
Previous articleBen Stiller and Christine Taylor Separate After 17 Years of Marriage
Next article‘Man Weaves’ Offer Cover For Balding Men, Cash For Black Hair Care Industry