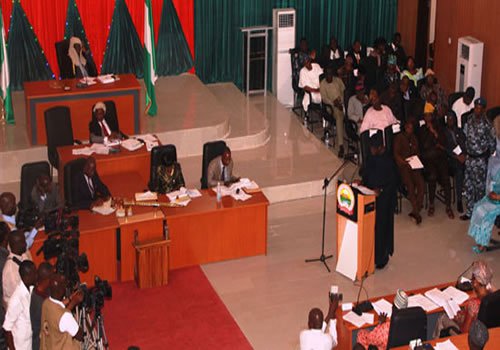 The Ekiti State House of Assembly on Tuesday lifted the suspension placed on two out of 12 of its members suspended in October 2018.

The News Agency of Nigeria reports that the lawmakers were reinstated at Tuesday’s plenary presided over by the Speaker, Mr Adeniran Lagbada.

The reinstatement followed the unanimous adoption of the report of the ad-hoc committee submitted by its Chairman, Mr Sunday Akinniyi.

The Speaker commended the committee for its speedy action and charged the two lawmakers to partner with their colleagues in moving the state forward.

The Chairman of the ad-hoc committee had earlier said the suspended lawmakers demonstrated humility and modesty in their conduct while under suspension.

Akinniyi said “the committee discovered that the duo never acted contrary to the restraint order placed on them.”

NAN reports that 12 members of the assembly were suspended over their alleged involvement in the passage of a N10 billion supplementary budget toward the end of the tenure of the Ayo Fayose administration.

Other legislative activities at Tuesday’s plenary included the passage of the bill on Ekiti Sustainable Development Goals and the commitment of the State Property Protection ( Anti- Land Grabbing) Bill to the House Committee on Lands and Housing for further scrutiny.