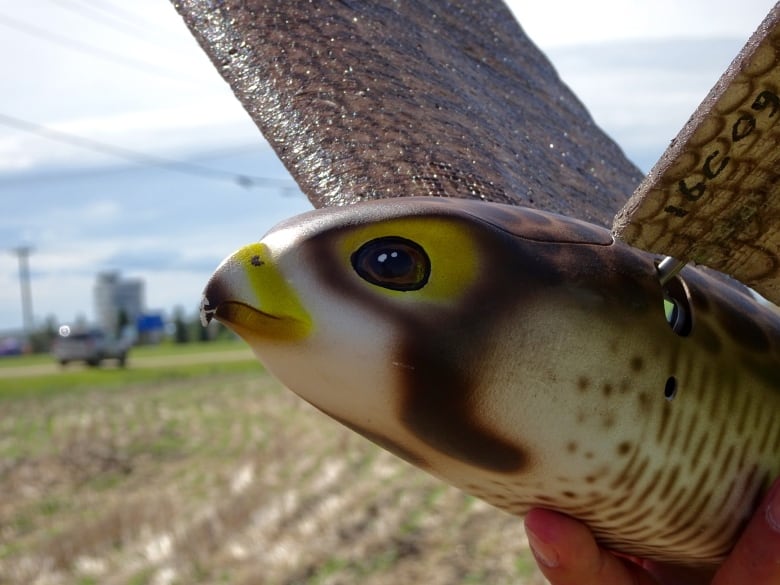 An Alberta-based drone company is hoping to take a project keeping birds off of tailings ponds in the oilsands to the next level.

Aerium Analytics was awarded $1 million in funding last month to collaborate with the University of Alberta to create an autonomous drone to scare off the birds.

The current version of the drone, used in the oilsands since 2019, requires a pilot.

The drone mimics a peregrine falcon, “the most world-renowned and feared aerial predators,” according to president and CEO Jordan Cicoria.

We’ll talk about how a drone that looks like a falcon is protecting wildlife in the oilsands. 6:16

“It actually flaps its wings,” he told CBC’s Edmonton AM on Friday. “It doesn’t have any propellers, so we’re really using it for biomimicry and tying into that fight-or-flight response.”

The robotic bird, or Robird, keeps the birds from landing, intercepting them “before they get too close to even want to consider landing,” Cicoria said.

The next step is to move to a semi-autonomous version with a pilot operating a number of drones instead of just one, he said.

But with the funding, the company hopes to fully automate the drone, connecting it with artificial intelligence and machine learning for visual detection and tracking, Cicoria said.

The drone would use the software to fly itself, he said.

According to research by Colleen Cassady St. Clair, professor of biological sciences at the University of Alberta, 20,000 birds land on the tailings ponds annually.

Birds are more likely to land on tailings ponds in bad weather, especially wind and rain, and are also attracted by artificial light at night, St. Clair said.

Although robot birds have been used in the past along with other deterrents like loud noises to keep birds away, birds have a tendency to habituate toward stimuli, she said.

“Habituation just means that any animal, people included, can get used to any stimulus if it doesn’t have a negative consequence,” St. Clair said.

“If the drone continues to chase the bird around the pond, it should be the case that the bird finally decides it’s not worth it. It’s too energetically costly to hang out here. I’m going to go somewhere else,” St. Clair said.

Drone falcons are used at the Edmonton International Airport to prevent birds from interfering with aircraft.

Since 2017, drones have successfully reduced bird strikes at the airport 10, 15 to 20 per cent year over year, Cicoria said.

The company is working with Transport Canada to change the regulations allowing for autonomous flight over tailing ponds.

It hopes to have the autonomous drones fully operational in the next five to 10 years, he said.