This Mohawk woman is translating nursery rhymes to share her language with kids — and caregivers, too 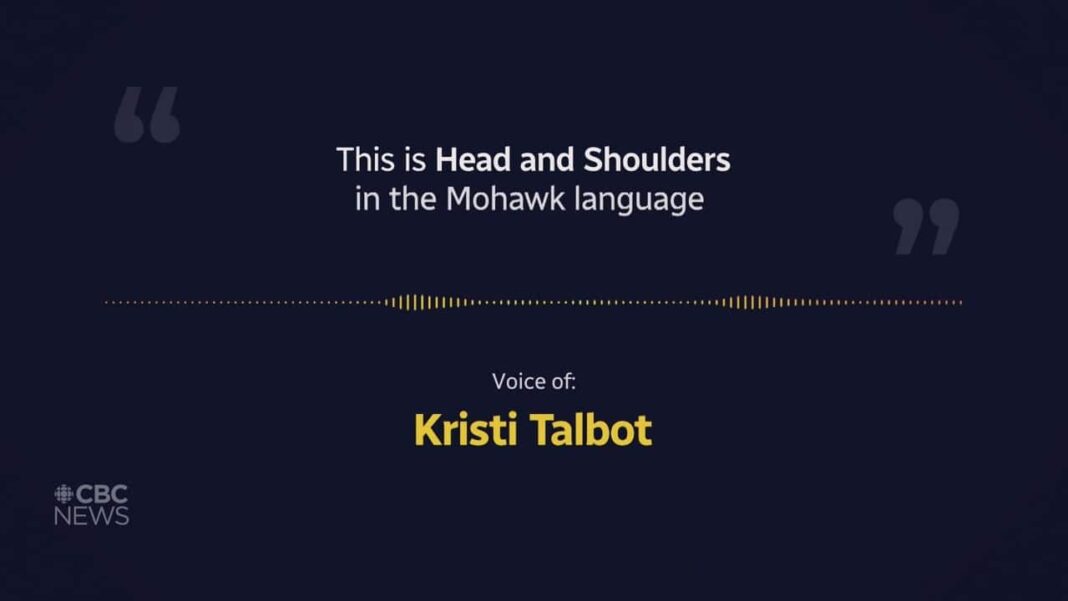 Like other Indigenous people in the early stages of reclaiming traditions, Kristi Talbot, a Mohawk woman with ties to the Six Nations community in Ontario, is prioritizing language revitalization.

“I’ve been taught by elders that passing on the language strengthens [our] values, as our traditions are woven into every word,” said Talbot, 32.

“As my mother broke generational curses herself, I hope to continue on that trend and do the same.”

Talbot, who is a new mother, is translating nursery rhymes into Kanien’keha (Mohawk) to share with her daughter and other families. It’s part of the process of bringing inherited blood memory of culture and language back to the surface.

“As a mother you want to pass on the good that you were gifted,” she said.

Talbot’s language journey began long before her daughter was born. At age 23, she graduated from early childhood education and began working for Aboriginal Head Start, a program based in Fort Erie, Ont., designed to teach culture and language to children in a parent-and-student environment.

She learned pieces of Kanien’keha while working in the program, like colours, animals and numbers. Later, she saw the difference in young students’ lives as they learned the language and fell in love with it.

I’ve been taught by elders that passing on the language strengthens [our] values, as our traditions are woven into every word.– Kristi Talbot

She then completed a two-year Mohawk language program with Onkwawenna Kentyohkwa, an organization based on Six Nations, and began creating curriculum for organizations like Fort Erie Aboriginal Head Start, Niwasa Head Start, Upper Canada District School Board and the Akwesasne Board of Education.

Then, when she became pregnant last year, she started to translate nursery rhymes.

“I thought ‘I still want to teach the language,’ so I reached out to see if there was any interest [from other new parents to learn],” she said.

There were over 100 responses to her inquiry first placed on social media channels in November, 2021. She garnered 67 students in the end for virtual classes, with a wide range of backgrounds including mothers, grandmothers, fathers, educators and caretakers.

“It was a lot of work, but it was worth it,” she said. “In my own path I saw how healing [the language] was for me and how much pride I had in learning my language and I’d like to share that.”

Like many within the Six Nations community, Talbot did not grow up enveloped in the language.

“That’s a few generations of not having culture involved in our family,” she said. “To bring that back to my family, as they are passionate about it and I can support them in that now too — [that’s] a part of sharing the story that it’s never too late to bring that back,” she said, adding that her mother and sister have been very supportive.

Talbot has already begun to share the songs with her daughter, who is now four months old, and she said that it is wonderful to see that the language will be carried on by both the parents that she teaches and her own child.

“I believe in my heart that my daughter, having been carried while I wrote and sang those songs, that spiritually, subconsciously, she knows those songs already,” she said. 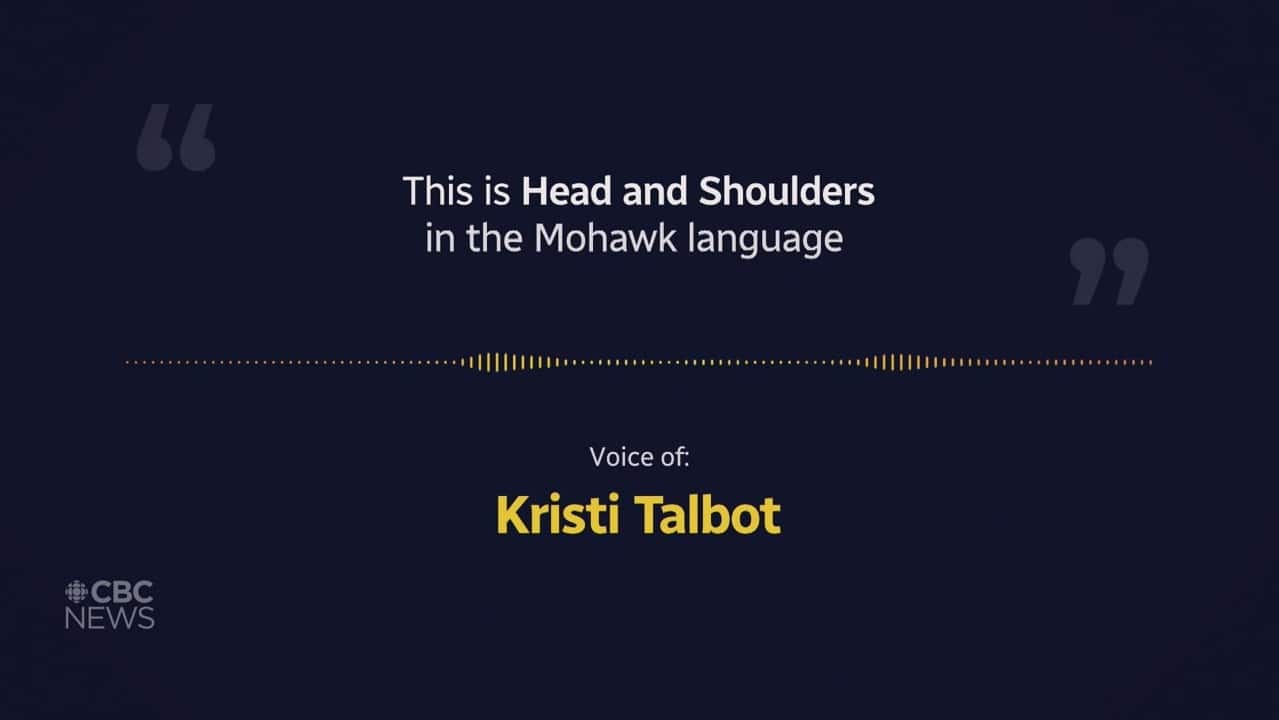 “The first time I sang one of the songs to her was when she was two months old; I was very surprised because she started to sing with me in a two-month-old way,” she said.

“Such a powerful moment and now, fast forward… we sing those songs everyday.  It’s so wonderful to know that her language journey is beginning at such a young age, when mine began so late. It makes me very happy that I can give her that gift and I feel very proud that she will be confident in the language.”

But Talbot emphasizes that having parents learn the language with the children is equally important.

‘What I saw in my experience was that these children were learning these songs, but then they went home and their parents didn’t know how to support them, they didn’t know those words. [Parents] expressed to me that they wanted to learn those words and to support their child and learn for themselves,” she said.

“I learned that it’s very empowering for yourself even at a later age. I kept that in mind when I designed this course — it’s a nursery rhyme course but it’s not meant for children. This is designed for educators and caregivers… to learn to teach the children.”

One of those parents is Shelby Chubb, a member of the Mohawk Nation of Akwesasne, near Cornwall, Ont.

The mother of two said that she was “very thankful” that the course was offered online. “This format was really helpful for me and it can reach other people who aren’t typically on or near the reserve anymore,” said Chubb.

In seeing the course posted to an Indigenous forum on Facebook, Chubb said it seemed like a perfect fit. “My daughters are six and three, so nursery rhymes are perfect for their age group right now, which was another reason I was interested in this course because my girls would be familiar with the nursery rhyme in English, so they would know the melody,” she said.

Chubb’s Totah (grandmother) was the last fluent Kanien’keha speaker in her family. “Due to racism and everything else that our people have been through, she didn’t pass the language on to my mother and therefore, not to me,” she said.

Chubb can read Mohawk words and sound them out but she says she lost much of their meaning in time.

“We had Mohawk classes in Mohawk school. But when I got to school off of the reserve and we had to choose languages for our middle school requirement, I decided to go with French and at that point I stopped studying Mohawk and had lost a good portion of knowledge. So I was looking to have that come back into my life again.”

Once she became a mother, that learning became even more important.

“Learning isn’t just for me now, but also for my children and the generations that come after me. If I don’t put in the effort to learn my history and my language and my culture, either my children have to take up that mantle or it will get lost for my family,” says Chubb.

“It’s just such an important part of our cultural identity to even hear Mohawk, much less understand it, that I wanted to make sure that even if I’m fumbling over my words or I’m not getting it right, my children hear Mohawk in our home and I do my best to use it with them.”

Either my children have to take up that mantle or it will get lost for my family.– Shelby Chubb

Having lived in Europe and learned pieces of Spanish, Japanese and French, Chubb has always been a language learner. She says she appreciates the delivery of Talbot’s nursery rhyme courses.

“She took the time to talk about the meaning behind the words. It wasn’t like a traditional grammar class or language class because we were learning the words from the nursery rhymes she put together, but music helps you learn languages,” says Chubb.

For example, Talbot translated the song “Let it Snow,” and used the word she:kon,  which is commonly used for “hello,” but is also used as “still,” or “again.” In that song, it is used, roughly, to say ‘it is still snowing.”

“I really enjoyed all of that background information that Kristi shared,” she said. “I got to expand on words I already knew and it was just really exciting to learn things I didn’t already know.”

Talbot will now be sharing the lessons even more broadly. She is scheduled to teach the nursery rhymes every Tuesday with the Art Gallery of Ontario throughout March.

She plans to make recordings of the songs as well, of which there are over 50, to help share them further.

“My ultimate goal as one who has begun to reclaim culture and language is that I can encourage people to do the same,” she said.

It’s all part of the larger project of ensuring the survival of the language for future generations.