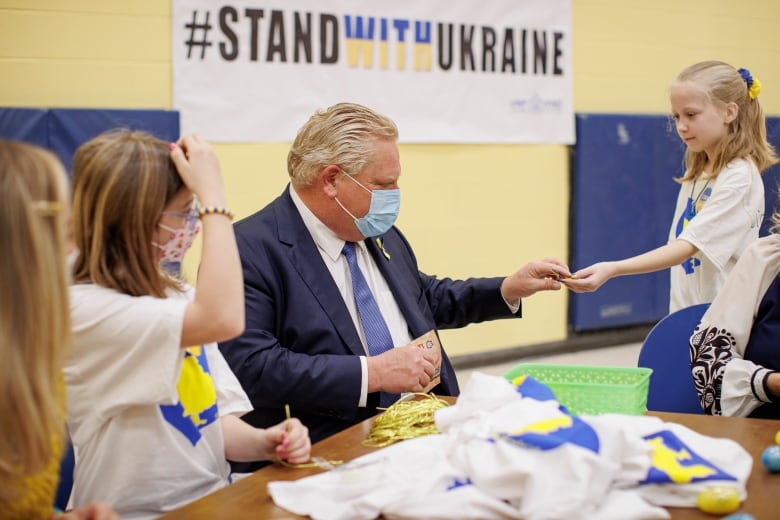 With the start of Ontario’s election campaign still two weeks away, Premier Doug Ford’s government has announced more than $10 billion in spending, fee rebates and tax cuts since early March and could unveil even more in next week’s provincial budget.

Ford and his ministers have rolled out the promises in a flurry of campaign-style announcements, many of them in ridings that are crucial to his Progressive Conservative Party’s chances of winning a second straight majority in the June 2 election.

The promises total at least $10.9 billion, according to figures compiled by CBC News, based on information provided by the government in news releases and emails (The full list of financial commitments is in the chart at the end of this story.)

In recent weeks, barely a day has passed without a multimillion-dollar announcement from Ford or one of his ministers.

The latest came on Tuesday, with news of $1 billion for the future redevelopment of Unity Health Toronto’s St. Joseph’s Health Centre. It follows a string of other events at hospitals in Scarborough, Barrie, Brantford, Brampton and Ottawa — all of which Ford attended — to announce money for construction or redevelopment planning.

“We’re making these announcements because it’s time,” Elliott said on Tuesday in response to questions from CBC News. She said many Ontario hospitals need to be renovated or replaced with new facilities because the infrastructure is outdated.

“There’s nothing new in this. This is something that we have promised the people of Ontario for a very long time,” she said.

Ontario Liberal Leader Steven Del Duca criticized the timing of the announcements, saying it’s evidence that Ford and the PCs are “focused on their own political self-interest” rather than governing.

Del Duca spoke during a news conference in Scarborough to announce a Liberal Party campaign plank on gun control.

The biggest single pre-election goody from Ford’s PC government is its refund of vehicle registration fees from the past two years. Refund cheques totalling $1.1 billion have been arriving in the mail throughout April at the homes of some 7.5 million vehicle owners.

The provincial treasury will also forgo another $1.1 billion in 2022-23 now that the licence plate sticker renewal fee for passenger vehicles and light-duty trucks has been scrapped. There are about nine million such vehicles in the province, previously subject to annual registration fees of $120 in southern Ontario and $60 in northern Ontario.

The other driver-focused promise from the government is the pledge to reduce provincial gasoline and fuel taxes for six months starting on July 1. The 5.7-cents-per-litre cut will mean a loss of about $645 million to the provincial treasury in 2022.

Ford was also front and centre at three announcements in the space of three weeks to dole out some $900 million to help the auto industry transition toward electric vehicle manufacturing.

The largest dollar figure that Ford has personally announced in recent weeks came in Toronto’s east end last Thursday, when he said $1 billion will be spent over an unspecified period to expand and redevelop hospital facilities in the Scarborough Health Network.

The PCs won four of Scarborough’s six seats in the 2018 election, two of them (Scarborough Centre and Scarborough—Rouge Park) by margins of less than 2,000 votes.

Other hospital announcements by Ford involved only small amounts of new money, although the potential political value looms far larger.

The premier travelled to hospitals in four other cities — all with swing ridings held by PCs — to announce funding for hospital planning, a preliminary phase far ahead of the start of actual construction.

Ford also made personal appearances in the past few weeks at a range of other events, including announcements of:

In early April, Ford and his ministers made a succession of announcements in ridings the PCs are targeting or aiming to defend in northern Ontario.

Ford travelled to Sault Ste Marie on April 8 to announce a boost to the electricity price subsidy for northern-based industries and to Timmins on April 10 to re-announce the government’s plans to revive the Ontario Northlander passenger rail service.

At two of the news conferences Ford attended, he did not announce new funding but presided over symbolic milestones for major multi-billion-dollar transit projects in Toronto.

On April 11, Ford flicked a switch to inaugurate tunnel boring for the Eglinton West extension of the Crosstown LRT. On March 27, he put a ceremonial first shovel in the ground for the Ontario Line subway project.

One of the busiest members of Ford’s government in recent weeks has been Paul Calandra, the minister of long-term care.

Calandra has made 10 separate announcements around Ontario since early March, promising new nursing homes or renovations of existing ones. Construction will not begin on the vast bulk of the projects until 2023 or later.

There are no prohibitions against government announcements in the weeks leading up to an election campaign.

Things will change once the campaign officially starts on May 4. Ford and his fellow PC candidates will be using party resources to unveil their promises, and the announcements will feature Ontario PC signage instead of Ontario government logos.

Ford’s Finance Minister Peter Bethlenfalvy is due to table the final budget of the government’s mandate on April 28. There isn’t enough time for it to pass before the legislature dissolves for the campaign, so the budget will only be implemented if the PCs win the election.
Share
Facebook
Twitter
WhatsApp
Pinterest
Linkedin
ReddIt
Email
Print
Tumblr
Telegram
Mix
VK
Digg
LINE
Viber
Naver
Previous articleB.C. Court of Appeal certifies former flight attendant’s class-action lawsuit against WestJet
Next articleSouth Carolina couple marries at Gander airport after falling in love with Come From Away