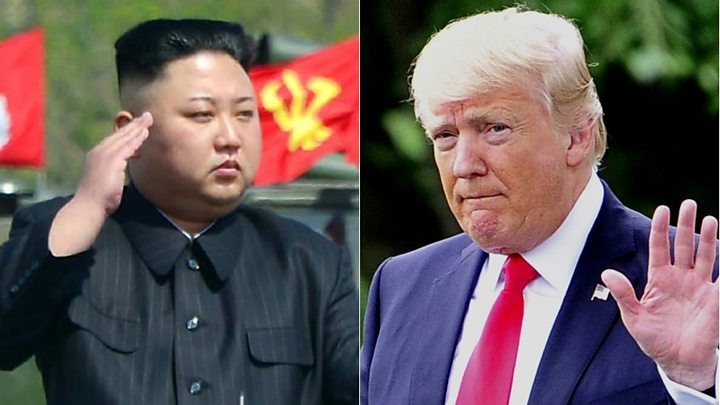 US President Donald Trump says North Korea “will be met with fire and fury” if it threatens the US.

His comments came after a Washington Post report, citing US intelligence officials, said Pyongyang had produced a nuclear warhead small enough to fit inside its missiles.

This would mean the North is developing nuclear weapons capable of striking the US at a much faster rate than expected.

The UN recently approved further economic sanctions against the country.

The Security Council unanimously agreed to ban North Korean exports and limit investments, prompting fury from North Korea and a vow to make the “US pay a price”.

The heated rhetoric between the two leaders intensified after Pyongyang tested two intercontinental ballistic missiles in July, claiming it now had the ability to hit the US.

Mr Trump told reporters on Tuesday: “North Korea best not make any more threats to the US. They will be met with fire and fury like the world has never seen.”

Perhaps Mr Trump believes that no hyperbolic threats should go unmatched or that apocalyptic warnings are the only ones the North Korean leadership will understand. Perhaps he – intentionally or not – is pursuing a Nixonian “madman” style foreign policy, where adversaries will tread lightly to avoid triggering the wrath of an unpredictable US commander-in-chief.

When the leader of the world’s greatest superpower, the only nation ever to have used nuclear weapons on an enemy, talks of unprecedented “fire and fury”, however, those words have consequences.

During his presidential campaign Mr Trump criticised his predecessor Barack Obama for not enforcing a red line against Syria’s use of chemical weapons. Now President Trump has drawn a fiery bright line of his own with North Korea – one that could commit the US to a perilous course of action if his words go unheeded.