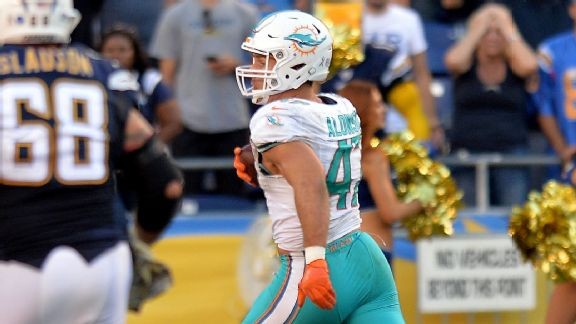 DAVIE, Fla. — Miami Dolphins starting linebacker Kiko Alonso is an avid fan of combat sports, including boxing and mixed martial arts. So much so, in fact, that Alonso modeled his touchdown celebration last season following a pick-six against the San Diego Chargers after Conor McGregor, arguably the hottest star in MMA.

However, Alonso believes McGregor has no chance of beating boxer Floyd Mayweather in their superfight proposed for later this year.

“A boxing match? C’mon, man. There’s no way [McGregor will win],” Alonso said this week during Dolphins organized team activities. “Mayweather is going to win. … McGregor is not going to beat any boxer. He’s not beating [Manny] Pacquiao obviously. He’s not beating any of those guys.”

In fact, Alonso predicts outright dominance by Mayweather and doesn’t think the fight will be close.

“I think it’ll probably just be a decision. It’ll be a shutout, 12 rounds to zero,” Alonso said. “He’ll probably start doing some Sugar Ray stuff, like swinging his arms around (laughter).”

“I got Mayweather in the fifth,” Landry said.

Not many people are giving McGregor a chance. Nevertheless, there’s plenty of money and hype surrounding this potential fight. Mayweather is expected to eclipse $100 million if the bout is made, and McGregor most likely will earn the highest purse of his career transitioning from MMA to his first boxing match.