Texas Gate road signs are commonplace in Alberta, but a mystery in the U.S. 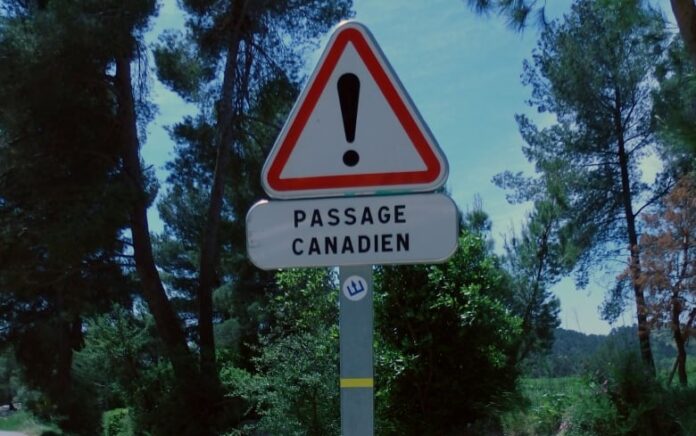 Some drivers slow down when they see the sign, others keep speed and let the metal bars ring out.

And sometimes, superstitious passengers lift their legs and touch the roof of the car with the tips of their fingers, kind of like you would do to cross a railroad track.

Cattle guards are everywhere in the Prairies. They’re even found in national and provincial parks. In Alberta, they are known as Texas gates. That’s how they appear on road signs, in some municipal legislation and provincial Hansard references.

But ask a Texan, and they might not know what you mean.

Even as a curator at the National Ranching Heritage Center at Texas Tech University, Robert Tidwell said a Texas gate isn’t a familiar term.

“I’ve just always heard them called cattle guards and that’s it,” Tidwell said. “It never dawned on me that it would have a name like a Texas gate elsewhere.”

In France, they are known as “passage Canadien.”

Tidwell says the name in Australia is similar to the Texas term: stock grids or cattle grids.

It’s not easy to trace the etymology of how “Texas gate” became a common term. Robert Bruce Shepard, a retired curator for the City of Medicine Hat, began researching when and why the term was popularized because museum visitors would ask.

“It’s an amusing situation where people from the United States come in and say: ‘Well, are only Texans allowed to use that road?'”

He’s come up with a simple answer.

“The name ‘Texas gate’ betrays its origins,” Shepard said. “For Canadians at least.”

Shepard is working on a manuscript focusing on the American presence in Western Canada.

Cattle guards were part of the American and Canadian rail systems before the 1900s. But when the automobile came into play, that’s when they started to litter the landscape, Tidwell said.

In the latter half of the 19th century and early part of the 20th century, the same groups of investors owned cattle operations in Australia, Canada and the United States, he says.

“There’s a lot of cross-pollination,” Tidwell said. “Cowboys are going to bring technology with them whenever they’re working.”

You can buy them pre-made, and while there are patents for both Texas gates and cattle guards, they never took off under any trademark. They’re easily made at home, Tidwell said.

The grid of bars is spaced just so, with gaps in between, making livestock and other hoofed animals wary to cross. That allows people in cars to access a piece of land without the need to get out of a vehicle and fiddle with a swinging or sliding gate — or even slow down, for that matter.

Tidwell points out they are an early form of automation, a way to keep things moving.

The infrastructure proved especially useful where ranching meets oil and gas operations. Texas gates don’t just keep animals in a paddock but can stop them from entering a dangerous site.

As a kid in Texas, Tidwell says his time on ranches meant learning how to get across cattle guards.

“Your feet are small enough that you could get your foot caught in the gap between the pipes,” he said. “I was always careful to get across a cattle guard as fast as possible.”

When you drive over one in the States., it means you’ve likely driven right onto someone’s private property, Tidwell says.

“It’s kind of like a sign to you that ‘Oh, OK, I’m driving through someone’s property to get to my destination,'” he said.

On today’s show: Calgary Mayor Jyoti Gondek joins us with a look at what she hopes the city can achieve in 2023; how Calgary is preparing for another busy year for international migration; we head to Texas for the story of the Texas gate and why they don’t call it that down there; we go on a toboggan ride with a few youngsters at Confederation Park.

But in Alberta, the grates are built into paved roads and are commonplace, not found just on range roads and ranches.

Letters from then superintendent P.J. Jennings and other officials included a photograph of the Texas gate, enclosing negatives for distribution in case other parks wanted to copy the design.

“The construction of this gate appears to be exceptionally good,” wrote parks controller F.H.H. Williamson to the Banff superintendent in 1940. “It should be satisfactory for the purpose intended and do away with the necessity of keeping a man at this point.”

The paddock’s keeper, living in a house nearby, no longer played an essential role — a cost saved by the Texas gate.

In his thrice-weekly column, the Calgary Herald’s Ken Liddell, who started writing for the newspaper in the 1950s, mentioned them often in a tongue-in-cheek fashion. The University of Calgary archives say Furrows and Foothills was a column about Western Canadian history and personalities.

“America has been called the country of inventions, but it cannot invent names,” he wrote in the Calgary Herald in 1967. ” In the northwest, there are half a dozen Red Deers, White Muds, Vermillions.… I’ll probably think of that each time I drive over a cattle guard called a Texas gate.”

In some Alberta municipalities, the Texas gates appear in bylaws — rules about where the popular piece of ranching equipment can and can’t be installed.

When asked about their use, and introduction in Alberta, a spokesperson for the transportation ministry didn’t have an answer and pointed to a short blurb from the University of Regina and Canadian Plains Research Center.

“The term is not to be found in many dictionaries or encyclopedias; it appears to have originated with the northern migration of cattle — the great cattle drives from Texas in the late 1870s.”

For Tidwell, cattle guards are just a thing people rattle over, though as a kid, he’d dig around them with a friend to see what kind of treasures fell out of a neighbour’s flatbed truck. The “couch cushion of the ranch” often had treasures like lost keys or coins.

He hadn’t heard of any superstitions about crossing a Texas gate or cattle guard, aside from folks with dental work being more careful and driving over them slowly.

“They say, ‘I don’t really care to have my bridge rattle out of my mouth’ or, you know, ‘have my dentures loosened,’ something like that.”

But from his office in Medicine Hat, Shepard thinks it’s more of a piece of identity that tells a story of how modern Canadian ranching came to be. And it’s something he’d like to further explore.

“To me, it’s an example of what makes this part of the world unique and different and exceptional,” Shepard said.