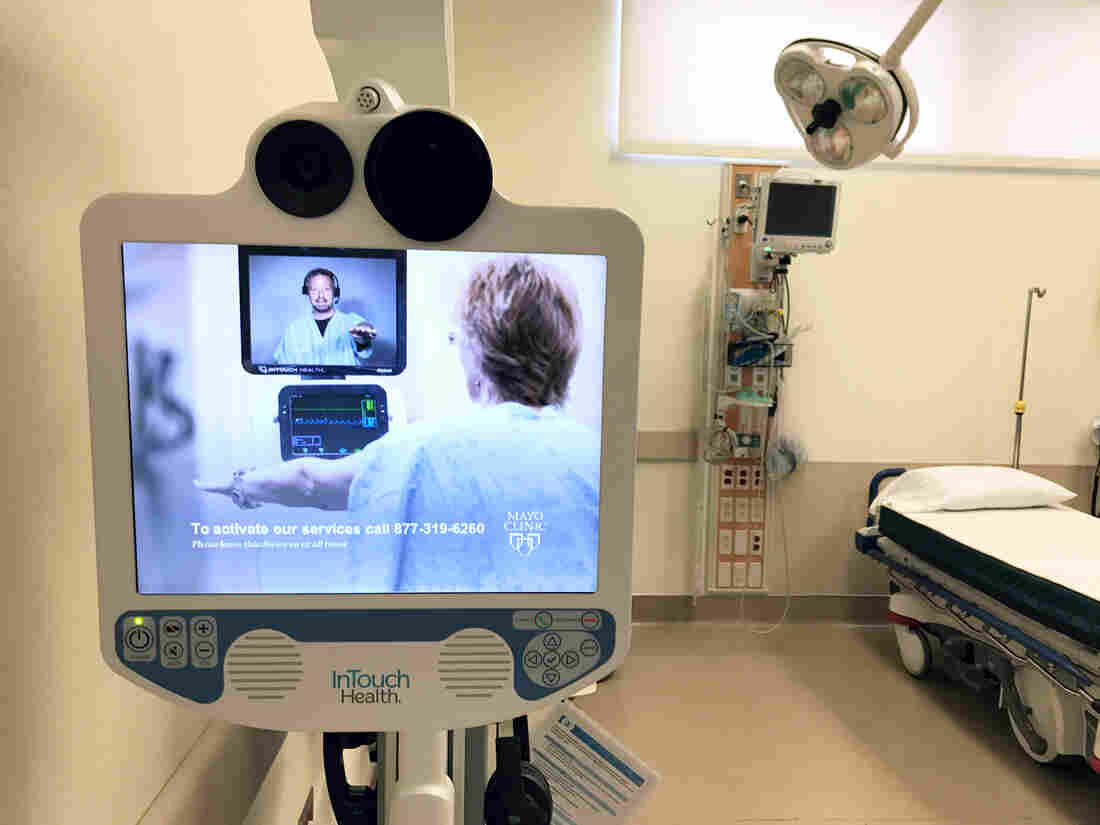 To help locals get the health care they need, the 14-bed Copper Queen Community Hospital in remote Bisbee, Ariz., has incorporated Mayo Clinic doctors into its practice — via telemedicine consultations.

For Heather Gijanto, going to the doctor means taking a day off work and driving at least 60 miles round-trip from her home in McNeil, Ariz., to the town of Bisbee. And that’s assuming there’s a primary care doctor available in Bisbee to get her in.

Gijanto is frustrated, and says she and her husband and their two young kids have had to change family doctors four times recently. Ideally, she says, the family would have one doctor who knew each member’s medical history, so “I didn’t have to explain my chart every single time, or have to go over medications all the time with each new physician.”

It’s long been hard to recruit new doctors to rural America. They can make a lot more money in metropolitan areas as specialists, and many choose to do that, especially if they’re saddled with mounting debt from student loans.

But the shortage, especially of primary care providers, has gotten steadily worse in recent years. According to the National Rural Health Association, rural areas could be short 45,000 doctors by 2020. And other trade groups warn those numbers of unfilled positions could loom even larger. Since 2010, more than 70 rural hospitals have closed.

The fallout is felt most acutely in small towns like Bisbee, which has a population of 5,400. The Victorian-era town has struggled since the 1970s, when the copper mines closed. Much of its economy now depends on tourists, who come to see the town’s well-preserved old West architecture and scenery, and to enjoy the local arts and music. But that income is largely seasonal. Bisbee’s full-time population has been steadily declining.

Today, says Mayor David Smith, a lot of Bisbee residents are uninsured, or rely on Medicaid. And this region has only about half the doctors it needs.

Copper from Bisbee, Ariz., is what helped win World War I. And yet, when we are in need, we are forgotten, because it’s not convenient, and because it’s not a whole bunch of people here that are voters.”

Located in the mountains about 5 miles north of the border between the U.S. and Mexico, Bisbee is remote. Smith says they’ve worked hard to improve the town’s amenities. Among other things, this summer the public pool is finally reopening.

Still, there is no movie theater. There is only one grocery store left in town, no soccer fields. Little things like these can be a deal breaker when it comes to recruiting new doctors and other professionals.

And though the shortage of doctors all across rural America is a crisis affecting some 90 million Americans, the problem is not even part of the health care debate in Washington right now. 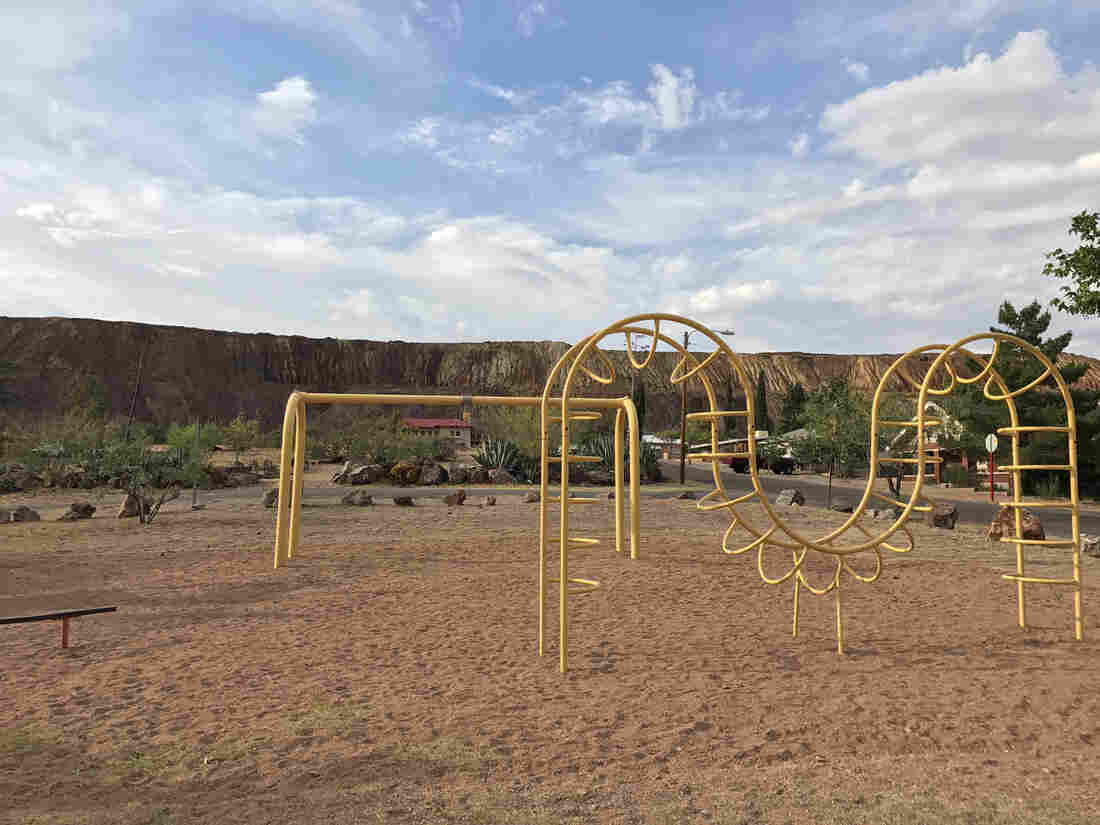 A mountain of mine tailings frame a Bisbee park — a legacy of the copper mines that once fueled the local economy. Kirk Siegler/NPR hide caption

A mountain of mine tailings frame a Bisbee park — a legacy of the copper mines that once fueled the local economy.

“Rural America is a forgotten America,” says Bisbee’s mayor, who believes the doctor shortage is just part of a broader story of rural neglect.

Smith points to the problem of student loan debt. Leaders in towns like this have long called for more generous debt-forgiveness programs for medical students, so that young doctors actually could afford to come out to underserved areas and work.

They’re starting to call the rural areas ‘the new inner city,’ because we have the same shortages and lack of access to care.”

The mayor says there’s no sign this is being addressed by national politicians. They talk about rural America, he says, but when they get here they realize it’s complicated, and they leave and wait until the next election.

“Copper from Bisbee, Ariz., is what helped win World War I,” Smith says. “And yet, when we are in need, we are forgotten because it’s not convenient — and because it’s not a whole bunch of people here that are voters.”

He sees the doctor shortage as the latest example of why people in towns like this are feeling left behind, untouched by the economic booms in many American cities. It’s a likely contributor to the country’s growing economic and cultural divide, Dickson says.

“They’re starting to call the rural areas ‘the new inner city’ because we have the same shortages and lack of access to care,” he says.

How do you have a thriving economy if you don’t have access to health care?

“They can’t export a health care system like you all have in [Los Angeles] and other places,” Dickson says. “Doctors don’t come here. Doctors want a reasonable income, and I don’t blame them.”

Dickson’s 14-bed hospital and health clinic sit at the base of a mountain of old mine tailings — a legacy, if a somewhat bitter reminder, of better economic times. Copper Queen is often held up as a success for its low-cost model of high quality, especially when so many other rural hospitals are closing, or facing the threat of closure. 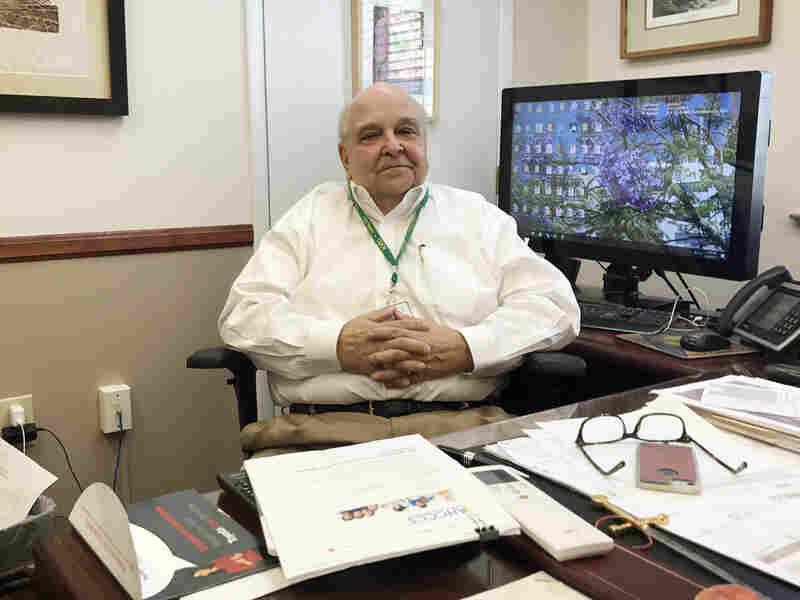 Rural hospitals have relied on foreign-born doctors who work in underserved towns in exchange for green cards, explains James Dickson, CEO of Bisbee’s hospital. But that’s changing. “They cap the number of visas and we can’t get doctors down here,” Dickson says. Kirk Siegler/NPR hide caption

Rural hospitals have relied on foreign-born doctors who work in underserved towns in exchange for green cards, explains James Dickson, CEO of Bisbee’s hospital. But that’s changing. “They cap the number of visas and we can’t get doctors down here,” Dickson says.

For now, Copper Queen has been able to get around the shortage of family doctors by incorporating telemedicine into its practice. Patients in need of specialty care or other emergency services can get consultations in real time from physicians at the Mayo Clinic. The hospital also has been able to hire more nurse practitioners and physician assistants.

But no one knows if these coping strategies are sustainable. Dickson thinks there’s another big problem, beyond the student loan issue, that’s being ignored: a shifting immigration policy that’s squeezing off the supply of young physicians from outside the U.S.

“They cap the number of visas and we can’t get doctors down here,” Dickson says.

Rural hospitals have relied heavily on foreign-born doctors who do residencies in underserved towns, in exchange for green cards. The cap means Dickson hasn’t been able to recruit a doctor to his hospital or clinic for 18 months.

No one is counting on a more liberal immigration policy under the Trump administration. And there’s a pervasive sense, in Bisbee anyway, that even if the national government weren’t divided, there’s only so much national leaders can do to solve the crisis.

Just as much of the responsibility lies within the local community, the mayor believes. Small towns like Bisbee that used to be wholly dependent on natural resources have struggled to reinvent themselves. Smith foresees some tough conversations.

“A lot of people still think that the mines are going to come back and resurrect this town. And of course that’s not going to happen,” he says. The mining industry has increasingly focused its business in South America. “Business practices have changed.”

It’s been hard for the economy to diversify, especially in a remote border region like this, Smith says. “And that hurts small towns with vision.”

Heather Gijanto, the mother of two who drives many miles to Bisbee for medical care, figures one of the solutions to breathing life into the region is to attract more private investment. She’s had the same job at a local Safeway for 14 years because she hasn’t been able to find much else.

“There’s not that much for people here,” Gijanto says. “There needs to be more options.”

More options, she says — and then maybe the doctors will come.