DJ Cuppy Flaunts with Her Baby Lion On Social Media 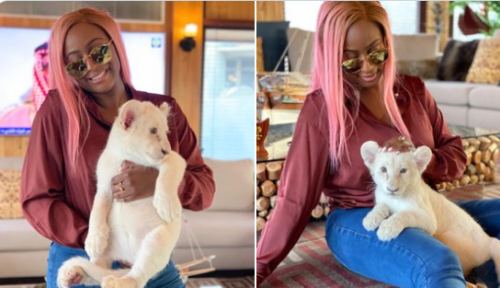 DJ Cuppy Flaunts with Her Baby Lion On Social Media

Nigerian popular DeeJay, DJ Cuppy has taken to her Twitter handle to share photos of her young lion and herself.

The daughter of billionaire business mogul shared two photos of herself and her ‘first child’ Cuppy on Wednesday evening to the surprise of her fans.

DJ Cuppy, a philanthropist, while sharing the photos, said she is really “excited to watch my firstborn baby “Cuppy” grow up into a beautiful lion.”

Excited to watch my first born baby “Cuppy” grow up into a beautiful lion! ???? Mummy loves you ? #FamePark pic.twitter.com/xhERZ3cdHs