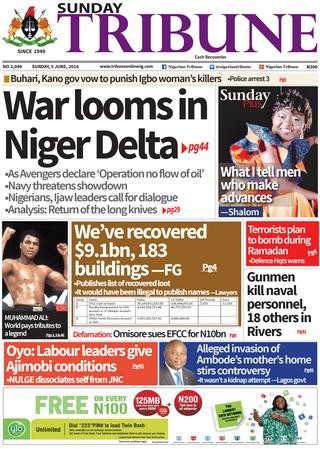 DESPITE the peace talks held between leaders of the Coalition of Northern Groups (CNG) and their counterparts of the Igbo extraction, Ndigbo are insisting on relocating their wives and siblings to the South-East before the October 1 quit notice deadline for them to leave the North.

This came just as a top member of the Ohanaeze Ndigbo, Kindness Jonah, disowned the Igbo leaders that met with the CNG leaders in Kano, the Kano State capital, on Friday, as part of efforts to reach a compromise on the standoff.

She said the pan-Igbo Organisation leadership did not represent Igbo interest as much as Indigenous Peoples of Biafra (IPOB ) does.

The highpoint of last Friday’s meeting was the setting up of 10-member joint to resolve the logjam, which necessitated a series of consultations and meetings at the instance of the Presidency with leaders from the North and the South-East some months ago.

According to some Igbo, who interacted with Sunday Tribune, there is no boing back on their resolve to relocate their wives and children to the South-East as they are not ready to leave anything to chance.

Though some of the leaders had declared that they were not going anywhere during the interactive  session with CNG under its  leader, AmbassadorShettimaYerima, the people said it was necessary to take preemptive measure, as Yetima said the quit notice would subsist.

The committee was given 72 hours to come up with a position that can douse the tension created by the quit notice.

The  president of EzeNdigbo in the Diaspora, Igwe Boniface Ibekwe, lamented that the quit notice was already taking a toll on the economy of the Igbo in the entire North and other parts of the country.

When Sunday Tribune visited the popular Abubakar Rimi market located in the heart of Sabongari, where most non-indigenes reside, the dominant issue of discourse was their plans based on the quit notice.

One Mrs Esther John from Anambra State told the Sunday Tribune that after exchanging greeting  by a friend, Madam Eunice Okechuwu, said: “my Oga has secured a self-contained apartment in Onitsha, paid a sum of N200,000 for a year.”

Also speaking, Igbo who identified himself as Baba Ebuka, who lived at Burma road, told Sunday Tribune: “life is for the living and I could recall that three months before the election my family moved to Nsuka in Enugu State.

“I thank God I am not like other Igbo who put all their eggs in one basket, as I have a house here in Kano. God has equally helped me to build one in my state. Therefore, before that time, my family will certainly move down to the house.”

In his own remarks, Chief Okafor Emmanuel, said: “I am not entertaining any fear because most of my children are grown up and many of them are already in Abia State, though my wife and I have equally made up our mind to relocate to where her children are.”