Derevyanchenko, Johnson to meet for bout 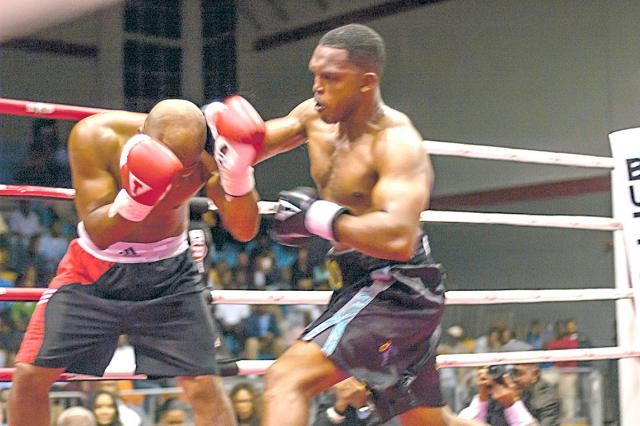 Middleweight contenders Sergiy Derevyanchenko and Tureano Johnson will meet for the right to fight for a world title.

“Sergiy Derevyanchenko and Tureano Johnson are two of the top middleweights in the world,” DiBella said. “This is a great opportunity on a big (platform) for Derevyanchenko to prove that he belongs with the elite fighters at 160 pounds.”

Derevyanchenko (10-0, 8 KOs), 31, was a decorated Russian amateur who now fights out of Brooklyn, New York. He earned his spot in the final eliminator with a second-round demolition of former world titleholder Sam Soliman 13 months ago. He stayed busy with a fifth-round knockout of previously undefeated Kemahl Russell on March 14.

“This is a very important fight for me,” Derevyanchenko said. “A victory in this fight brings me closer to my dream of becoming a world champion. I’m training hard for this challenge and I know that Johnson will be prepared. I’m going to show that I’m ready for anybody in the middleweight division.”

Johnson (20-1, 14 KOs), 33, a 2008 Olympian from the Bahamas, who is promoted by Golden Boy Promotions, earned a mandatory shot at Golovkin with a one-sided decision win against Eamonn O’Kane in an elimination fight in October 2015 on the undercard of Golovkin’s unification fight with David Lemieux. However, Johnson suffered a severe shoulder injury in the bout. It required surgery and Johnson did not fight again until scoring a second-round knockout win against Fabiano Pena on March 23. Because Johnson had been out for so long the IBF decided he needed to fight another eliminator.

“I fight to provide for my family, to bring pride to my country and because I know I have done the work necessary and am destined to become a world champion,” Johnson said. “I have a great respect for my opponent and expect a great fight, but he is my way toward the championship, so I will defeat him.”

“This is a great fight for me against a very good opponent,” Aleem said. “I want to build off my last performance and show even more dimensions to my game. Training camp is going well and I’m planning to execute my game plan on fight night. I’m trying to be a world champion and prove that I’m a force in this division.”

Aleem, 23, of Richmond, Virginia, scored a career-best victory in his last fight, an upset sixth-round knockout of hot prospect Ievgen Khytrov on Jan. 14.

Centeno, 26, of Oxnard, California, suffered his lone defeat, a 10th-round knockout loss to Polish contender Maciej Sulecki in June 2016. Centeno bounced back for a third-round knockout of Ronald Montes in December but has not fought since.

“I’m very excited to get back in the ring and I’ve been training hard since my last fight in December,” Centeno said. “I feel like I’m in great shape and I’m definitely looking forward to this fight. I know a win of this quality will put me into another echelon in the division. It’s very motivating to be training at (Freddie Roach’s) Wild Card Boxing (gym in Hollywood, California) with so many great champions as I prepare for this fight.”

The card will also include 19-year-old Cleveland junior middleweight prospect Charles Conwell (4-0, 4 KOs), a 2016 U.S. Olympian, who will face an opponent to be determined in a four-round bout.