Demonstrations in solidarity with Ukraine held across Canada on Sunday 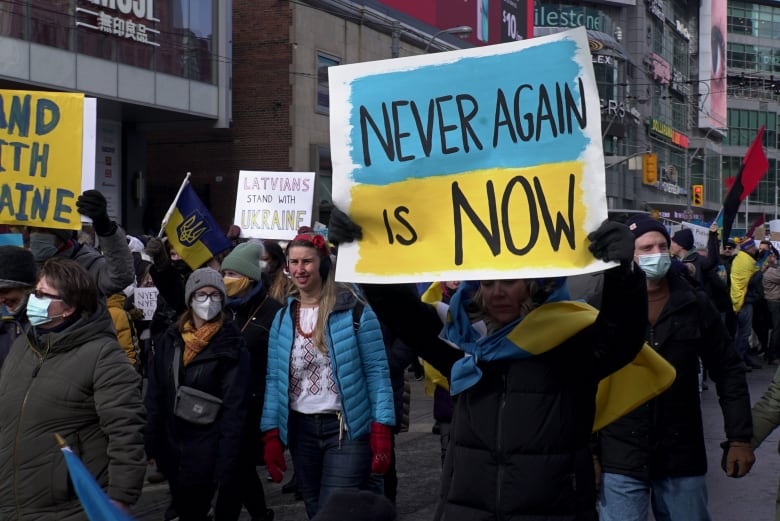 Demonstrations were held in more Canadian cities to show of solidarity with Ukraine on Sunday, which marked the fourth day of Russia’s wide-ranging invasion.

Russia’s ongoing attack has prompted condemnation by many world leaders and triggered a raft of sanctions.

Many Canadians gathered on Saturday as well to show their support for Ukraine. Protests against Russia’s invasion have been held around the world in recent days — including in Russia itself, where police cracked down on protesters.

Thousands of people marched in downtown Toronto on Sunday afternoon to protest the Russian invasion of Ukraine.

The event, billed as “Mega March for Ukraine,” was organized by the Toronto branch of the Ukrainian Canadian Congress.

During the march, the crowd chanted: “Stand with Ukraine!”

Hundreds of people at a rally in support of Ukraine in Toronto <a href=”https://t.co/gSAu12I1Ls”>pic.twitter.com/gSAu12I1Ls</a>

In Hamilton, hundreds attended a solidarity rally where people waved Ukrainian flags and held signs calling for the world to “stand with Ukraine” as people driving by showed their support by honking.

Thousands of Ottawa residents gathered outside the Russian Embassy in Sandy Hill on Sunday to stand united with Ukrainians and protest Russia’s invasion of Ukraine.

Afterwards, they marched through the city’s downtown core.

The colours of the Ukrainian flag were later projected onto the Peace Tower on Sunday evening.

Hundreds gathered in Kitchener-Waterloo on Sunday, as many Ukrainian-Canadians in the area grew increasingly worried about their loved ones caught in the conflict.

Sophia Gryshchenko, whose extended family lives in Kyiv and in western Ukraine, said the last several days have been extremely difficult.

“It’s just scary every day to be like ‘will they answer me the next day?'” she said.

“It’s been hard to focus on school right now and to get everything done. Sometimes it’s just hard to even believe and to process that it’s happening in the 21st century because it shouldn’t be happening.”

In Eastern Canada, a gathering in Charlottetown saw scores of people meet at city hall Sunday morning to take part in a rally to show support for Ukraine.

Some carried signs that read “Stop War” or “Stand With Ukraine.” A group of children waved the Ukrainian national flag and cars honked their horns as they drove by.

“Usually it makes me cry when I see that someone not from Ukraine shows their support,” said Olexsandra Bezruchko, who is from Ukraine and attended the rally.

“My relatives are still there…. They’re scared because they’re seeking shelter right now instead of just having a great, wonderful Sunday.”

In Quebec, there was an outpouring of continued support for Ukraine at a rally in downtown Montreal on Sunday. It was the fourth day in a row that Montrealers had come out to protest in opposition of the invasion.

Demonstrators had previously gathered outside the Russian consulate in Montreal.

“Most people here have family in Ukraine and we need to congregate and stay together in our own community to show support to one another,” said Michael Shwec, the president of the Canadian Ukrainian Congress.

“We’re calling on all governments of the world to support creating a n- fly zone over Ukraine.”

In the Prairies, protesters showed their support for Ukraine at rally in Saskatoon on Sunday.

Demonstrators gathered in Edmonton as well.

In British Columbia, about 150 people in Prince George gathered on the city hall steps on Sunday as part of a rally organized by St. George’s Ukrainian Church.

The people gathered heard from Mayor Lyn Hall, members of local First Nations communities and shared songs and prayers for those in Ukraine.

Svitlana Koptyeva, the organizer of the Sunday demonstration, came to Canada from Ukraine10 years ago.

She said these are extremely difficult times as her brother and mother still live in Ukraine.

“I feel scared for them,” she said. “This is something that everybody kind of knew would happen, but never believed it actually would.”

The ongoing demonstrations taking place in Canada echo the sentiments of those opposing the war around the globe.

In Russia, police detained more than 2,000 people at anti-war protests in 48 cities across the country on Sunday, a protest monitoring group said.