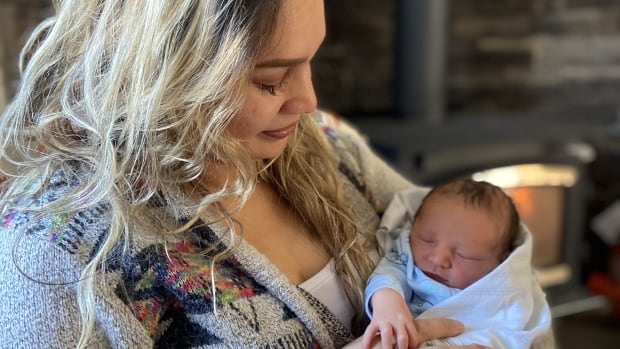 For the first time in decades, some in Sturgeon Lake First Nation, Sask., feel they’ve truly welcomed a baby into this world on their own terms.

The First Nation, located about 40 kilometres west of Prince Albert in central Saskatchewan, is one of three participating in a pilot project to bring cultural birthing back to First Nation communities in Canada.

On Wednesday a baby boy was born, welcomed in ceremony and with the First Nations traditional birth practices top of mind.

“A lot of those things were never lost,” Christine Longjohn, the First Nation’s band councillor responsible for health, said.

“We just weren’t practicing them the way we should have, because of all of what First Nations people have gone through.”

Help was drawn from elders, knowledge keepers, birth experts, midwives and health professionals both within and outside of Sturgeon Lake to create the community’s soon-to-be cultural birthing centre and and revitalize the practices in the community.

“We are rebuilding our nation, is actually what we are doing, because when we have healthy babies, healthy children, then we will have a healthy community,” she said.

Though a proper birthing facility won’t be built until the fall of 2022 at the earliest, the concept design for a new facility is expected to be unveiled in mid-March.

Norma Rabbitskin, a senior nurse in Sturgeon Lake — whose daughter gave birth on Wednesday — said knowledge shared by elders and knowledge keepers with the First Nation is being shared with the professionals supporting pregnant mothers in Sturgeon Lake.

Those professionals put that knowledge to use on Wednesday and will continue to do so going forward.

Soon, they will have a facility of their own to work in, too. In mid-March the First Nation will unveil the concept designs for the birthing facility it would like to see operating by this fall, if things go smoothly, Longjohn said.

Rabbitskin, who said she and her mother were born on the lands, said it was an honour to see her daughter choose a traditional path when it comes to birth — a way, she said, her daughter was practicing one of her most sacred rights.

“I’m sure my ancestors are rejoicing, [because] they are happy to participate all the way though the ceremonies because we were advising and we were acting for their guidance for this little one who is coming down from the spirit realm.”

Those deemed a low-risk pregnancy, she said, who have shown they’re willing to commit to practicing the traditions and ceremonies related to birth are invited to partake in the First Nation’s birthing strategy.

It’s all based on choices though, Rabbitskin said and those who don’t want to participate don’t have to and can go for a more contemporary approach to birth if they choose.

For some, a more traditional birth is seen as a more welcoming way to bring new life into the world. Longjohn said her own mother was forced to isolate with her as a newborn years ago because she wasn’t born in the hospital.

That experience, Longjohn said would be traumatizing for some and is part of what the birthing centre in Sturgeon Lake is hoping to combat.

The work being done in Sturgeon Lake, embraced Treaty Six’s medicine chest clause, Bighead said, which has been interpreted to make it so First Nations people have a right to health care, be it through western medicine or traditional medicine.

“I believe, [the medicine chest clause] is why the federal government is forthcoming with the financial and moral support for our undertaking,” she said.

Part of a growing history

The Sturgeon Lake First Nation birthing centre and traditional practices around birth are part of the First Nation’s efforts to reclaim its health care, rooted in its own culture Rabbitskin said.

The birthing centre and the practices that will be taught through it are part of the First Nation’s overall strategy looking at holistic health.

Bighead said in 1995, Sturgeon Lake First Nation’s governance transferred control of first-level services, like health care, from what was then the First Nations and Inuit Health Branch of Indian and Northern Affairs Canada.

Through doing that the First Nation developed its own westernized model of health care, Bighead said. That includes legislation that allows for traditional midwifery and other practices related to birthing, allowing for the community to practice its cultural ways when it comes to health care and births.

“At that time we talked about the fact that we are First Nations; that we did not just want to be like any medical clinic, walk-in clinic, whatever you may have, we also wanted to have the opportunity to deliver traditional health services to those membership that wish to participate,” she said.

“This is the first very important step and one of many in this fantastic, awesome journey that we are on.”