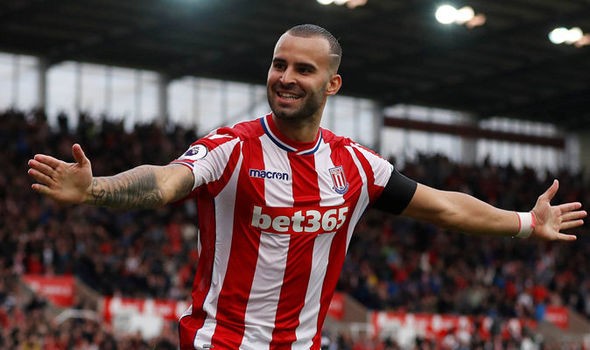 Jese, who was thrust straight into Mark Hughes’ side after arriving from Paris St-Germain on Wednesday, slid in from a tight angle after being left unmarked to pick up Saido Berahino’s pass.

The Spaniard’s strike came just 90 seconds into the second half, after an opening 45 minutes the visitors had dominated.

Arsenal thought they had equalised when Alexandre Lacazette rifled in, only for the France striker to be ruled offside.

The Gunners continued to press in the closing stages but Stoke, who had only 23% possession, remained resolute to earn their first win of the Premier League season.

Stoke have managed to attract a few players with impressive pedigree over recent seasons, but perhaps none more exciting than Spain international Jese.

The 24-year-old forward was considered one of the best products of his generation in the Real Madrid academy by some observers, only for his career to stall after he suffered a serious knee injury – ironically as a result of a challenge from Arsenal opponent Saed Kolasinac, who was then playing for Schalke – shortly before the 2014 World Cup.

After failing to force his way back into Real’s plans following his recovery, an underwhelming spell at French giants Paris St-Germain followed before he attempted to rebuild his career with a loan move to hometown club Las Palmas.

The La Liga side decided he did not offer enough to warrant a longer deal – amid reports he was distracted by his rap band – which has allowed Stoke to bring him to the Premier League.

On the evidence of his match-winning debut, it may prove a shrewd signing by Potters boss Hughes.

Jese showed glimpses of his attacking flair and willingness to work throughout, none more so than for what proved to be the only goal of the game.

He started the move on the halfway line, driving forward with pace and purpose, before finding substitute Berahino on the left and then continuing his surge to collect a return pass and convert.

Eventually he ran out of steam – unsurprising after being left out of PSG’s pre-season plans – and received a standing ovation when he was replaced after 70 minutes.

Stoke fans will be hoping his goal was the first of many during his season-long loan.

Stoke has long been considered a place where Arsenal’s soft underbelly gets exposed against a physical home side – and so it proved again.

Arsenal won for the first time in seven trips to the Potteries when they cruised to a 4-1 victory at the end of last season, leading Arsene Wenger to confidently predict his team could cope with the challenge posed by the home side.

But, as has been an all too familiar sight for Gunners fans, they lacked steel and aggression in key areas of the pitch.

This was illustrated in the build-up to Stoke’s winner.

A sloppy pass from Granit Xhaka towards a flat-footed Mesut Ozil gave the ball back to Stoke, with neither player working hard enough to retrieve the ball as Jese broke forward.

“We know not to make defensive mistakes and we came out after half-time too sluggish. We were punished,” said a frustrated Wenger.

In truth, Arsenal could have already been well in command after a dominant first-half performance in which they had over 70% possession.

Still without the injured Alexis Sanchez, the visitors forced Potters keeper Jack Butland into a string of a splendid saves, particularly from angled drives by Aaron Ramsey and Danny Welbeck, while Arsenal’s players also felt they should have been given a penalty when Hector Bellerin was clumsily bundled over by Stoke forward Mame Biram Diouf.

Wenger was also aggrieved that Lacazette was called offside by the tiniest of margins as they chased an equaliser.

“I believe we scored a regular goal that was not offside. It is an easy decision. When the ball is kicked he is not offside,” he added.

The Gunners boss threw on substitutes Oliver Giroud – who rescued them in their opening win against Leicester – Theo Walcott and Alex Iwobi in the final stages, but the forwards could not mask their team’s defensive deficiencies for the second game running.

Possession is not everything… – the stats

Stoke boss Hughes has the chance, perhaps, to rotate his squad when the Potters host League One side Rochdale in the EFL Cup on Wednesday (20:00 BST).

Arsenal are not in midweek cup action as the Europa League qualifiers do not enter the competition until the third round, meaning they have an eight-day break before travelling to Liverpool in the Premier League next Sunday (16:00).