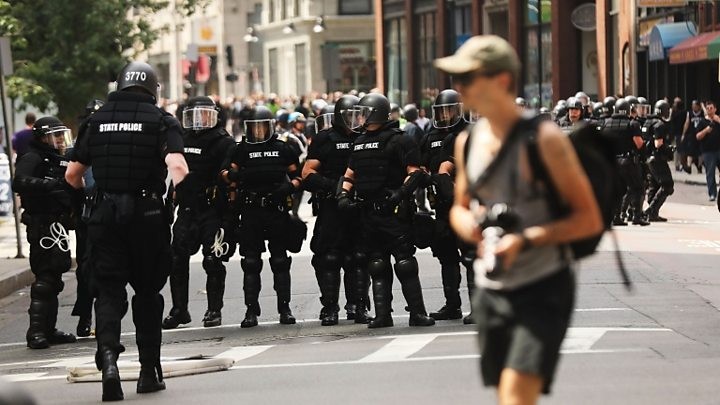 Tens of thousands of anti-racism protesters have opposed the “Free Speech” rally in the US city of Boston that featured right-wing speakers.

The rally on Boston Common, which attracted only a small crowd, disbanded early and the participants were escorted out by police.

The organisers had said they would not give a platform to racism or bigotry.

The Boston Herald reported that up to 30,000 people attended the counter-protest. Demonstrators had gathered at a Boston sports centre and then marched en masse to the common.

The BBC’s Aleem Maqbool, at the scene, said those who turned up for the conservative rally were confined to the bandstand area on Boston Common.

Crowds of anti-racism protesters totally surrounded the bandstand but were kept some distance away, he added.

Many wore stickers showing the face of 32-year-old Heather Heyer, who died when a car was driven into a crowd of counter-protesters at last Saturday’s far-right rally in Charlottesville.

“It’s time to do something. We are out here to add an extra body to the numbers of those who resist,” said Katie Zipps, who travelled from Malden, north of Boston, for the counter-protest.

The crowd chanted “No Nazis, no KKK, no fascists in the USA!” and carried banners with slogans such as “Stop pretending your racism is patriotism”.

Hundreds of police officers, many on bicycles, were deployed. Large vehicles and concrete barriers were positioned to prevent access to the park.

The organisers of the rally said that “misinformation in the media” was “likening our organisation to those that ran the Charlottesville rally”.

“While we maintain that every individual is entitled to their freedom of speech and defend that basic human right, we will not be offering our platform to racism or bigotry,” the group wrote on a Facebook page dedicated to the event. “We denounce the politics of supremacy and violence.”

Chris Hood, an 18-year-old Boston resident standing among others planning to join the “Free Speech” rally, told Reuters news agency: “The point of this is to have political speech from across the spectrum, conservative, libertarian, centrist.”

President Donald Trump has praised police but criticised what he termed “agitators”.

There were no reports of wide-scale violence but protesters jeered at those taking part in the rally and some threw water bottles.

There were also scuffles between protesters and police, and some arrests. The Boston Globe newspaper reported that 20 people had been held.

Some rally participants needed a police escort to leave the park.

The list of speakers for the event changed a number of times in the days ahead of the gathering. At times it included speakers who have been associated with the far right.

The violence in Charlottesville began with a protest and counter-protest over the planned removal of a statue of Confederate commander General Robert E Lee.

In the aftermath, Confederate statues across America have come under renewed scrutiny.

Should Washington and Jefferson monuments come down?

Duke University in North Carolina removed a statue of Robert E Lee from its chapel entrance in the early hours of Saturday morning, following vandalism earlier in the week.

University President Vincent Price said the decision was made for safety reasons and “above all to express the deep and abiding values of our university”.