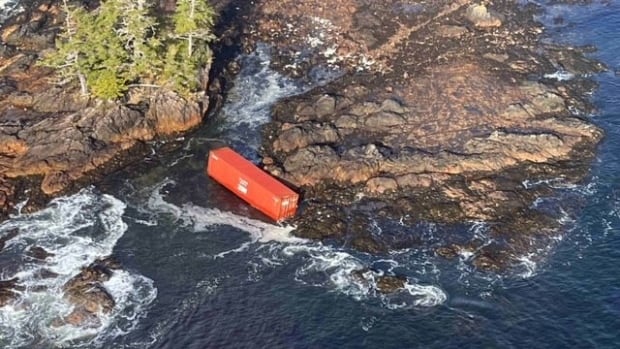 The Canadian Coast Guard (CCG) says four containers from the MV Zim Kingston have been spotted near Cape Scott at the northwestern tip of Vancouver Island.

They were among some 109 containers that fell from the stricken cargo ship last Friday during a major storm. Crew members were evacuated from the same ship the following day due to a fire on board.

In a tweet sent Wednesday, the coast guard said at least one of the four containers carrying refrigerators had broken open.

The containers have been identified and referenced against the ship’s manifest. None of them are among the two with hazardous chemicals that were previously identified as having gone overboard, according to the coast guard.

Chris Lindsay, owner of Cove Adventures, said that some guests described seeing a shipping container that had washed ashore near Cape Scott while on a float plane tour on Wednesday.

“Today I was thinking about it and I was like ‘I bet that’s the container that came off of that ship.'”

Hayden Argyle was the pilot on Lindsay’s tour. He said that he saw several refrigerators and some garbage littering the beach.

Fisheries and Oceans Canada said in an update that another one of the four containers was spotted by Transport Canada’s National Air Surveillance Program (NASP) near Cape Sutil at the northern end of the Island on Thursday afternoon.

The contents of that container appear to have washed ashore at Palmerston Beach on the Island’s northwest coast. A Vancouver Island resident posted photos to Facebook of the debris which includes refrigerators, toys, hair products, and food.

The MV Zim Kingston first ran into trouble Oct. 22, when it lost 40 of its shipping containers in rough waters, 70 kilometres west of the Juan de Fuca Strait, which separates Washington state and Vancouver Island. It was on its way to Vancouver at the time.

The coast guard tweeted that the ship’s owner is preparing to recover the four containers and has hired an environmental company to advise.

Fisheries and Oceans Canada said that they are “satisfied with the actions taken by the owner both with the ship itself, and in efforts to recover the containers and debris.”

Rachel Blaney, the MP for the North Island-Powell River district said she is very concerned about the impact of all of this on the environment.

“It’s quite startling just how much debris is up on some of those beaches,” she said. “We are of course extremely concerned about any hazardous materials that might be in the water and the impact it could have on sea life.”

The CCG said that modelling predicts that containers that are still floating will continue to move north.

The World Shipping Council’s 2020 report estimates an average of 1,382 containers are lost at sea each year.

Stefana Lamasanu, senior communications adviser for Transport Canada said in a statement that most containers sink rapidly to the ocean floor once they fall into the water.

“Depending on their contents, some may stay afloat for days or even weeks before sinking.”